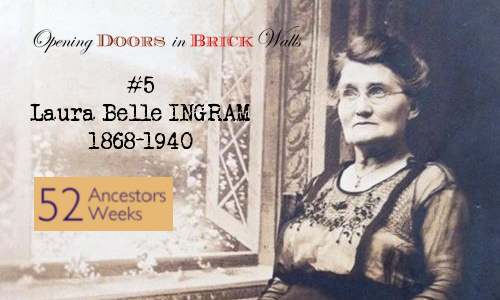 Writing for the 52 Ancestors in 52 Weeks Challenge is helping me take a closer look at the who, what, when, where, why, and how for each ancestor.

When I lived with my paternal grandmother Myrtle Hazel ROOP in 1976-1977 she gave me an old book that had belonged to her mother-in-law, my great-grandmother Laura Belle INGRAM. It has that unique old book smell and is missing the cover. The pages have a yellowish stain and brown spots. The binding is cracked and the book opens to what I think might have been a page that Laura referred to often.

Search Lights on Health (short title) was sold only by subscription. I was surprised to find that it has been included in the Project Gutenberg as an eBook. The Internet Archive has images of the book online. It is public domain and I’m using images that I photographed from the book to illustrate Laura’s story.

Following the Civil War a little family of three, Irvin Lewis INGRAM, his wife Mary M. DEMPSEY, and their daughter Octavia Dell born in March 18661 was living on Ingram Branch of Loup Creek in Fayette County in the newly formed state of West Virginia. Irvin and Mary married on 23 May 1867.2 The family grew when their second daughter Laura Belle was born on 24 April 1868.3 Neither Octavia’s nor Laura’s births were recorded in the birth register of the county. The family of four was not enumerated on the 1870 census. The year after the census on 6 March 1871 a third daughter Harriet F. was born on Loup Creek.4

By the time the 1880 census was enumerated, the family was still made up of only the parents and their three daughters.

Octavia INGRAM married Elijah Lewis DEMPSEY on 19 October 1882.6 It isn’t known how Octavia and Elijah came to meet and court. She lived in the Fayetteville District and he lived in the Mountain Cove District, both districts in Fayette County.

Laura, 14 years old at the time, most likely had finished her eight years of education that spring.

We can assume that the INGRAM and DEMPSEY families must have gotten along as two years later Laura Belle INGRAM and William Henderson DEMPSEY, brother of Elijah, were married. 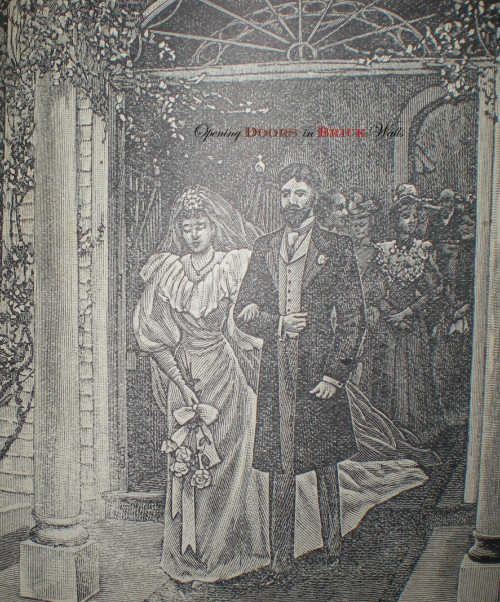 On Wednesday, 1 October 1884, I. C. Cavendish performed the marriage of W. H. Dempsey, 24, and Laura B. Ingram, 16, in Fayette County. The bride and groom were both born and residing in that county at the time of marriage. William was a miner.7

Mary M. DEMPSEY, the mother of the bride, appears to have died before 11 February 1888, as Irvin Lewis INGRAM, widowed, is seen marrying on that day.8  Two children were born to this marriage although little is known about this second family. But I am getting sidetracked and that is a story for another time.

Laura gave birth to her first child Viola in 18859  and carried her to her grave in 1887 after the child died of consumption.10  A year later we see William and Laura living at Keeneys Creek where sons Willie and Ernest were born in 1888 and 1890.11,12

By 1892 the family of four had moved on to live in Prince (Fayette County) or across the New River in Royal (Raleigh County). Royal Coal and Coke Company, the first coal mine in Raleigh County was opened at Royal in 1891. Necessary company buildings were constructed and workers commuted from Prince or nearby farms on the Royal side of the river until accommodations were available. At this time, it is only an assumption on my part, that Laura’s husband William, who worked as a miner, was employed at the Royal Coal Co. when son Oscar was born on 24 September 1892.13 The fact that Oscar’s birthplace has been seen as Prince and Royal points to this possibility.

Two years later Laura’s fourth son Roy was born in Victor, a mile east of Ansted.14 The family continued to grow with five more children being born in Victor where the family had set up their permanent residence when William bought a piece of land in 1899.15 A daughter Pearl was born on 25 January 1897.16 My grandfather Fred Rothwell was born on 30 October 1899.17 Clyde Lewis was born on 13 April 1902.18 Hester Ethel was born on 21 September 1904.19 Lastly, Earl Stanley was born on 15 November 1910.20

Six months prior to the 1899 land purchase Laura and William lost their daughter Pearl at the age of 1 year 7 months 2 days to Diptheria.21

Laura Gives Birth To Her Youngest

In January of 1910 Laura’s first grandchild Olive, daughter of son Willie, died at age 3 months 15 days.22 She must have felt the loss of her own first child all over again. While mourning the loss of her first granddaughter she lost her father Irvin Lewis INGRAM who died on 4 March 1910, in Turkey Creek, Fayette County.23 This was about the same time that Laura became pregnant with her 10th child at the age of 42. 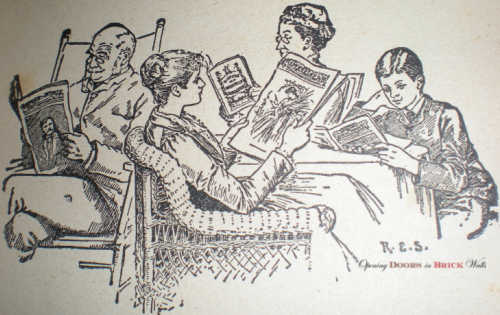 Laura gave birth to 10 children over a period of 25 years and raised 8 of them to adulthood. All of her children attended at least 8 years of school. Son Clyde finished 10 years. Daughter Hester attended two years of college and became a school teacher. Son Roy may have also attended 2 years of high school as it is unlikely that he had only a second-grade education as indicated on the 1940 census.24

The Family Worshipped & Served Their Lord at Hopewell Baptist Church

Times were changing when the Great War I began on 28 June 1914. Before the end of the war on 11 November 1918, Laura and William lost their oldest son Willie, killed on 5 October 1915.26 He had gone into a small mine at his home, accompanied by his wife and little son Gordon, to mine some coal for home use. While his wife was watching him a heavy fall of slate came in on him, killing him instantly.

By 1920 Laura’s three oldest living sons and her daughter-in-law Mallie, Willie’s widow, had married. She was the grandmother of ten. Fred and Clyde were still living at home, working as miners. Hester (15) and Earl (9) were attending school.27

By 1930 Laura and William were living alone in their home. Their son Ernest was renting a home nearly next door.30 All of their seven living children were married and raising their own families. The couple would have ten more years together before their son Fred, his wife Myrtle, and their children would come to live with them and care for them until their deaths.

Mrs. Laura Dempsey
Mrs. Laura Ingram Dempsey, 72, of Victor died yesterday at her home after an illness of 12 days. The body was removed to the Thomas mortuary, Ansted. Services will be held tomorrow at 2 p.m. at the Hopewell Baptist church with Rev. George B. Deaver officiating. Burial will be in McVey cemetery on Shade creek.
Survivors include her husband, William H. Dempsey; a daughter, Mrs. Hester Skaggs of Ansted, and five sons, Ernest Dempsey of Ansted, Roy Dempsey of Fayetteville, Clyde Dempsey of Kaymoor, Fred Dempsey of Victor and Earl Dempsey of Lansing.

Her husband William Henderson DEMPSEY joined her in their heavenly home on 24 January 1941.32

Laura and William had 36 living grandchildren in January of 1941. Three more grandsons would be born by 1944. As of this writing, six are still living. (Four are living as of 28 January 2022.)

This Post Was Updated on 28 January 2022: Missing source citations were added, the photos were watermarked, and some corrections were made to the text and format.