I promised a follow up on this mystery but did not expect it to be so soon. I cannot believe how fast things got moving once people read the story.

As seen in my original post The Mystery of James C. Crouse Sr.’s Grave Marker Anita McClung and Sandra Humphries Raedel from the Facebook group Fayette County West Virginia Genealogy were the first to help on April 28th.

On Saturday, May 3rd I searched Facebook and found a page for Fayetteville Huse Memorial Park and Mausoleum. I liked the page and took a look around. There were several photos of requested markers.

I was a bit hesitant to request a photo of the marker as the cemetery is quite large and I had no idea of the plot’s location. In the Notes section of the page, I found burials listed in alphabetical order. They included the block, lot and grave numbers.

I sent a private message to the admin of the page requesting a photo of the marker of James CROUSE Sr., block 1, lot 38, grave 4 and included the link to my unpublished blog post as an explanation to why I was interested in this particular marker. An hour later I received a message from the page administrator that she would get the photo for me on Monday.

I posted The Mystery of James C. Crouse Sr.’s Grave Maker as scheduled on Sunday. Monday morning I had a message from Sonya of the Huse FB page, “I have placed the picture of the marker along with monument and other markers associated with your request under ‘Various pics requested’. Hope it helps.“ 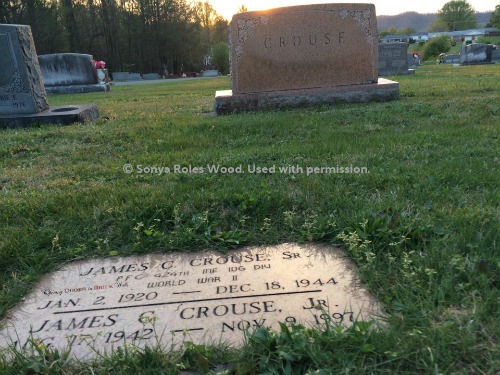 Of course, it helped! Sonya took time on a Sunday evening to perform this act of kindness, taking not only a picture of James’ marker but also of the family monument and his parents’ markers.  Thank you, Sonya!

I shared the photos with James C. CROUSE’s granddaughter Marian. As soon as she saw the marker she remembered that her stepmom had put a new marker on the graves after her Dad’s burial.

Sonya told me, “Most of the time when a family changes a marker, then they will take the original marker home. Very few say throw it away.”

Presently speculation is that the marker found in the garage is most likely the marker that was on the grave of James C. CROUSE Sr. from 1949 until the burial of his son in 1997. Even though the application for the marker had the wrong cemetery listed it appears to have been placed in the right cemetery.

The question that remains is how did the marker end up in the garage? One of my helpers offered to “go to the courthouse and dig a little” [search the deeds at the courthouse to see if the Crouse family once owned the home where the marker was found].

I hope that once all parties have gotten in touch with each other the marker will be returned to the family. It would be nice to write a “closure” post on this mystery.