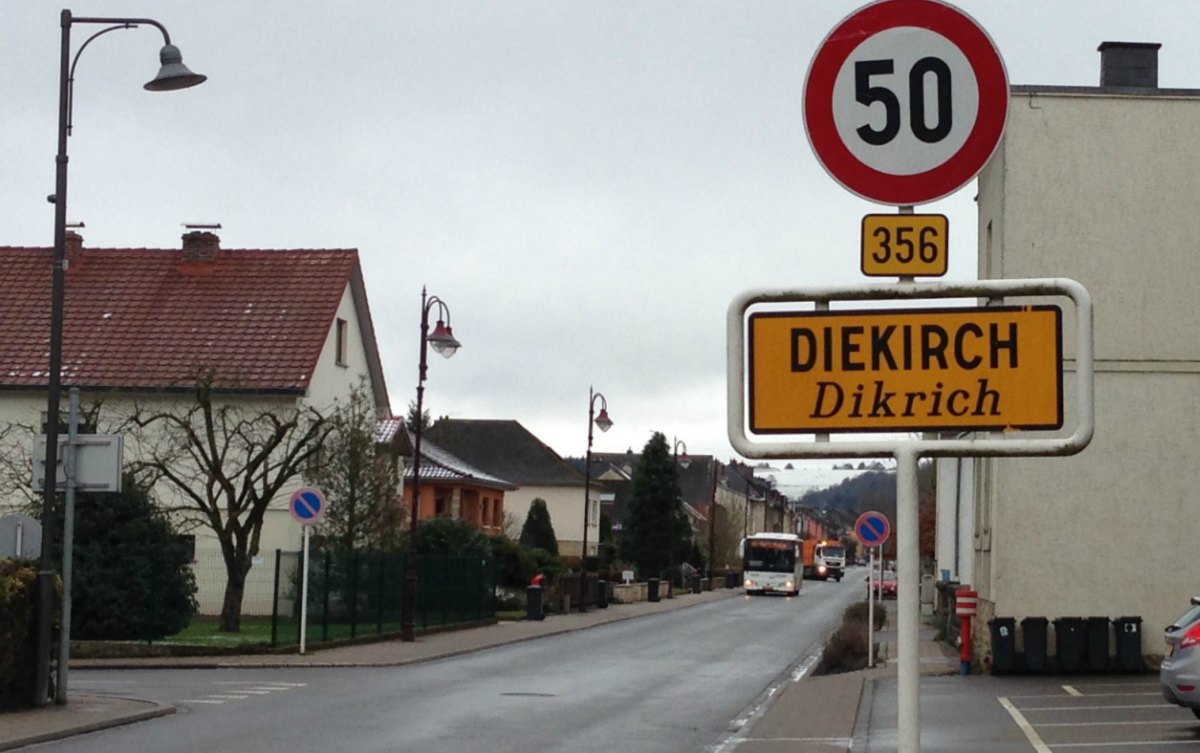 Week 2, King – January 8 is Elvis’ birthday. January 15 is the birthday of Martin Luther King, Jr. Do either of these “Kings” remind you of an ancestor? Or, taken another way, do you have a connection to royalty? Did you ancestor flee from an oppressive king?

Since I hadn’t planned on using the themes I was surprised that once again this one works for my chosen ancestral couple. Mr. and Mrs. MEDER-SCHWARTZ married, worked, and raised their children in Diekirch, a city in north-eastern Luxembourg. According to old sources the town received its name when Charlemagne, King of the Franks, converted the pagan Saxons to Christianity in the late 8th century. A church was built and the settlement was given the name “Diet-Kirch” (people’s church).

Jean-Pierre MEDER was born on 20 November 1888 in Diekirch, Luxembourg. He was the youngest of twelve children. His father Franz MEDER was 42 years old and his mother Elisabetha FABER was 43 years old at the time of his birth.

Jean-Pierre MEDER was seen on the census (Volkszählungen) of Luxembourg in 1890, 1895, and 1900 with his parents and unmarried siblings. These census listings will be discussed in the Week #5 post for his parents.

Luxembourg, Census Records, 1843-1900
The Luxembourg census which was taken approximately every three to five years for the years 1843 to 1900. The records include all household members, places, names, ages (sometimes a full birth date), professions, genders, and marital statuses. Sometimes they also show nationalities, religions, places of birth, family positions, and information on persons who normally lived in the household but were living outside of Luxembourg.

Catharina (also known as Catherine) SCHWARTZ was born on 2 February 1892 in Osweiler, a village belonging to the commune of Rosport, in the canton of Echternach in Luxembourg. She was the oldest of twelve children. Her father Johann SCHWARTZ was 26 years old and her mother Margaritha GORGES was 25 years old at the time of her birth.

Catherine, as her name was spelled on census, was with her parents, younger siblings, and her SCHWARTZ grandparents in 1895 and 1900.  These census listings will be discussed in the Week #6 post for her parents.

I have no idea how Catherine came to be living in Diekirch before her marriage. Echternach would have been a much closer town for her to work. Catherine, age 31, and Jean-Pierre, age 34, most likely met in Diekirch where they both lived and worked, Catherine as a midwife and Jean-Pierre as a brewery worker.

On the 7th and the 20th of May 1923 banns were read for their marriage which took place on the 15th of June 1923. The importance of the dates that the banns were read will be seen shortly.

Catherine and Jean-Pierre were presented with their personal Family Book. They signed their names in it as “J.P. Meder” and “Ketty Schwartz” and took the book with them the next day when they were married in a religious ceremony in the church. 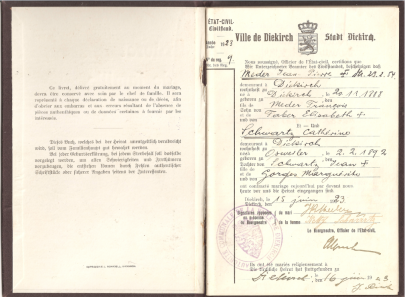 Ketty and Jean-Pierre were the parents of two boys, François Jean born 21 February 1924 and Marcel Mathias born 26 September 1926, as seen in their Family Book on the page following the marriage information (left).

As I mentioned last week, I had pointed out to my father-in-law that his brother, who was known to us as “Fritz,” was born 8 months following the marriage. He was born on 21 February 1924 which would mean that he was conceived between 27 May – 4 June 1923. Now for the part that would have interested my father-in-law. The marriage banns were read on the 7th and 20th of May so this was NOT a shotgun wedding arranged due to an unplanned pregnancy. Ketty, being a midwife, most likely knew how to prevent a pregnancy. I believe they truly desired to marry and as they were already 34 and 31 years old did not care to wait to start their family.


Jean-Pierre MEDER worked for the Diekirch Brewery (above ca. 1916). This drawing was found on The History of Industry of Luxembourg website. For persons researching their families in Luxembourg this is a wonderful resource. Historical timelines of the industries are included as well as many old photographs of places and products.

As is seen in their Family Book, Jean-Pierre MEDER died on 23 February 1954, two days after his oldest son Fritz turned 30. Fritz’s wife Anne was expecting her first child and Jean-Pierre was never called Bop or Bopa by grandchildren.

Since Catherine was also known as Ketty, I wonder if Jean-Pierre was nicknamed “Jemp” as many men in Luxembourg with this name have that nickname.

After her children were grown, Ketty was referred to by her son Marcel and his family as “Ged” a shortened form of Gedel or godmother in Luxembourgish. Ketty was the godmother of Marcel’s son. Below they are visiting the Château de Colpach located near Ell in western Luxembourg. The castle dates from the beginning of the 14th century when it was a stronghold.

Ketty lived another twenty years and was the grandmother of three grandchildren. In her later years she lived in the rest home in Vianden and died in Ettelbrück on 1 February 1974.

12 thoughts on “52 Ancestors: #2 The Brewery Worker and the Midwife”