Celebrating Black History Month – I did not want February to end without giving recognition to African-Americans in the United States. I hope that by sharing this information I may help someone open the door to their African-American brick wall.

If you missed the first installment, go here.

By March 1836 James Sims had disposed of all his real and personal estate including his slave property except for his Negro man Isaac who he intended to emancipate and set free. The steps he took were not as easy as one would think.

James had a deed drawn up detailing the conditions. Isaac had to pay James $150 in three instalments of $50 for his freedom. This sounds like a lot however he continues to note that if he (James) should die before all three instalments were paid Isaac would not have to pay the rest. Further if Isaac should die before him then James would use the monies received for Isaac’s children who were mentioned in this document as was their deceased mother Emily. 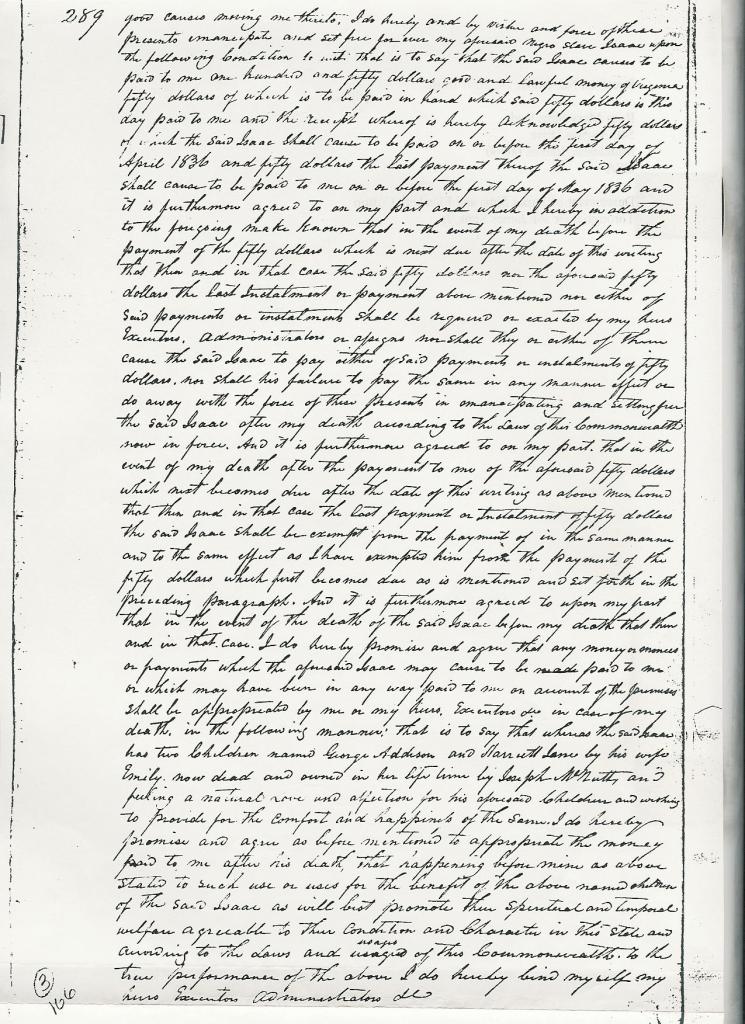 Know all men by these presents that I James Simms Sr. of the County
of Nicholas and State of Virginia having heretofore made my last
Will and Testament in which I have disposed of all my Estate real
and personal including my slave property except one slave ….
my Negro man Isaac which said Negro slave Isaac I heretofore
intended to emancipate and set free according to the laws of this
Commonwealth upon certain Conditions thereafter to be mentioned
and put to writing. Now this Instrument of writing Witnesseth
that in Consideration of the premises and for others ……
good causes moving me thereto. I do hereby and by virtue and force of these
presents emancipate and set free forever my aforesaid Negro slave Isaac upon
the following condition to wit that is to say that the said Isaac causes to be
paid to me one hundred and fifty dollars good and lawful money of Virginia
fifty dollars of which is to be paid in hand which said fifty dollars is this
day paid to me and the receipt whereof is hereby acknowledged fifty dollars
of which the said Isaac shall cause to be paid on or before the 1st day of
April 1836 and fifty dollars the last payment thereof the said Isaac
shall cause to be paid to me on or before the first day of May 1836 and
it is furthermore agreed to on my part and which I hereby in addition
to the foregoing make known that in the event of my death before the
payment of the fifty dollars which is next due after the date of this writing
that then and in that case the said fifty dollars nor the aforesaid fifty
dollars the last instalment or payment above mentioned nor either of
said payments or instalments shall be required or exacted by my heirs,
Executors, administrators or assigns nor shall they or either of them
cause the said Isaac to pay either of said payments or instalments of fifty
dollars nor shall his failure to pay the same in any manner affect or
do away with the force of these presents in emancipating and setting free
the said Isaac after my death according to the laws of this Commonwealth
now in force. And it is furthermore agreed to on my part that in the
event of my death after the payment to me of the aforesaid fifty dollars
which next becomes due after the date of this writing as above mentioned
that then and in that case the last payment or instalment of fifty dollars
the said Isaac shall be exempt from the payment of in the same manner
and to the same effect as I have exempted him from the payment of the
fifty dollars which first becomes due as is mentioned and set forth in the
preceding paragraph. And it is furthermore agreed upon my part
that in the event of the death of the said Isaac before my death that then
and in that case I do hereby promise and agree that any money or monies
or payments which the said Isaac may cause to be made paid to me
or which may have been in any way paid to me on account of the promises
shall be appropriated by me or my heirs Executors ? in cause of my
death, in the following manner: That is to say that whereas the said Isaac
has two children named George Addison and Harriett Jane by his wife
Emily now dead and owned in her life time by Joseph McNutt
and feeling a natural love and affection for his aforesaid children and wishing
to provide for the comfort and happiness of the same I do hereby
promise and agree as before mentioned to appropriate the money
paid to me after his death that happening before mine as above
stated to such use or uses for the benefit of the above named children
of the said Isaac as will best promote their spiritual and temporal
welfare agreeable to their condition and character in this state and
according to the Laws and usages of this Commonwealth. To the
true performance of the above I do hereby bind myself my
heirs Executors Administrators
as witness my hand and seal this 19th day of March 1836
James Sims
Witness
Joseph McNutt
John Huddleston
Bernard Hendrick

Below the “Information” sign at the Nicholas County Courthouse in Summersville, West Virginia, there is a framed letter written by James Sims freeing his slave named Isaac.

Know all men by these presents that I James Sims
of the County of Nicholas in consideration of a large
sum of money paid to me by my slave Isaac
as for the additional considerations of his fidelity
to me I have on this day manumitted and let
him the said Isaac free. To remain and continue
from hence forward to all intents and purposes
entirely free and discharged from servitude to
me my heirs and assigns forever. And for the purpose
of removing any difficulty as to the identity of the said
Isaac and to enable him to enjoy his Freedom in
the most absolute and perfect manner. I also hereby
certify and state that the said Isaac was born my
slave, that he has resided with me up to this date
that he is very black, his stature about five feet
five inches, of slender make and about forty three
years old, that he has had his right leg broken
just above his ankle. In testimony whereof I
have hereto set my hand and seal this 26th day of
September 1836.
James Sims
in the presence of
Andrew M. Dickinson
Joseph McNutt
John Huddleston
Edward Rion
Bernerd Hendrick
John Hill”

Nicholas County residents signed a petition to the Legislature of Virginia to grant permanent residence to Isaac Sims. The original can be found in the archives division of the Virginia State Library. It reads as follows:

A PETITION FROM NICHOLAS COUNTY, VIRGINIA
TO GRANT PERMANENT RESIDENCE TO ISAAC SIMS
1836

To the Legislature of Virginia

Your Petitioners humbly represent that JAMES SIMS
of the County of Nicholas has recently emancipated ISAAC
a blackman who is desirous of remaining in the Commonwealth,
your Petitioners represent that there are but very few
slaves in the County of Nicholas not exceeding sixty –
nor is there more than one other coloured person in the
County who is free — your Petitioners further state the
said black man ISAAC is an exceedingly honest industrious
and useful man addicted to no vicious habits whatsoever,
but peaceful & inoffensive & meek in all his intercourse
& business with the country — your Petitioners would be
truly gratified should this Legislature in its wisdom think
proper to grant his application — your Petitioners are
well convinced that no mischief can result to the country
by doing so and as a precedent in this part of the state
nothing of evil is to be apprehended.