This is a spin-off of my 52 Ancestors: #14 Albert Spencer LILLIE (1848-1913) ~ Old Photographs Saved From Trash Can blogpost in which I featured a few photos from a collection of old photographs my 4C1R Joe Rooney shared with me. I asked Joe about using the photos and he kindly wrote, “Please use them at your will.  I feel it is keeping it in the family and don’t need credit.  If anything, I appreciate your evaluations, identifications and detective work.  I’m hopeful you and yours enjoy them.  On a blog, in a book, above a cloud.”

How would you date this photograph? 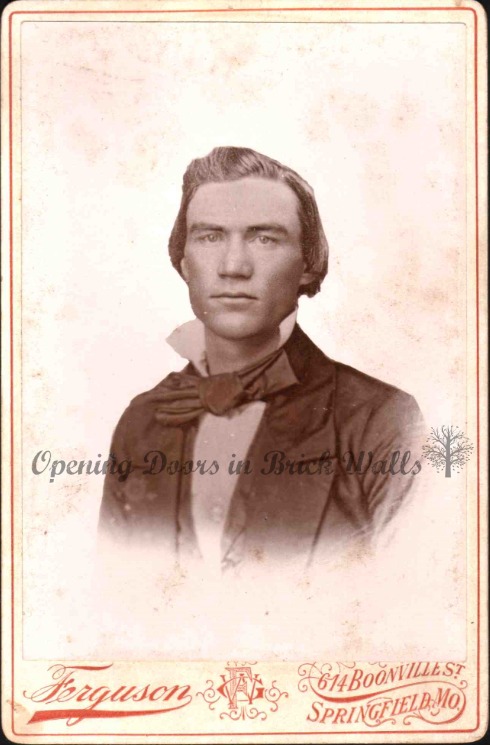 I’ve tried ignoring what I know about the person and concentrated on what he is wearing. Stand up collar with a wide gap on shirt, a neckcloth tied with what looks like a barrel knot, jacket with peaked lapels (as opposed to notched) without a buttonhole, and a vest with lapels. With his hair over the ears and no facial hair he looks to be in his 20s. Could this have been taken in the 1850s? Does the fashion fit the period?

This man has been identified as Samuel L. ROYALTY however the persons whose hands this photograph has passed through were unsure. Was this Samuel or his son Quincy?

There were several photos of Sam’s sons John Quincy ROYALTY and Charles W. ROYALTY in this collection but none of his oldest son Chester Ashley ROYALTEY. I’ve compared Quincy and Charles’ photos with this one and they are not the same men and the fashion trends are different. These will be shared in  later posts.

Samuel L. ROYALTY was the father of Florence ROYALTY and father-in-law of Isaac Spencer LILLIE. He was born in Kentucky in 1829. His mother was in Ohio County, Indiana, in 1850 with two of his married sisters. I have not located him in 1850. He married Joanna PALMER on 5 Apr 1856 in Ohio County, Indiana. They were in Randolph township when the 1860 census was enumerated. Samuel was in Rising Star, Indiana, at the time of the Civil War Draft Registration in 1863. Four of his children were born in Indiana. By 1866 he was living in Pope County, Illinois, where four more children were born. His wife died before 10 November 1874 when he married Johanna PADDOCK. He lived in Pope County until his death in 1902.

If this photograph was taken in the 1850s what was Samuel doing in Springfield, Missouri? Could this explain why he wasn’t found in the 1850 census?

I searched further for Samuel’s son Chester Ashley ROYALTEY (this son’s line changed the spelling of the name) for whom I don’t have any photographs. Imagine my surprise when I found him in Springfield, Greene County, Missouri, in 1900. Chester did a lot of moving around and lived in Illinois, Kansas, Missouri, and Oklahoma. Is it only a coincidence Samuel had his photograph taken in Springfield when he was young and his son Chester was there in 1900?

Joe Rooney kindly gave me permission to use these photographs on my blog.

Joe ROONEY wrote on 15 February 2015: This collection of photographs was scanned at 300 dpi color by me. The original photos were sent by Sandra Lillie about ten years ago after she found them cleaning out a relative’s garage in Southern Illinois, finding no other takers (suckers). She believes they were a collection by L Vance Lillie. Many of the pictures seemed to be removed from frames or were in albums evidenced by fading characteristics and may have been from other’s collections. I scanned the reverse if there was laboratory advertising or writing. Some of the authors’ identification may be figured out of the handwriting matches. I did not scan the reverse of photos where there was only a three digit number that I believe to be sequence numbers on a roll of film. I didn’t spot any obvious helpful commonalities.