October has been a busy month at Opening Doors in Brick Walls. A record breaking  total of 3,345 views and 1,651 visitors to the site during Family History Month. Total views since I began blogging in January 2014 went over the 40,000 mark this morning. It was a lot of work to put out 23 posts but it was worth it.

52 Ancestors in 52 Weeks – 2015 Edition went into the last quarter at the beginning of the month. Now three-quarters of the stories have been written and, at the same time, I’ve cleaned up my database and added sources and images for each person I wrote about.

I added a new page with a list of my children’s ancestors. I’ve written about their ancestors for the 52 Ancestors Challenge in 2014 and 2015 from generation 3, their grandparents, to generation 7 which will be COMPLETE at the end of the year. What a wonderful feeling it is to have done all of these posts in only two years.

Blogger_lu Featured My Blog During October

During the entire month Blogger_lu featured my posts on their Facebook page as part of their “Society & History” month. On Saturday the 10th my blog was introduced on the Blogger_lu Facebook page:

Opening Doors in Brick Walls is Cathy Meder-Dempsey’s digital stepping stone to share and preserve her family history research. Cathy has been blogging since January 2014, sharing weekly posts on American and European ancestors, telling the stories using documentation and photos, with the focus this year being on her families in Luxembourg. As a member of Luxracines, she has written several blogposts about the genealogy excursions taken with the club. She is especially proud of her three part blogpost on an ancestor’s slaves as it prompted the creation of the Slave Name Roll Project which has been well received by descendants of slaves and allows descendants of slave owners to share without shame or judgment the documents they find with names of slaves. With her new weekly series, Old Photographs Saved From Trash Can, she is learning about early photography and looking forward to connecting with descendants of the persons featured.

For Family History Month I chose to do more than my once a month post of the slave names for the Slave Name Roll Project. In 7 posts I shared the names of 54 slaves, a will, 7 bills of sale, and a conclusion which I hadn’t dared come to until I had read the entire 127 images of the Chancery case in which the documents were found.

Early in the month I helped my genealogy society move a library from Germany to Luxembourg and worked at the Luxracines stand during the JNGH 2015.

In the past month I finally got into a rhythm of posting the Old Photographs at a weekly rate. My cousin Joe Rooney sent me the entire collection and I wrote a post when I unpacked the package that came in the mail.

I love seeing “How To” posts on other people’s blogs. I’ve been using RootsWeb WorldConnect for 15 years and tried my pen at writing a How to Upload and How to Manage your family tree on the site.

I joined Twitter and was interviewed by Wendy Mathias for GeneaBloggers’ “May I Introduce to You.”

Going full speed during October, I still had time for a just for fun post on Halloween.

I’ll be going back to regular speed until the end of the year. 52 Ancestors and Old Photographs will be coming weekly as well as a new series. Jeanne Bryan Insalaco of Everyone Has a Story suggested writing daily or weekly posts on family heirlooms and I’ve taken up her challenge to write once a week. First post will be on Tuesday.

I received Amy Johnson Crow’s 31 Days to Better Genealogy emails during the month and saved them to work through in January. I want to be able to give each day my full attention. To sign up for the daily emails please check out Amy’s post – they’re FREE! 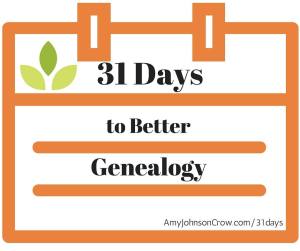 Was October and Family History Month as busy for you as it was for me? I’d love to hear about it!

8 thoughts on “A Résumé of Family History Month”