After I graduated from high school in 1976 I went to live with my paternal grandmother, Myrtle Hazel ROOP, widow of Fred Rothwell DEMPSEY, while attending West Virginia Tech. Grandma gave me several items including a cardinal feeding her young ones and this glass relish dish shaped like a leaf and a bunch of grapes.

It belonged to Grandma’s mother-in-law Laura Belle INGRAM, my great-grandmother and wife of William Henderson DEMPSEY. It’s special to me because of who gave it to me and who it originally belonged to.

I use it for my homemade Santa Fe Cranberry Sauce I serve at Christmas with Yeast Rolls from Better Homes & Gardens New Cook Book ©1976 and the Traditional Stuffed Turkey with Gravy, Chicago Mashed Potatoes with Onion & Bacon, and Louisiana Maquechoux or Sautéed Yankee Brussels Sprouts. Recipes are from “An All-American Thanksgiving Sampler” found in the November 1996 issue of the Good Housekeeping magazine.

After I took these photos of the dish I searched the internet for grape bunch shaped glass dish. I was surprised to find photos of exactly the same dish. On Ebay sellers describe it as a relish, nut, fruit, or candy dish. There is no mark on the dish which would identify the glass-maker and some sellers attribute the dish to Anchor Hocking. It may have been sold as a set of five with four small and one larger dish. 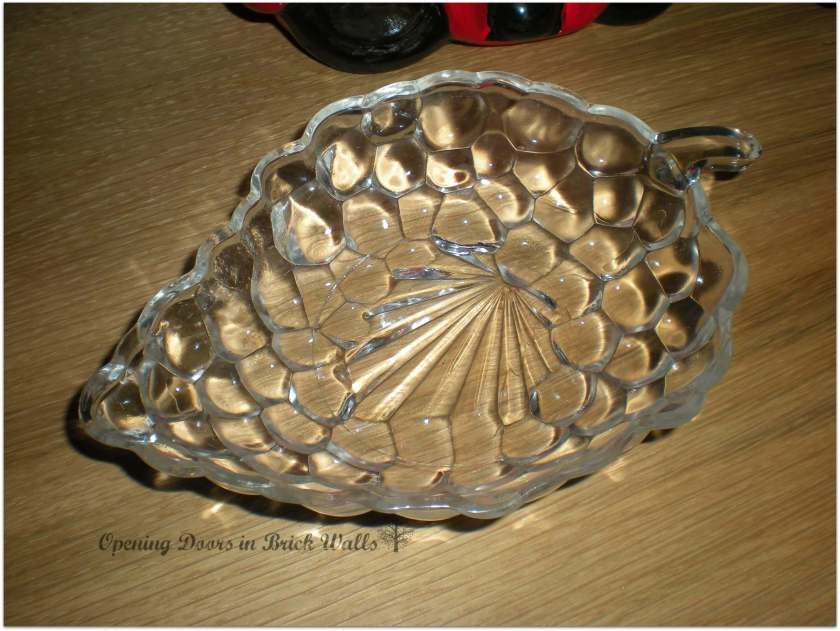 Since it belonged to my great-grandmother Laura she must have bought or received it before her death in 1940. Is this Depression glass – machine-pressed glassware, mass-produced in the US from the late 1920s to the 1940s and often used as giveaways to persuade customers to purchase goods?

It may have been a giveaway at the time but to me it is priceless.