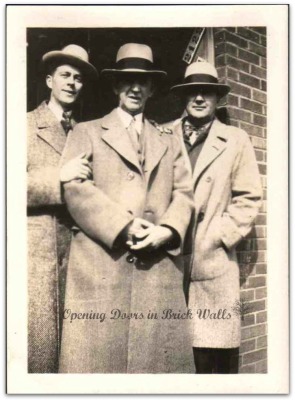 After I posted #45 (Three LILLIE Men) and #46 (Mother and Son) my cousin Joe Rooney, son of Ike and Florence’s daughter Ruby Pernecia LILLIE (1909-1981), sent an email correcting the labeling of these pictures.

They were not part of the original collection of old photographs which were saved from the trash can. They were photographs Joe had in his possession and which were used to help identify persons in the collection. When Joe saw my posts he realized the identification for photo #46 had to be a mistake. He consulted the original and wrote in his email:

I mis-identified or mis-labeled one as Reese Lillie and Florence his Mom.  But on the back, I now see somebody had identified them as Grandpa and Grandma Lillie 1930.  Isaac and Florence.  I regret the mistake.

Due to the fact that Isaac Spencer “Ike” LILLIE (1872-1932), husband of Florence, was not found in 1910 and 1920 census Joe had believed Ike died in 1918. We have since found his 1932 death record but he is still missing from the census. For whatever reason Ike did not live with his wife and children in Detroit but visited them as we can see by the photographs.

This photograph of Ike and his wife Florence was taken in 1930. For comparison I am including the photographs taken in 1920 at the time of the family reunion.

These were featured in Old Photographs Saved From Trash Can ~ #10 LILLIE Family 1920 Reunion. In the above, we see Ike and Florence at the very back, and in the picture below, Ike is #1.

I believe he was Ike’s brother George Wyte LILLIE (1874-1943). The hat he is wearing hides part of his face but he resembles the second man from the right (#9) in the photo above as well as the younger George featured in Old Photographs from Trash Can #6.

A lesson learned: Seeing your work in a different light or showing it to others may make an error pop-out. No matter how many times you go over your research or writing you will pass over mistakes. In this case my cousin Joe noticed the error after the photos were posted and brought it to my attention. He did what we should all do when we find error, bring it to the person’s attention as gently as possible. Think about how you would want to feel when being corrected.