Florence and Fannie appear to have had a special relationship. Florence saved many photographs of Fannie from the time she was a little girl until she was married and had little ones of her own.

While sorting through the digital copies of the collection, I’ve been moving the used images into a new folder so that I have a better overview of all unused photos. Originally there were more than 25o images in the folder. I am now down to a little less than two dozen.

In the unused file, I found this picture of Frances which has not been shared. The digital copies of the front and back of the photograph were originally labeled WielFrances and WielFrancesback. 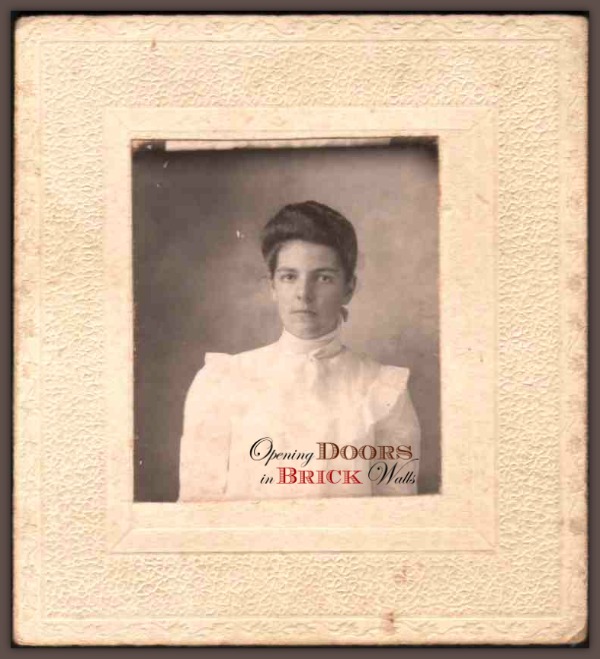 The young woman in this picture was photographed from the waist up. Fannie has her hair up and is wearing a blouse with skirt combination or an afternoon dress. Her blouse is high collared with a bow tied in the middle front. The rounded chest inset has a ruffle from shoulder to shoulder. The sleeves are a bit wide at the shoulder level. Were they more tight fitting below the elbow? When she married about 1915 she was no longer wearing her hair up and her face was fuller (see collage). I believe this picture may have been taken about 1910 when she was 18 or perhaps a bit earlier.

The writing on the back was misinterpreted when the digital copies were labeled. At the time, connections between all of the people in this collection were not known and names were not familiar.

Written on the back of the photo in pen is Frances Well Ross sent to. Written in pencil in a more childish handwriting, maybe by young Fannie, Aunt Florence. Since Wells is missing the s at the end and Ross was Fannie’s married name, I believe the ballpoint pen writing was added later so that anyone viewing it would not think this was “Aunt Florence.”