Why did Florence ROYALTY save this photograph of a big white bird?

A Trumpeter swan or a Tundra swan? There are two species of swans in North America with black bills. Since there is no color in the photo one cannot see if this is a trumpeter with a red border on the lower mandible or a tundra with yellow marking on the lore. But then a tundra swan can also have the red marking and some tundra swans don’t have the yellow teardrop spot near the eye. A tundra’s eye is usually distinct from the bill while a trumpeter’s eye is not but the quality of the photo makes it hard to tell. Trumpeters have longer necks in proportion to their bodies than tundras. Distinguishing the trumpeter from the tundra is not easy even when the two are swimming or standing and they can be compared. These characteristics can be used in the field to identify one or the other but from this photograph, it would be a “wild” guess.

“In the 19th and early 20th centuries, the trumpeter swan was hunted heavily, for game or meat, for the soft swanskins used in powder puffs, and for their quills and feathers.” [Source: Wikipedia, https://en.wikipedia.org/wiki/Trumpeter_swan]. Extinction of the trumpeter seemed imminent by 1933 when fewer than 70 were known to exist. In the 1950s several thousand trumpeters were discovered in Alaska. The population has been restored to over 46,000 birds in 2010. 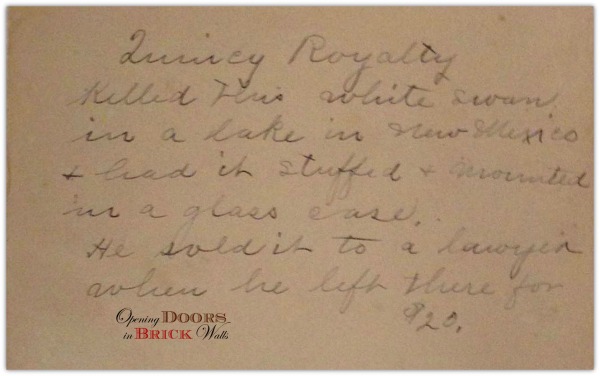 Quincy ROYALTY
killed this white swan
in a lake in New Mexico
& had it stuffed & mounted
in a glass case.
He sold it to a lawyer
when he left there for $20.

John Quincy ROYALTY (1866-1918), Florence’s brother, was the man who killed the swan. Quincy was in New Mexico from before 1898 until 1903, during the time that the swan was heavily hunted. In 1898 while in Albuquerque, New Mexico, he enlisted in Company E, First Territorial U.S. Volunteer Infantry, and served during the Spanish War until mustered out at Albany, Georgia, in 1899. After a visit to his old home in Pope County, Illinois, he returned to the West. In 1900 he was once again in Albuquerque, living in the household of his brother-in-law John R. BOSWELL and his youngest sister Olive ROYALTY, and working as a watchman for the railroad. By 1903 he had moved to California. This would have been when he sold the stuffed swan for $20.

But there is still one inconsistency. If Quincy killed the swan in New Mexico and sold it to a lawyer before he left there, then when and where did Mr. Cumings of Golconda, Illinois, photograph the swan?