After graduating from Nuttall High School, Warren was an employee of Ford, Bacon, and Davis in Dunbar. On 7 March 1942, he married Pauline Alice RAMSEY, daughter of Jarrett Theodore RAMSEY and Louie Ann CAVENDISH, in Russell, Greenup County, Kentucky.

On 29 December 1942 he entered the U.S. Army and received his training at Camp Hood, Texas; Camp Carson, Colorado; Camp Gruber, Oklahoma; Camp Livingston, Louisiana; and had desert training in California.

Three weeks after he entered the U.S. Army his wife Pauline gave birth to a baby girl.

Sgt. ZICKAFOOSE was attached to Company C of the 811th Tank Destroyer Battalion and was sent to Europe in August 1944 arriving at Cherbourg, France, on 15 September 1944.

The battalion moved to Luxembourg in November and participated in the Battle of the Bulge in December. Sgt. ZICKAFOOSE received the Purple Heart Medal for wounds received in action in December 1944.

Into January 1945 the 811th was widely scattered as it was attached to many divisions. In February and March, they supported operations against the Siegfriedstellung (Siegfried Line).

Every day of World War II, a 3 1/4 by 7-inch Morning Report was issued. These are the events recorded for the first few days of April 1945. 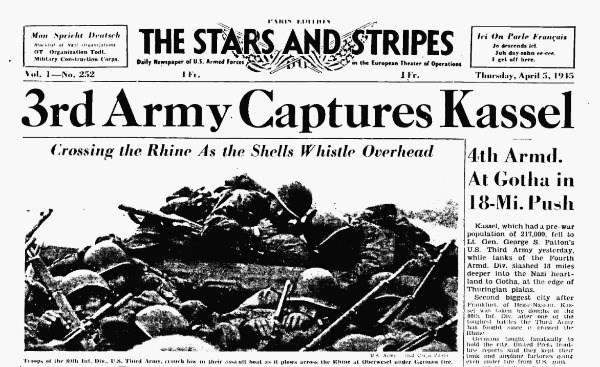 Mrs. Pauline ZICKAFOOSE was informed by the war department of the death of her husband, Sgt. ZICKAFOOSE in May 1945. She remarried two years later.

Sgt. ZICKAFOOSE’s body was returned to American soil in 1948. He was buried in End of the Trail Cemetery in Clintonville on Sunday, 19 December 1948. The service was held by Rev. M. J. Painter and Rev. John Bragg. Military rites were conducted by the Ansted American Legion Post at the grave.

His father applied for a military marker in a month later, on 18 January 1949. 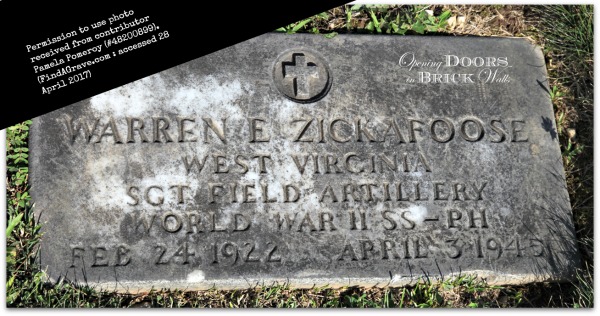 The President of the United States of America, authorized by Act of Congress July 9, 1918, takes pride in presenting the Silver Star (Posthumously) to Sergeant Warren E. Zickafoose (ASN: 35645379), United States Army, for gallantry in action while serving with the 811th Tank Destroyer Battalion, 80th Infantry Division in connection with military operations against an enemy of the United States on 4 April 1945 in Germany. On that date, while supporting infantry troops in holding Vollmarshausen, Germany, Sergeant Zickafoose, a gun commander of a tank destroyer, observed four enemy tanks approaching the town. Realizing that he was outnumbered he nevertheless elected to move into a firing position to prevent the enemy from overrunning the infantry. By taking up an advantageous position he repelled the attack, although his destroyer received a direct hit which mortally wounded him. The courage, aggressive leadership, and supreme devotion to duty as displayed by Sergeant Zickafoose was in keeping with the highest traditions of military service and reflects great credit upon himself, his unit, and the United States Army.