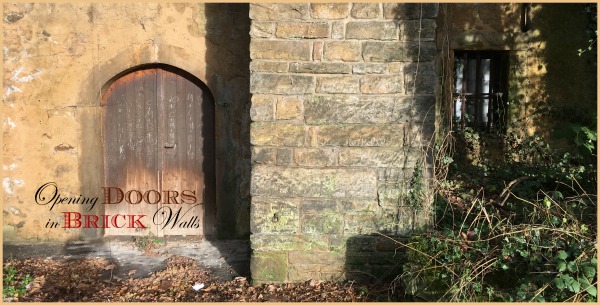 My second great-grandmother Marie MAJERUS (1850-1931) is like a knothole in a fence. She was the only child of her parents Jean MAJERUS (1817-1887) and Maria TRAUSCH (1820-1875). On one side of the fence, she was the mother of ten children, eight of whom married and continued the line. On the other side of the fence, are her parents, grandparents, and other ancestors. Marie is a mitochondrial ancestress whose direct line goes back to my 6th great-grandmother Anna Catharina RONAS (b. abt. 1710).

When I re-visited my research this week for Marie’s paternal grandparents, Jean Baptiste MAJERUS (1797-1868) and  Catharina CORNELY (1794-1871), I realized how much information was hidden behind the fence. She had many aunts and uncles and cousins.

Nearly all of my maternal fourth great-grandparents were born in the 1760s or 1770s. Jean Baptiste and Catharina were much younger being born in the 1790s.  In turn, their children were born after civil records became required in Luxembourg. They lived long lives and were found on eleven censuses taken between 1843 and 1867.

Jean Baptiste, son of Jean MAJERUS and Margretha BREGER, was born on 9 Germinal in the year V or 29 March 1797 in the Faubourg de Grund, a suburb located on the banks of the Alzette River in the valley below the center of Luxembourg City. In Luxembourgish, it is known as Gronn.

At the time of his birth, his parents were a legally married couple. The informants who accompanied the father to report the birth were Jean Baptiste BRETER, age 64 years, and Michel BRETER’s wife Anne Catherine GRASBERGER, age 36 years.

A marriage record for the couple has not yet been located. I suspect Jean Baptiste was their first child and the informants who accompanied the father were the child’s maternal grandfather and maternal uncle’s wife.

Catharina, daughter of Hubert CORNELY  and Margaretha EVEN, was born on 24 April 1794 in Wickrange in the commune of Reckange-sur-Mess. She was baptized on 25 June 1794 in Reckange-sur-Mess. It is unusual, for this time period, for a baptism to take place two months after the birth. Normally the rite was performed the same or following day. Other baptismal entries on the same page of the register show delays. The priest may have had more than one parish under his jurisdiction and did not travel on a daily or weekly basis.

Catharina was the second youngest of nine known children. Her parents were married in 1779. When their first child was born on 17 June 1780 they chose a maternal uncle by marriage to be the godfather. Joannes ERPELDING of Kackerterhof, the husband of Catherine EVEN. 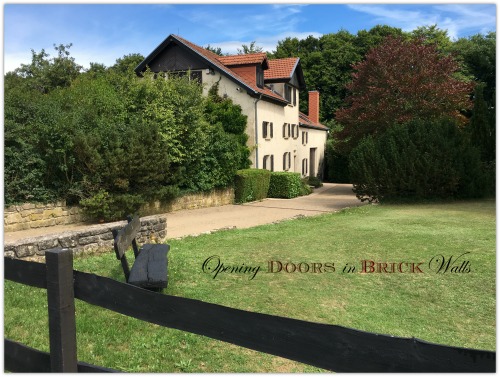 Kackerterhof was the ancestral home of my husband’s 5th great-grandparents Caspar ERPELDING (d. 1779) and Gertrudes JEHNEN (1724-1774). Joannes, the godfather mentioned above, was an older brother of my husband’s 4th great-grandfather Nicolas ERPELDING. When I worked on the ERPELDING line I wondered if the EVEN lady who married into the family could be related to my Margaretha EVEN. The marriage records of both EVEN ladies show their parents were Léonard EVEN and Marie IRY, my 6th great-grandparents.

Hubert CORNELY died on 29 August 1816 in Wickrange. Of his nine children, only his oldest son Jean and his two youngest daughters Catharina and Catherine have been researched. It is not known, at this time, if the six children born between 1782 and 1793 survived, married, or had lines which continue.

My fourth great-grandparents, Catharina, 22 years old, and Jean Baptiste, 20 years old, were married on Friday, 25 April 1817. The bride and groom could not write but the father of the groom, Jean MAJERUS signed his name to the marriage record. The record officialized just in the nick of time as a month later their first child Jean, my third great-grandfather, was born on 24 May 1817 in Strassen.

The newlywed father Jean Baptiste complicated things a bit when he reported the birth of his first son. He may have been a bit nervous when he went to the city hall at four in the afternoon. The mother of the child on the birth record was seen as Maria CORNELY instead of Catharina – was it the father’s nervousness or an error made by the clerk? Jean Baptiste and Catharina’s son Jean was born at 11 o’clock in the morning. His father could not read and write and did not sign the record which was witnessed by two other persons who were present.

These were the children born to Catharina and Jean Baptiste:

The maternal grandmother of the children, Margaretha EVEN died on 14 September 1839 in Wickrange before the youngest grandchild was born. Her death was reported by her oldest son who lived in the village. Her youngest daughter Catherine had married in 1824 and was raising a small family in Bertrange. Sadly, six of Catherine’s known eight children died infancy, unlike Catharina’s children who were strong and lived to adulthood. All except for one daughter who died at the age of two months.

A little over a half a dozen years later Catharina and Jean Baptiste’s nine sons and a daughter began to marry.

Jean Baptiste’s parents died before the rest of the children married. His mother Margretha BREGER died on 1 April 1851 and his father Jean MAJERUS died on 5 July 1852, both in Strassen where they had lived since 1802. This census listing for 1847 shows they had been living in the commune for 45 years.

This census record, as well as the preceding and following ones, give Jean MAJERUS’s place of birth as France while the last he was seen on indicates he was born in Larochette (Felz). This same place was seen on his death record. Was he born in Boulay-Moselle in France (the only place I could find which sounded like Boulé seen on the 1846 and 1849 census) or in Larochette? Will this lead to his parents?

The children continued to marry:

In 1865 Michel, the youngest of the children went to America. All of his living siblings [except perhaps Nicolas who has not been traced after the 1855 census] were now married and raising families. Birth records for 40 grandchildren of Jean Baptiste and Catharina were found – all except for one, my Maria MAJERUS, were born in Strassen. During some years there were between three to five MAJERUS grandchildren born within months of each other.

Due to the amount of time it took to look up, download, and correctly cite the birth records,  I have not even begun to look for the death records of the spouses and children of the MAJERUS children of Jean Baptiste and Catharina. [Note: RootsWeb WorldConnect where I keep my GEDCOM is supposed to be back online within the next few weeks.]

Jean Baptiste MAJERUS died on 7 July 1868 in Strassen at the age of 71 years. His two youngest sons Peter and Jean Pierre were the informants on his death record.

Michel, the youngest of the bunch who had gone to America in 1865, married Mary MAUS about 1870 in Minnesota. Did he write to his mother, letting her know he was doing well, married, and living in St. Cloud, Stearns County, Minnesota?

Catharina CORNELY was 77 years old when she died on 10 June 1871 in Strassen. Her oldest and youngest sons who lived in Strassen, Jean and Jean Pierre were the informants for her death.

All of Jean Baptiste and Catharina’s children who married had children except for their youngest son Michel. He and his wife raised two of her MAUS nieces. Michel died in 1906 and his widow Mary died in 1923. She was a very religious woman who left bequeaths in her will for masses to be read for the soul of her husband, herself, and other poor souls. She also left bequeaths to a Catholic church, for an orphanage to be built ($5000), to a nephew who was studying for the priesthood, to the children of several of her deceased siblings as well as two godchildren. To her niece Mary A. MAJERUS (a MAUS niece she raised who took the MAJERUS name) she left $10,000, all real estate, and the residue and remainder of all property. Mary A. MAJERUS never married and died in 1960.

Until next week, when I will be writing about the last set of 4th great-grandparents, Michel TRAUSCH and Catharina HAMES of Mamer.