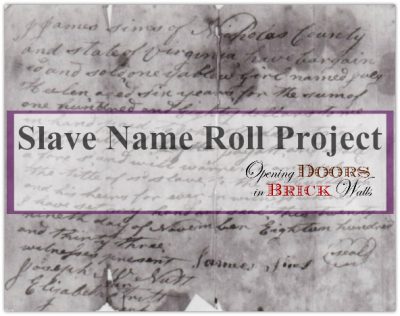 Releasing the name of a man named Davie.

In 1837 John Sparr wrote his Last Will and Testament leaving his “Black man Davie” to his wife Mary. After the death of the wife of John Sparr, Davie was to have the liberty of choosing “his master”. 1 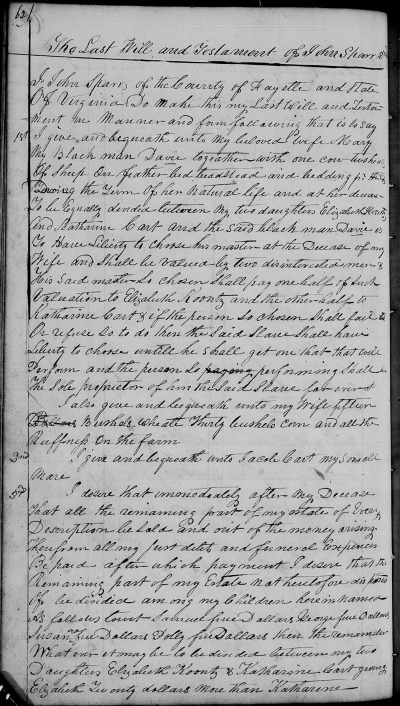 The Last Will and Testament of John Sparr Dcd
I John Sparr of the County of Fayette and State of Virginia Do make this my Last Will and Testament in Manner and form following that is to say
1st I give and bequeath unto my beloved wife Mary my Black Man Davie Togeather with one cow two head of sheep our feather bed bedstead and bedding p. & and During the Term of her natural life and at her decease To be Equally divided between my two daughters Elizabeth Koontz and Katharine Cart and the said black man Davie is to have liberty to choose his master at the Decease of my Wife and shall be valued by two disinterested men & His said master so chosen shall pay one half of such valuation to Elizabeth Koontz and the other half to Katharine Cart & if the person so chosen shall fail or refuse so t odo then the said Slave shall have liverty to choose untill he shall get one that that (sic) will Perform and the person so performing shall be the sole prorpietor of him the said Slave forever.
I also give and bequeath unto my wife fifteen Bushels Wheate Thirty bushels corn and all the Ruffness on the farm.
2nd I give and bequeath on Jacob Cart my son’s old mare.
3rd I desire that immediately after my Decease that all the remaining part of my estate of Every Description be sold and out of the money arising Thereform all my just debts and funeral expenses be paid after which payment I desire that the Remaining part of my Estate not theretofore disposed of be fivided among my children herein named As follows tow wit Samuel five Dollars George five Dollars Susan five Dollars Polly five Dollars then the remainder Whatever it maybe to be divided between my two Daughters Elizabeth Koontz & Katharine Cart giving Elizabeth Twenty dollars more than Katharine

And Lastly I do hereby Constitute and appoint my two sons in law Jacob Koontz and Jacob Cart Executors of This my Last will and Testament hereby revoking all Others or former Wills or Testaments by me heretofore made In Witness Witness whereof I have hereunto set my hand and seal this 24th day of November 1836.
John Sparr (his mark) Seal

Fayette County Court January Term 1837
The Last Will and Testament of John Sparr Deceased was presented in open court proven by the oaths of William Carnafix & Henry Crist the subscribing witnesses thereto and is ordered to be recorded.
Test
H Hill CFC (Clerk Fayette County)

In 1830 John Sparr and his son George were in Nicholas County. Fayette County would be formed in 1831. John Sparr and his wife were in their seventies and did not have a slave listed on the 1830 census. In 1840 Samuel Sparr, likely the son mentioned in the will, was found in Fayette County and had one male slave aged 55 to 99 years in his household. The sons-in-law, Jacob Koontz and Jacob Carte, did not have any slaves in 1840. None of the surnames seen here were found on the 1850 and 1860 slave schedules.

Following my three part series on the slaves of my 5th great grandfather James Sims during Black History Month in February 2015 I made a commitment to write a post on a monthly basis until I’ve RELEASED all of the names of slaves owned by my ancestors or owned by persons I’ve researched who were relatives or neighbors of my ancestors.