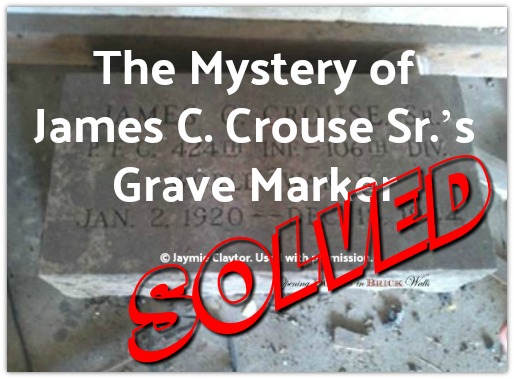 Nearly four years ago Ellen Claytor found James C. CROUSE Sr. (1920-1944) in my online GEDCOM at RootsWeb WorldConnect. Her son had bought a house and found a flat marble marker for James in his garage. Why was the marker in her son’s garage and what could they do to get it back where it belonged?

I wrote my first post on The Mystery of James C. Crouse Sr.’s Grave Marker on 4 May 2014 followed by Part 2 only a few days later.

The first post included a biography of James C. CROUSE Sr. who began his military service at Camp Blanding in Florida and then went to Europe where he served in England, France, Belgium, and Germany. He died serving his country. Four years later his body was returned to West Virginia and buried in Huse Memorial Cemetery in Fayetteville. His father S. J. Crouse applied for a flat marble marker for the unmarked grave.

I found James’ granddaughter Marian Crouse Walraven on Facebook. She was shocked to learn her grandfather’s marker had been found in someone’s garage as she knew there was a marker on his grave.

Was the original marker delivered to the wrong cemetery? Was the family contacted? Did they request a new marker when the one they applied for didn’t show up at the cemetery of burial? Was the home the marker was found in previously owned by a member of the Crouse family?

The 424th Combat Infantry Regiment of the 106th Infantry Division landed in France on 5 December 1944. They crossed into Belgium on 10 December 1944 and were stationed at Winterspelt (Germany). On 16 December 1944, the German Army unleashed its Ardennes Counteroffensive (The Battle of the Bulge). After Action Reports show that the 424th was in Belgium on 18 December 1944. KIA or DOW, whichever is correct, one could place him in Belgium and the other in Germany. His military records may shed light on this question.

The follow-up a few days later was expected as I had a few people checking things out for me. Anita McClung and Sandra Humphries Raedel, research buddies and members of the Facebook group Fayette County West Virginia Genealogy, were the first to help confirm the burial location. Fayetteville Huse Memorial Park and Mausoleum has a Facebook page and at the time did photo requests of markers.

I sent a private message to the admin of the page requesting a photo of the marker of James CROUSE Sr., block 1, lot 38, grave 4 (the Notes section of their page had a list of burials with location). A few days later I received a message from Sonya of the Huse FB page, “I have placed the picture of the marker along with monument and other markers associated with your request under ‘Various pics requested’. Hope it helps.“

Sonya told me, “Most of the time when a family changes a marker, then they will take the original marker home. Very few say throw it away.”

After seeing both markers we speculated the marker found in the garage was most likely the one which had been on the grave of James C. CROUSE Sr. from 1949 until the burial of his son in 1997. But the question remained – how did the marker end up in the garage?

On February 8, 2018, I received a message on my Facebook page Opening Doors in Brick Walls from Bill Wise of Oak Hill, West Virginia. He wanted me to give him a call in regards to the marker of James CROUSE. Due to the time difference and my making our traditional Berliner and Verwurelter that day, Bill got back to me with a longer message instead of waiting for me to call.

Long story short. James Crouse [Jr., the son of James CROUSE Sr.] was married to my aunt Eugenia. Her sister Vickie Jane Wise/Wade is my mother. The garage that the marker was found in was their parents’ house. William Ralph and Lucy Lee Wise. The house was left of my mother upon their death. And upon my parents’ deaths…Vicki and Larry Wade…the house was left to me and I sold very soon after that. Believe it was 2013.

When my cousin Jim passed away in 1997 he wanted to be buried with his father James. There was a new stone with both of their names on it put in place of the original. My dad worked for the town of Fayetteville which dug the graves and maintained the cemetery. He brought the stone home. Where it sat in the garage all this time. When I sold the property I had to get out fairly quickly. To be honest with you I had not thought about that stone until I was researching my uncle last night and saw your story. In my haste to get out, I probably left more than just that on the property. So not really what you would call a mystery but it was an interesting read.

Marian, the granddaughter of James Crouse Sr., is Bill’s 1C1R and he wanted to know if he and I were also related. Marian and I are 6C1R – and that five times. Bill is not related to me through any of Marian’s and my common ancestors. I did a quick check of his Wise line and we do not appear to be related.

I’m glad Bill found my blog while researching his uncle James CROUSE. Even more, I am so excited he took the time to get in touch with me and tell me the story of why the marker was found in the garage of the new homeowner. I contacted both Marian and Jaymie to let them know the new development and they read the draft of this post before it was published.

James CROUSE’s body was returned to US soil four years after he was killed. It also took four years to learn why the marker from his grave was stored in a garage. Case SOLVED. Isn’t blogging the best?