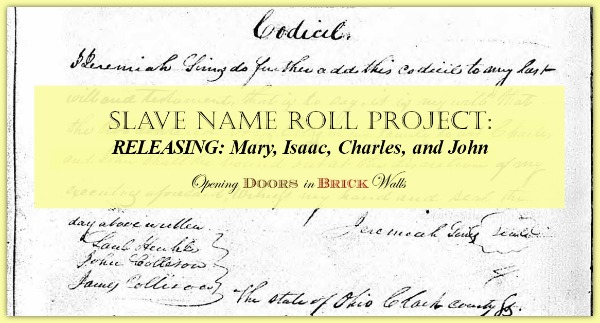 I’m rewriting the biography of my ancestor James Sims. The first set of documents being perused are the census. As I study the pre-1850 census listings of my 5th great-grandfather and his children, I’m paying close attention to ALL persons in the households including enslaved persons.

James Sims was known to have had slaves. They were featured in my three-part series on the slaves of James Sims during Black History Month in February 2015. Today on the anniversary of these posts, I would like to feature four more enslaved persons found in a Sims household.

James’ oldest son Jeremiah Sims had three colored persons in his household in Clark County, Ohio, in 1820.1 The headings of the columns are nearly impossible to read and do not match up with the census extraction form for 1820.2 There are too few columns for Slaves and Free Colored Persons. On the page with Jeremiah’s entry, there are two columns with the numbers 2 and 1 – separated by a double line. Could this be to distinguish the number of slaves from free colored persons? Or male from female? The ages and gender of these persons cannot be obtained from the sheet due to the lack of columns. Who are these people?

The answer may lie in the history of Ohio. Slavery was abolished in Ohio by the state’s original constitution when it was formed in 1803. Jeremiah did not settle in Ohio until about 1804. The 1810 census for Ohio with the exception of the county of Washington is lost. This means no record of Jeremiah having slaves in 1810. Who could these people be and were they free or enslaved?

Jeremiah was married to Sarah Milhollin, daughter of Thomas Milhollin and Jane McClintic, on 26 November 1800.3 Her mother Jane died about 1801 and her father was living at the time Jeremiah and Sarah went to Ohio around 1804. When did Thomas Milhollin die? Did he own slaves? Did he leave a will?

The Will and Codicil

Codicil to the will: two tracts being purchased from John Bollar are also to be sold. Dated 8 November 1818 and witnessed by Charles and Rachel Cameron.

The Sale of the Estate

The sale of the estate was on 8 December 1818.6 Three pages of items with the names of the buyers and the price they paid. The enslaved persons were not sold.

Thomas Milhollin made the following bequest in his last will and testament concerning the slaves found in his inventory.

As it is my desire that my slaves to wit. Kate and her three children Isaac, Charles, and John, should not be retained in Slavery after my decease I will and direct that my daughter Mary and my son Thomas out of the legacies left them do furnish my said slaves Kate and her three children with two suits of strong new cloths and with money necessary for conveying them to the state of Ohio and that my said son Thomas carry them there and deliver them to my son-in-law Jeremiah Sims and that said Jeremiah Sims bind the said Isaac, Charles, and John to learn some trade agreeable to the Laws of that commonwealth until they severally arrive to the age of twenty one years, at which time it is my will that they be free and that the said Jeremiah Sims have and enjoy the services of the said Kate until her residence there under the laws of that state and my will now intitle her to her freedom and also should it be necessary upon the introduction of my said slaves into the State of Ohio to pay any tax to the commonwealth it is my will that the said Jeremiah Sims pay the same out of the legacies left by me to his wife Sarah.

The three children were to be bound to Jeremiah Sims to learn a trade until the age of 21, then freed. Kate was to work for Jeremiah Sims until freed under the laws of Ohio.

On the 1820 census, three persons of color were in the Sims household in Germantown in Clark County, Ohio. Were they the three sons of Kate? Two sons and Kate? Was Kate living in a different household? Had Isaac already reached the age of 21 and freed?

By 1830 Jeremiah was deceased and his widow Sarah had her own household with 2 sons and a daughter. Next door was her son William. Her oldest son Thomas who had married in 1822 has not been located in 1830. Sarah and William did not have slaves or free colored persons in their household.

Is it possible Jeremiah Sims, who died in 1824, left a will including bequests concerning the young men bound to him?

The Last Will and Testament of Jeremiah Sims

On 8 January 1824, Jeremiah Sims wrote his last will and testament.7 No mention was made of slaves. There was, however, a codicil to the will.

I, Jeremiah Sims, do further add this codicil to my last will and testament, that is to say, it is my will that the two coulered boys living in my family to wit Charles and John shall be bound out at the discretion of my executors aforesaid. Witness my hand and seal to this day above written (8 January 1818). Jeremiah Sims
Saul Henkle
John Callison
James Callison

Jeremiah Sims did not include surnames for the two young men living in his family. What surname or surnames did Kate, Isaac, Charles, and John choose to use? Did they remain in Clark County, or even in Ohio?

This was written in hopes of the names of Kate and her sons Isaac, Charles, and John being familiar to a descendant searching for them.