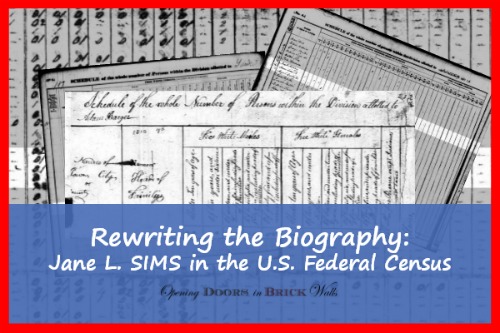 Rewriting the Biography is an ongoing theme for the rough draft notes of a new/updated biography of my 5th great-grandfather James SIMS (1754-1845) of Nicholas County.

Her census analysis has not been easy. She lived long enough to be enumerated on the first census with relationships – the 1880 census. But how I wish the three before, from 1850 to 1870, also had the relationship to the head of household included.

Jane was born in Kanawha County before the creation of Nicholas County in 1818. In 1820 she was the baby girl of the family but had two younger brothers.

In 1830 Jane was a young lady just under 20 and the only daughter still living in the household of James SIMS. She now had three younger brothers. Along with her parents and brothers, there were five slaves in the household, four less than a decade earlier.

The 1840 census was enumerated by visit and not in alphabetical order. Jane and Joseph were living next door to her father James. There were two men in the household who were engaged in agriculture, her husband Joseph and an unknown man who was also in the 20 thru 29 years old age range. Since their marriage in 1831, Jane had given birth to five children: three daughters and two sons.

In 1850 we find the family living next door to Jane’s half-nephew Jonathan SIMS (son of her half-brother William) and her brother Dryden SIMS. Dryden was involved in the settlement of his father James’ estate which could mean that he and his sister Jane were actually living on the land which was part of the estate of James SIMS.

A naming pattern was seen when the names of the children were found in the 1850 census. Jane and Joseph had named their first four children after their parents:

These children were followed by Rhoda Ann, Lorenzo Dow, Catherine, Houstin, and David. The last two would be missing in the next census. Joseph was a farmer and his two older sons, Benjamin 14 and James 12, likely helped on the farm and were not listed with occupations.

In 1857 two of Jane and Joseph’s children married. Their oldest daughter Elizabeth married George PETTIT in January and their second son James F. married Mary Frances WHALEN in March. The PETTIT family was living near Dryden SIMS in 1860 while James and his family were likely missed.

Jane and Joseph were living near other SIMS families as well as Isaac SIMS, the enslaved man James SIMS had emancipated. Isaac owned land which bordered on the land of previously owned by James SIMS. There were, however, unoccupied households on both sides of the DARLINGTON family in 1860. This sets the household apart from the rest of the persons enumerated on the page. But perhaps this is not of great importance as the enumerator, as seen on other pages of the census, appears to have kept track of all unoccupied dwellings he visited in the area.

The members of the household in 1860 caused a lot of head scratching. Elizabeth and James, as mentioned, were married and no longer at home. Joseph and Jane were seen with eight children between the ages of 21 and 9. Rhoda, Lorenzo, and Catherine were carried over from 1850 to 1860 aging 10 years.

Missing on the 1860 census were Mary, Benjamin, Houstin, and David. New on the 1860 census were Rowdy M. age 21, Andrew D. age 15, Sarah A. age 13, Martha M. age 11, and Susan J. age 9? Are their ages correct? Why weren’t the first four found on the 1850 census? Could Andrew D. be the son David age 1 in 1850? If so, were the ages of the girls also off by up to four years? Was Jane the mother of these three girls or were they children taken in by the family? Sarah and Martha were not found in 1850 with the Darlington surname. The three girls were not found in 1870 nor in the register of marriages for Nicholas or surrounding counties.

And what of Rowdy M.? Was he supposed to be Benjamin? Rhoda Ann also went by Rhodie. Could there have been a mix-up in the name for the young man and Rhoda/Rhodie’s name was listed twice?

The 1870 census would not solve the questions caused by the 1860 census. Jane and Joseph’s oldest daughter Elizabeth must have died as her PETTIT children were found living with their DARLINGTON grandparents. George PETTIT, the father of the children, was in the previous household. Jane and Joseph’s son James also died in the 1860s, possibly in 1865 as his youngest child, a daughter was born in December 1865 and named Edith James. His widow and children were living with her mother in Fayette County. Lorenzo Dow married Jane “Jennie” NEAL in 1863 and was living in Kanawha County.

Only two children were living at home, Rosa and Dixon. Rosa is likely an error and should be Rhoda. She would be married with one child by 1880. Dixon age 15 would have been 5 in 1860 but there was no child this young in the family at the time. Would the 1880 census clear this up?

As in 1860, Joseph owned real estate, however, no record has as yet been found to document this.

Jane was the informant for the death of her husband Joseph when he died on 1 February 1875. In 1880 Jane was living with her daughter Rhoda who had married the widower William B. MORRIS and was enumerated as his mother-in-law. Jane was three years younger than her son-in-law William. Rhoda and William had a daughter Valena Victoria born on 5 June 1876.

Also in the household was Joseph A. D. DARLINGTON age 25 and whose relationship to the head of household was brother-in-law. Is this the same young man as Dixon 1870 age 15 and Andrew D. 1860 age 15? Should the age in 1860 have been 5? Was he the youngest son of Jane and Joseph as the relationship to William Morris would suggest? Did he begin to use the first name Joseph after the death of his father?

Jane SIMS, the widow of Joseph DARLINGTON, was not found in the 1900 census. She likely died after the 1880 census in a time period in which death records are sparse for Nicholas County. Where were her children?

Elizabeth had died between 1860-1870 leaving three known children and a widower. I had not been able to trace any of the children until I found a birth record for Elizabeth’s son William L. The date of birth matches that found on a death certificate for a man by the same name who died in 1942. An error was made by the son who declared his death, giving the informant’s mother’s name instead mother of the deceased. The name of the father was not known. The 1889 marriage record of William L. PETTITT and Maria SMITH included the names of his parents: George and Elizabeth. Elizabeth’s son had moved to the southern part of West Virginia, living in Mercer and Mingo counties.

Traces of Mary, Benjamin, Houstin, and David were lost after 1850. I had also lost Catherine after the 1860 census. With the recent find of Elizabeth’s son William, I searched for him in the Ancestry user trees and found a tree for him which includes his aunt Catherine. She married Rev. Anderson Marion NEAL in 1864 or earlier and they had ten children, eight living in 1900 per the census. A quick perusal of delayed birth records and death records for her children show their mother was a DARLINGTON with the middle name Jane, born in Swiss, Nicholas County. Swiss is the town in which James SIMS’ original land tract was located. Records for her family will have to be added to my database as this was found only hours before I was to publish this post.

James’ widow Mary Frances WHALEN died 13 December 1904 per records kept by descendants of this line. She lived Fayette County. The death records of three of the four children who lived to adulthood prove their parents were James DARLINGTON and Mary WHALEN. The death record (index only) of the fourth child who died in Chicago in 1908 does not include the names of his parents who were from West Virginia.

Rhoda who married William B. MORRIS before 5 June 1876 was widowed 5 May 1886 and reported his death. She was not found in the 1900 census. By 1910 she was living in the household of John S. DARLINGTON who had married her only child Valena. Rhoda died in 1915 at the age of 78 in Jefferson district of Nicholas County.

Lorenzo Dow lived in Jefferson, Nicholas County until his death caused by liver and kidney trouble in 1905 at the age of 64. He was the father of nine, four of whom died in infancy while the other five lived long lives dying in their 60s and 70s. His son John S. who married his sister’s daughter Valena lived to be 81 dying in 1952.

No trace of Joseph Andrew Dixon DARLINGTON was found after his marriage in 1882 in Kanawha County to his first cousin Mary F. SIMS (1857-1887), daughter of Charles SIMS and Minerva J. SUMMERS.

In the next installment Charles Fulton SIMS (1815-1891), the third youngest son of James SIMS and his second wife Elizabeth COTTON will be featured. Charles was the father of Mary F. SIMS mentioned in the previous paragraph. Perhaps while working on his census analysis I will pick up a trace of his son-in-law and nephew Joseph A. D. DARLINGTON.

9 thoughts on “Rewriting the Biography: Jane L. SIMS in the U.S. Federal Census”