Up until a few weeks ago, I knew very little about the land owned by my third great-grandfather William CLONCH (1807-1863). He wrote his last will and testament on 17 January 1863, It was recorded on 6 April 1863 in Mason County1 less than three months before West Virginia was admitted to the Union on 30 June 1863.

For background information please refer to the links in the Genealogy Sketch Box at the end of this post. For the short story see my reply to Amy in the comments below. 🙂

The Land is Mentioned in a Will

Mary DOSS and her children had been found living with William CLONCH in 18502 and 18603 on the census. In 1850 Mary and the children were enumerated with the DOSS surname but in 1860 the entire household were listed as CLONCH.

William CLONCH the inferred father of the DOSS children

Earlier research had turned up a land deed in the Mason County deed book 53, page 202, dated 29 April 1892 in which the heirs of William CLONCH sold the property to Louvenia PATTERSON, seen as Loving Ann DOSS in the will. Only the source of the record was given, not the actual wording.

Great importance was given to this document and it was surmised from the content of the record that the children of Mary DOSS, who were now using the CLONCH surname in 1892, were, in fact, the children of William CLONCH and Mary DOSS.

I am extremely grateful to the persons who have researched this line before me and shared their work online and via emails. However, I am no longer a beginner and I want to see the evidence, not just know it is out there.

The Deed Books of Mason County, West Virginia, for the period 1803-1901 are now online at FamilySearch. I located the 1892 deed mentioned above as well as several more which led up to this one.

Two years after the death of William CLONCH we find the first mention of his estate in the deed books. John W. CLONCH, commonly known as John W. DOSS, grants to James W. PATTERSON his undivided interest in a certain tract of land devised to his mother Mary DOSS during her lifetime by William CLONCH. The tract of land having 148 acres more or less and bounded by the land of John W. Deem, James H. Hooff, Charles T. Beale & John Sheline.

James W. PATTERSON was the brother-in-law of John W. CLONCH. Lavina Ann DOSS married about three months after her father’s death. Her parents are listed as Wm Clonch and Mary Doss on the marriage record, however, the name of the father, Wm Clonch, has been struck out on the document.

The land, therefore, remained in the family. This is the 1865 record with transcription. 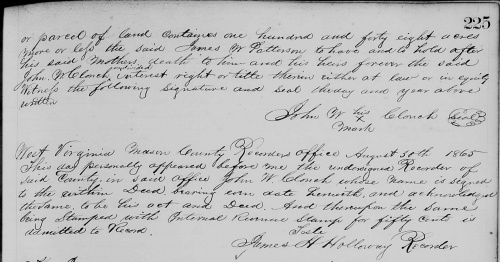 This deed made this 30th day of August 1865 between John W. Clonch of the first part heir at law of William Clonch deceased and James W. Patterson of the second part Witnesseth that for and in consideration of Seventy five dollars in hand paid to the party of the first part by the party of the second part the receipt when of is hereby acknowledged the said John W. Clonch, commonly known as John W. Doss doth grant unto the said James W. Patterson all his undivided interest in a certain tract or parcel of land lying in the County of Mason and State of Virginia and adjacent & bounded by the land of John W. Deem, James H. Hooff, Charles T. Beale & John Sheline and is devised to his mother Mary Doss during her life by William Clonch whos (sic) Will is recorded in the Recorders office in Mason County and at her death to her heirs wherein the said John W. Clonch is one of said heirs which tract or parcel of land contains one hundred and forty eight acres more or less the said James W. Patterson to have and to hold after his said Mothers death to him and his heirs forever the said John W. Clonch undivided interest right or title therein either at law or in equity Witness the following Signature and Seal the day and year above written.
……………………………………………John W. Clonch (x his mark)

West Virginia Mason County Recorders Office August 30th 1865
This day personally appeared before me the undersigned Recorder of said county in said office John W. Clonch whose name is signed to the within Deed bearing even date herewith and acknowledged the same to be his act and deed. And thereupon the same being Stamped with Internal Revenue Stamp for fifty cents is admitted to Record.
……………………………………………Teste
……………………………………………James H. Holloway, Recorder

In 1875 James and Lavina PATTERSON sold the tract of land back to John W. CLONCH DOSS. Both surnames are on the land deed for the grantee. The 1865 land deed is referenced in the 1875 deed. Mary Ellen DOSS and her heirs are also mentioned in the deed showing the mother of the DOSS children was still living. This is the first record I’ve seen with her middle name.

The land remained in the family. This is the 1875 record with transcription.

West Virginia Mason County Court Clerks office September 17th 1875.
J. E. Kimberling Clerk of the County Court in and for the County and State aforesaid do certify that J. W. Patterson and Lavina A. his wife whose names are signed to the writing hereto annexed bearing even date herewith have this day acknowledged the same before me in said office to be their act and deed and the said Lavina A. Patterson wife of the said J. W. Patterson being examined by me privily and apart from her said husband and having the writing aforesaid fully explained to her she the said Lavina A. Patterson acknowledged the same to be her act and declared that she had willinglyly (sic) executed the same and does not wish to retract it and thereupon the same is admitted to record.
……………………………………………Teste
……………………………………………E. Kimberling Clerk

What Happened to the Land after 1875?

After 1875 there are no entries for Clonch or Doss individuals selling the land from the estate of William CLONCH until four deeds are made in 1891 and 1892 and recorded in 1892 and 1893. These will be shared together in the next post.