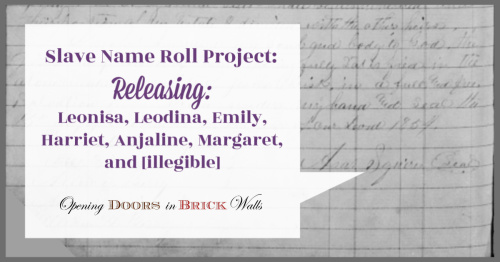 The Last Will and Testament of Asa Squires, written in 1854 and recorded in 1865

I Asa Squires of the County of Braxton and State of Virginia Being of Sound mind and disposing memory for which I thank the Lord, and calling to mind the uncertainty of human life and being desirous to dispose of all such worldly estate as it hath pleased God to bless one with:
First: I devise to my beloved wife Sarah C. Squires all the personal property (Slaves only excepted) of my estate including horses, cattle and other stock on the premises together with all the household and kitchen furniture and farming utensils and library and whatever money, bonds and accounts may be due me at my decease after paying my funeral expenses and just debts for her my beloved Sarah C. Squires, to keep to give and dispose of amongst her children, as she may see fit proper to do or have done.
Secondly: I bequeath to my beloved wife Sarah C. Squires during her natural lifetime, All my home Sted place to wit: The 120 acres tract of land deeded to me by Uriah Byrne also the 22 acre tract patented to me the 12 Augt 1818 adjoining the Reeder tracts; also, the residue of the 222 acre of patent not deeded to Shadrack Chaney & wife, also, that portion of the 300 acre tract of patent, lying from the top of the ridge between the John Steel place and my home place, bordering on with the 222 acre tract before named, including them all as parcels above named, will as I suppose make 400 acres, more or less, to her during her natural lifetime, also, I bequeath to my beloved wife Sarah C. Squires, Those I warrant to wit: Leonisa, Emily, Harriet, Anjaline, [illegible], and Margaret during her natural lifetime to be taken care of by her on the place or hired out, as she may think best.
Thirdly: Immediately after the death of my beloved wife Sara C. Squires the land allotted to her as just above described ?? to for, my son Daniel S. Squires, his heirs and assigns, for his vigilant care and attention to his parents during their natural lifetime, and also to see that the three old colored women Leodina, Emily and Harriet are comfortably provided for after his parents death, their taxes paid, kept at home to enjoy their freedom as well as the laws of the State may permit them to do. Also that to remain with D.S.S. or some of the other heirs (my children, as they may choose

or allot, as the other servants and in the same ways & on the same principles the other servants are.
And Fourthly: Having a wish for the welfare & happiness of the servants (all of them, and some of my heirs not wishing to have anything to do with them, ??? have or expect to have any claim on those of my heirs that do or may take care of them and further I entail those Servants to my children and to their bodily heirs not to be liable to be Sold for any debt of theirs ??? Execution or otherwise at any time from among the children & their bodily heirs, Also it is my wish that those of my children who do take care of them and raise them, that at some proper age, Say from 2 to 28 years old, with their consent, they be sent to Liberia Colonized & see appendage to this last will, Having disposed of what property it has pleased the Lord to bless me with in that way and named, that seems the best to me at this time.
I now appoint my beloved wife Sara C. Squires, together with my son Danl S. Squires my legal Executors to carry out and Settle this my last will and testament as above witness, expressed and directed fully confiding in their probity? & integrity would not wish them to be bound in any other security for the ?? performance of this my last will and testament.
And further I ask that if any one of the children or heirs should not be satisfied with these my views of bequest should attempt to alter the same by a law I wish they attempting to do so by actual suit shall be disinherited and their portion of my Estate & divided with the other heirs.
I now commend my Soul and body to God, the Giver and Governer of them, resting fully satisfied in the atonement and merits of Jesus Christ in a full and free salvation. Given under my hand and seal the 15th day of November in the year of our Lord 1854.
………………………………………Asa Squires (Seal)
Witness be this my last
will & testament
Allen S. Berry
Asa Squires Jr.
William H. Berry

Braxton County to wit:
Recorders Office December 11th 1865
The last will and testament of Asa Squires deceased was this day presented to me as Recorder and proven by the oaths of Allen S. Berry and Asa Squires Jr. Subscribing witness thereto, and ordered to be recorded.
………………………………………Teste G. F. Taylor Recorder

In the above will we see: Leonisa, Emily, Harriet, Anjaline, [illegible], and Margaret as well as Leodina, Emily and Harriet. Are the women named Leonisa and Leodina actually the same person? Was the name written incorrectly the first or the second time? It would appear the names were listed from oldest to youngest. If the first three were the oldest, were they also the women referred to as the three old colored women?

There is one name which I found too illegible to read. It looks like Tom with a squiggle and then osi. Unless someone else can read this, this enslaved person’s name cannot be released.

Asa Squires was living at the time of the 1850 and the 1860 census. Slave Schedules are available for both of these census years. In the 1850 listing for Asa Squires there are two older women age 60 and 42.2

In 1870 there was a mulatto woman named Harriet Squires living in Braxton County.4 She was 59 years old. Could she be one of the two women seen in 1860 as 50 and 48 years old? Having the same first name as the third named in the will, would she more likely be the 48 years old woman in 1860 and now 58, only a year off?

I have no proof Harriet Squires was one of women named in Asa Squires will. However, in HH#23-23, two households after Harriet’s, we find Asa’s son Daniel S. Squires with his family. There are no other black or mulatto families in the immediate area.

Does anyone recognize these ladies’ names? Can someone help decipher the name of the woman who is listed as [illegible] in the title of this post?