In the land deed index for grantor and grantee, I could not find an entry for my 3rd great-grandfather William CLONCH even with different spellings of the name, i.e. CLAUNCH, CLOUNCH. Neither his father Dennis CLAUNCH nor his mother Nancy BEASLEY owned land per the deed books. Neither left a will conveying land to William and/or to of his siblings: Elizabeth, John, and Sarah.

► Was it possible William CLONCH did not legally own land when he made his last will and testament on 17 January 1863?1
► If he didn’t own land, how could he will his land to Mary DOSS and her DOSS children?
► How could his heirs later convey land as a group to three of the DOSS siblings, also known as CLONCH, in 1892 allowing it to remain in the family?

A Tract of Land Containing 148 Acres

William CLONCH lived with Mary DOSS from sometime before 1840 until his death in 1863. They were not married. Eight children were born between 1840 and 1855 during the years William and Mary were together. William left a last will and testament naming Mary DOSS and her seven living children as his heirs. These children later went by the CLONCH surname. DNA results show descendants of these children carry Clonch/Claunch and Doss DNA.

The 148 acres sold in 1885 had similar call lines as the three tracts of land which were sold in April 1892 by the heirs of William CLONCH.4 I had been able to plot two of the tracts but the third had a problem call and I could not plot it. I thought by plotting the three tracts I would be able to put the pieces together to form the original 148 acres.

Was it only a coincidence William’s and Alex’s lands contained the same amount of acreage?

Reading and transcribing the land deeds of Alexander CLONCH brought to light some thought-provoking information. The grantor of the land sold in 1866 was a group of persons, children and their spouses of the deceased Richard GERNON, who were being represented by their attorney’s representatives through a power of attorney. 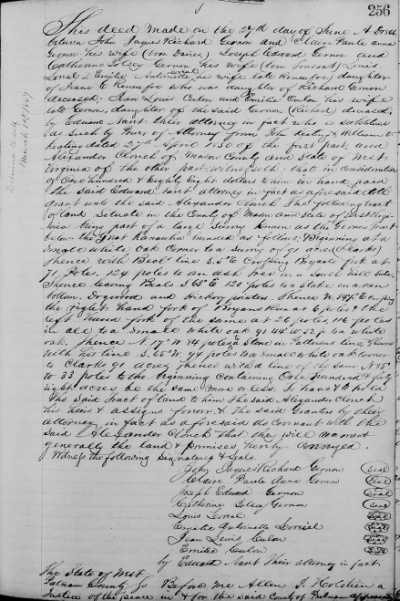 The State of West (sic, Virginia missing)
Putnam County ss Before me Allen J. Holstein a Justice of the Peace in & for the said County of Putnam appraisal 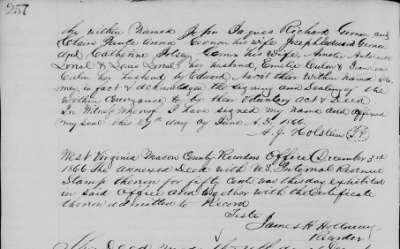 the within named John Jaques Richard Gernon and Clair Paule Ann Gernon his wife Joseph Edward Gernon and Catherine Tolsey Gernon his wife, Amelie Antoinett Loreal & Louis Loreal her husband, Emilie Culon & Jean Louis Culon her husband by Edward Naret their within named Attorney in fact & acknowledged the signing and Sealing of the within conveyance to be their voluntary act & Deed.
In witness Whereof I have signed my name and affixed my seal this 27th day of June A. D. 1866.
……………………………………..A. J. Holstein J.P. seal

As seen in the above deed, the land was part of a larger survey known as the Gernon Tract. I checked the index again to see if others had been granted land from this tract.

The first mention of the Gernon Tract was found in a deed dated 1821. The deed is a history lesson in itself. It mentions acts of Congress which allowed direct taxes to be collected from landowners.

On 9 January 1815 Congress passed “an act to provide additional revenues for defraying the expenses of government and maintaining the public credit, by laying a direct tax upon the United States, and to provide for assessing and collecting the same.”5 On 5 March 1816, this was repealed by Congress reverting back to an act passed in 1813.6 Both of these acts are mentioned in the 1821 deed.

Taxes were due on the Gernon Tract and the whereabouts of the owner were unknown. In fact, the tax collector did not mention the name of the owner, Richard GERNON, in the 1821 deed. Under an act of Congress to lay and collect a direct tax (July 14, 1798), before the collector could sell the land for non-payment of tax, he was required to advertise a copy of the list of lands and the statement of the amount due for the tax along with the notification to pay in sixty days. The tax due on the Gernon property was advertised in the Richmond Enquirer. John L. MERTENS of Hanover County paid the tax and acquired the three tracts of land containing 4,375 acres, 1,500 acres, and 200 acres for a total of 6,075 acres.7

In 1823 MERTENS sold the land back to the owner who had been delinquent on his tax payments, Richard GERNON, formerly a U.S. citizen living in Philadelphia, now residing in Paris, France. Was GERNON’s non-residence in America the reason he did not pay his taxes?

As later deeds were consulted, I learned the tract was being reduced by surveys as pieces were sold, apparently, to the persons who had been living on and working the land. The original tract situated (per 1834 deed) in Mason County originally containing twenty one thousand five hundred Acres, Patented to Richard Smyth assignee of Henry Banks the Sixth day of December one thousand Seven hundred and Ninety four & conveyed by the said Patentee to the above named Richard Gernon, by deed dated 29 August 1795 Recorded in the clerks office of the General Court of Virginia at Richmond 16 Novr. 1795.

The land deeds for the Gernon Tract are a genealogical find for those interested in the family of Richard GERNON and his wife Antoinette GAUSE whose name was mentioned in the 1834 deed.8 I was intrigued when I found his wife’s maiden name was GAUSE as, after separating from William CLONCH, his ex-wife Ann Eliza HILL married a man named Andrew J. GAUSE, later seen as GAUZE. It was one of her GAUZE descendants’ fault I’ve been writing about the land deeds since my post, I No Longer Need that Lookup, Folks!

As I perused each of the land records for Gernon land being sold, I found the descriptions of the land changing as the land was being divided up into lots. New proprietors of the adjoining land were mentioned. Also, lots adjoining the land would be described as land on which certain persons lived – not land owned by that person. Later the individuals living on the land were found buying the lot. For example, in 1861 John SHELINE bought a tract of land comprising 442 acres which had been surveyed in 1856 by John J. POLSEY:

It would appear that William CLONCH was living on land which had been surveyed for him as late as 1856. At the time of his death, he was likely expecting to buy the land but the deeds had not been drawn up and recorded.

In 1885 Alexander Clonch and his wife Tobitha deeded land to his mother Mary DOSS and ALL of her DOSS children, including himself. There is no mention in the following deed that Alexander CLONCH is the same person as Alexander DOSS but the deeds discussed in the previous posts show the sons of William CLONCH went by CLONCH and DOSS.

State of West Virginia, Mason County ss:
I John R. Dabucy a Justice of the Peace in and for the County and State aforesaid, do certify that Tobitha Clonch the wife of Alexander Clonch whose names are signed to the writing above bearing date on the 9th day of April 1885 personally appeared before me in the County aforesaid and being examined by me privily and apart from her husband and having the said writing fully explained to her she the said Tabitha Clonch acknowledged the said writing to be her act and declared that she had willingly executed the same and does not wish to retract it. Given under my hand this 13th day of April 1885.
……………………………………..John R. Dabucy J.P.

West Virginia, Mason County Court Clerk’s Office April 14th 1885. This Deed was this day presented in my office and thereupon, together with the certificates thereto annexed, is admitted to Record.
Teste:
……………………………………..J P R B Smith Clerk

What I Learned While Doing the Research

I think it’s possible my 3rd great-grandfather William CLONCH was living on the land for several decades before he died in 1863 and he intended to pass it on to his DOSS children and their mother Mary E. “Polly” DOSS. In 1860 when the census was enumerated his Value of Estate Owned was $444 for Value of Real Estate and $120 for Value of Personal Estate. Why would he have real estate valued when he did not legally own it? I am not aware of the practices of the time. Did William CLONCH have the land he was living on and working surveyed? And did he consider it his land after the survey? I checked the index to surveys and his name was not listed.

While searching the deeds index I found my great-great-grandfather Alexander CLONCH (1842-1910) obtained land in 1866 and sold the same in 1885. It was interesting to find Alex owned land in Mason County, West Virginia, from 1866 until 1885. The sale of the land fit into the time period when he was known to be moving to Fayette County as well as applying for his Civil War pension.

From the above, would you also say the land Alexander CLONCH bought in 1866 and sold to his mother and siblings in 1885 was the same piece of land William CLONCH lived on during his later years and willed to Mary DOSS and her children? Or do I have to do more work and plot all of the lots from the Gernon tract and fit the pieces of the land puzzle together to prove the three lots sold by the heirs in 1892 were the land Alexander bought in 1866 and sold in 1885?

Who was Richard Sainsbury of North Somerset? How was he related to Wiltshire families like Alford, Bracher, Compton, Elloway, Hinton, Pinnell, Sparey...?

Enjoying a fact finding mission through my progenitors

Helping others discover their roots