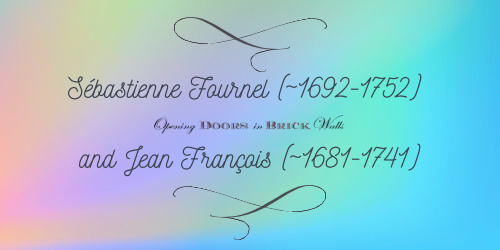 This is the 9th in a series of posts on my earliest FOURNELLE ancestors. After setting up the stage, introducing the main characters and supporting cast, I am now discussing each of the children of my 7th great-grandparents Jean FOURNEL (1655-1721) and Catherine SETON (1657-1702). All posts written to date are listed at the end of this post.

Jean FOURNEL and Catherine SETON married about 1677. Sébastienne was their sixth known child and third daughter. Her birth followed that of her siblings:

Baptismal records for Herserange, the parish Saulnes was attached to, are non-existent for the years 1689-1693. When Sébastienne died in 1752 her age at death was 60 therefore she was born about 1692. Due to the paucity of records, no baptismal entry was found.

She was not the last of Jean and Catherine’s children. She had two more (perhaps three) siblings before her mother died on 21 September 1702.1

Sébastienne was about 10 years old when her mother died. Her oldest sister Françoise was 24 years and probably spent the next six years raising her siblings before she married in 1708 at the age of 29. This marriage was followed by the marriages of Sébastienne’s two oldest brothers in 1710 and 1713.

A month after the 1710 marriage, Sébastienne became the godmother of her sister Françoise’s daughter Sébastienne COURTOIS baptized on 27 July 1710 in Saulnes. The godmother was 18 years old.2

The 1713 marriage took place in January. A few months later, Sébastienne’s relationship with a man produced a son born and baptized on 9 December 1713 in Saulnes. The mother declared at the time of birth that the father was Jean CHOLOT. She gave her son the name Jean. His godparents were Jean DELVA and Marie FOURNEL.3 Marie was his mother’s younger sister. Bastienne, as she was sometimes referred to, was not married to Jean CHOLOT. It isn’t known if the child was given his father’s surname as no further record has been found.

The children of Jean FOURNEL and Catherine SETON appear to have married in order of birth. I’ve never heard of this being a pattern families followed. Following the marriages of her brother Henri who married before 1716 and her sister Jeanne in July 1720, it was Bastienne’s turn to marry.

Sébastienne FOURNEL married Jean FRANÇOIS on 24 November 1720. Sébastienne was 28 years old and her groom was 39. Jean was from Crusnes (Meurthe-et-Moselle, France) and the widower of Marie MARCHAL. Sébastienne’s brothers Jean and Jacques FOURNEL were her witnesses. Witnesses for Jean were his brother (of the same name) Jean FRANÇOIS and his cousin François NICOLAS.4

Ten months after her marriage, Sébastienne and her siblings lost their father Jean FOURNEL when he died on 3 September 1721 in Saulnes.5

Bastienne and her husband Jean had seven children

Marie Catherine FRANÇOIS was born and baptized on 19 October 1721. Her godparents were Jean BOULANGER and Marie Catherine FOURNEL, the child’s aunt.6 It’s possible that the godmother was a younger sister and not Marie FOURNEL born in 1696. Marie Catherine FRANÇOIS never married and died at the age of 37 on 16 February 1759. The witnesses at the time of her death were Philippe BAILLIEU, a priest, and Jean Baptiste THOMAS, a synodal (member of the church council).7

Jean FRANÇOIS was born and baptized on 20 December 1722. His godparents were Jean CLAUDE, a young man, and Margueritte FRANÇOIS, a young girl. Both of the godparents were from Bréhain-la-Cour.8 No further trace of Jean has been found.

Jean Baptiste FRANÇOIS was born on 25 September 1724 and baptized two days later. His godfather was Jean COURTOIS and his godmother was Marguerite LELIEVRE. His name on his baptismal record was Jean.9 He married Marie Françoise THOMAS (1728-1796) on 27 February 1754 in Herserange. Witnesses to the marriage were his cousin Henry FOURNELLE and his uncle Jacques FOURNELLE; Jean and François THOMAS were witnesses for the bride. His name on his marriage record was Jean Baptiste FRANÇOIS.10 The couple were the parents of at least seven children born between 1755-1772 (research is ongoing). Jean Baptiste died on 14 April 1795 in Saulnes.11 His wife died the following year.12

Anne Sébastienne FRANÇOIS was born on 23 September 1726 and baptized the following day. Her godfather was Pierre FOURNIER, a young man, and her godmother was her cousin Anne Sébastienne COURTOIS.13 Note: In this record, the father’s first name Jean was crossed out and replaced by François. No further trace of Anne Sébastienne has been found.

Charles FRANÇOIS was born on 12 October 1728 and baptized the following day. His godparents were Charles PELARDIN and Elisabeth PELARDIN.14 This baptismal record is so light that I could not read the surname of the godfather and had to rely on information found in the family book for Saulnes. No further trace of Charles has been found.

Marguerite FRANÇOIS was born on 10 March 1730 and baptized two days later. Her godparents were Jean SMELER, a young man, and Marguerite DROUET, a young girl.15 Marguerite married François DOMANGE (he signed DEMENGE) on 3 November 1785. Per this marriage record, Marguerite was the widow of Michel BAILLIEU. Her groom was a sergeant in the Régiment Royal de Roussillon and permission was given by his commanding officer, the Marquis de Vauborel, brigadier of the King’s armies, colonel of the royal regiment of Roussillon. Marguerite’s brother Jean Baptiste was a witness at the marriage.16 Marguerite died on 1 March 1799 at the age of 68.17 Her first marriage has not been researched, i.e. it is not known if she had children.

Marie Joseph FRANÇOIS was born on 14 December 1731 and baptized two days later. Her godfather was Jean THOMA, a young man, and Marie LELIEVRE.18 Marie Joseph served as the godmother of her niece Marie Joseph, daughter of Jean Baptiste FRANÇOIS and Marie Françoise THOMAS, on 15 July 1755 when she was 23 years old.19 No further trace of Marie Joseph has been found.

Sébastienne’s husband Jean FRANÇOIS died on 19 October 1741 at the age of 60. Informants on the death were François COLLIGNON, the schoolmaster, and Pierre THEATE, a laborer, both of Herserange.20 On the death record the first name Jean was marked through and François written above. This correction is also marked out. Was the correction made at the time the record was produced or did someone make the changes later?

This question made me take another closer look at all records mentioning Jean FRANÇOIS. When Bastienne and Jean married his brother who had the same name was one of his witnesses. Both were named Jean. All baptismal records of the children except one has Jean as his first name. When his daughter Anne Sébastienne was baptized in 1726 her father was listed as Jean FRANÇOIS. With another pen and in possibly other handwriting, Jean was marked out and François was written above. In 1754 when his son Jean Baptiste married, he was named as the son of the deceased Jean FRANÇOIS. In 1759 when his oldest daughter died, his name was given as François FRANÇOIS. This was written at the time the record was produced and was not a correction.

One more record was found with the name François FRANÇOIS.

Sébastienne was a widow for 11 years and died on 29 December 1752, at the age of 60 like her husband. Witnesses to her death record were Philippe BAILLIEU, a priest, and Jean PERLOT, a laborer from Herserange. Sébastienne was described as the widow of François FRANÇOIS.21

Why were records found in 1741, 1752, and 1759 with the husband of Sébastienne named François instead of Jean? Why was the change also made to the birth record of only one of the children, Anne Sébastienne in 1726? Perhaps future research into Jean Baptiste and Marguerite, the only two children who married, will bring more to light to the question.

Three of Sébastienne’s siblings survived her. Henri died the following year, Jeanne died after 1756, and Jacques died in 1774.

Jacques FOURNELLE was the last of the children of Jean FOURNEL and Catherine SETON to marry. He will be featured in the next post.

Going Back to the Earliest Fournelle Ancestor (Part 1)

Going Back to the Earliest Fournelle Ancestor (Part 2)

Going Back to the Earliest Fournelle Ancestor (Part 3)