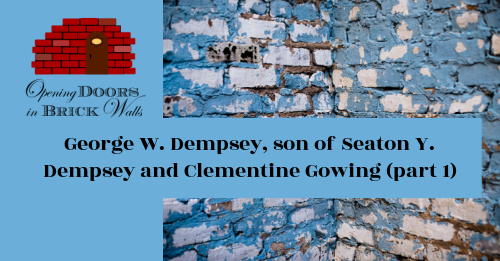 I have a theory I’m working on. It might not be very smart of me to share it here, but I see no other way to get others involved in helping me solve this mystery.

I know what happens when the wrong information is posted on the internet. People believe it, re-post it, and, suddenly, it becomes an accepted but unproven fact. The ancestor or relative’s story is changed as people go click-happy accepting hints.

In this first of two parts, a bit of background information will be shared on the person of interest.

George W. DEMPSEY was the oldest child of my 3rd great-grandparents Seaton Y. DEMPSEY and Clementine M. GOWING who married 3 January 1829 in Amherst County, Virginia.1 Seaton, per the census, was the head of a household in 1830 with a young man, likely his younger brother Wesley, and a young woman, his wife Clementine.2 The young married couple didn’t yet have children. By 1840 they had three children including George who was less than 10 years old and over five.3 In 1850 George was still living at home and 19 years old.4 No birth records were found for Amherst County at this time and George’s birth has been estimated at about 1831.

On 20 December 1852, George married Rhoda A. STATON in Amherst County.5 Less than a year later, on 19 November 1853, their son Andrew Seaton DEMPSEY was born.6 Sometime after Andrew’s birth, Seaton Y. DEMPSEY’s family moved to the Fayetteville Township area of Fayette County, (West) Virginia. George and Rhoda were in his father’s household in 1860 with their son “Ceton A.” listed as age 5.7 If other children had been born to the couple before 1860, they did not survive. George’s oldest sister Geneva Elizabeth DEMPSEY remained in Amherst County and his brother William S. DEMPSEY, the second oldest son, had married and remained in Rockbridge County.

On 23 May 1862, during the Civil War, George W. DEMPSEY was arrested by Lt. Col. Henry W. BRAZEE of the 9th Virginia Volunteers. George, age 31 years, was described as 5 feet 9 1/2 inches, light complexion, dark hair, blue eyes, and long sprouts (whiskers). He said he had done nothing to cause the arrest.8

A year later George and Rhoda’s son Robert L. DEMPSEY was born in March 1863.9 Four years later, George and Rhoda had a daughter on 11 May 1867 in Fayetteville Township.10 She was named Polina E. and would go by Bettie and Lina in later years. In 1870 the little family was found in the census in Fayetteville Township: George A. (sic), Rhoda, Andrew S., Robert L., and Pertina E.11

On 29 December 1874, Andrew S. DEMPSEY, son of Geo. W. and R. A. DEMPSEY, married in Fayetteville. The marriage register entry does not indicate if the parents were living or deceased.12

There is the possibility that George was the man mentioned in a document dated 8 March 1876 when a contract with one Geo. W. DEMPSEY for road work on Arbuckle road in Fayette County was annulled.

I’ve researched all three DEMPSEY lines who lived in Fayette County at this time. There was a younger George Washington DEMPSEY, son of John W. DEMPSEY and Amelia RIDDLE, born in December 1851 who would have also been old enough to be the man mentioned in the record above. I cannot at this time say if this contract was for George b. 1831 or George b. 1851. I had planned on sharing the images and transcription of the document but decided against it. Anyone interested in the document can view it at the link in the citation.13

George W. DEMPSEY and his wife were not found in the 1880 census. Therefore, there is a decade from 1870 to 1880 in which their whereabouts are unknown.

The death of George W. DEMPSEY

George W. DEMPSEY did not die on 16 November 1879 and he was not buried in Hampton National Cemetery in Hampton, Virginia, in grave number 5369.

The man buried in Hampton National Cemetery served as a volunteer in Company K of Regiment 8 of New Jersey.14, 15 He was a 70 years old widower and had been a resident of the National Soldiers Home for 5 years16. He was born about 1809 and over 20 years older than George W. DEMPSEY of Fayette County. Records found for this man’s death have been erroneously attached to George W. DEMPSEY, son of Seaton Y. and Clementine.

I learned the date of death was wrong, i.e. not for George W. DEMPSEY of Virginia, by viewing the documents. This is why we should always view the available images and not rely on the index. If only an index is offered, it is wise to review the source information to learn if the records are available in image form on the same site or on another.

With the confusion concerning George’s death in 1879 out of the way, what happened to him? Where was he in 1880?

The Children of George W. DEMPSEY and Rhoda A. STATON from 1880 until…

In 1880, two of the three known children of George W. DEMPSEY and Rhoda A. STATON were found in the census. They lived about 165 miles apart. That may not seem like much in our days but in 1880 this was not a quick drive on the interstate.

Andrew Seaton DEMPSEY (1853-1924) was 27 years old, married with two children, and living in Fayetteville17 where the family had been since coming from Amherst County around 1855.18

Andrew would remain in Fayetteville and raise a family of nine children. No death record has been found but his tombstone in Huse Memorial Park indicates he died in 1924.

The whereabouts of Robert L. DEMPSEY (1863-aft. 1930) in 1880 is unknown. Robert married Mary Frances DARR in Kanawha County in 1892. None of the records found name his parents and a record of death is missing. Robert and his wife gave their children unusual middle names which strongly support his being George’s son. His oldest son was named Paul Seaton, his youngest son Edgar Younger (the assumed middle name of his great-grandfather Seaton Y. DEMPSEY), and his son Robert Darr was given his mother’s maiden name.

Bettie, as she was more often known, lived in Rockbridge County, Virginia, from at least 1884 when her first daughter was born in Cornwall.20 Bettie had eight children before marrying William W. SORRELS in 1916. Her 1941 death certificate gives her mother’s name as Rhoda STATON and her father’s name as not known.21

What Happened to George W. DEMPSEY?

With two of the three children of George and Rhoda accounted for in the 1880 census, several questions remain. Where were George, Rhoda, and Robert in 1880? Why was their 13-year-old daughter found in Amherst? Were both George and Rhoda still living, only one of them living, or neither?

Assuming George W. DEMPSEY was living in 1880, where might he have gone? Could he have started a new family? Have descendants of his known and maybe unknown children had their DNA tested?

The second part of this post will be published in two weeks’ time as next Sunday’s post will be My Ancestor Score as of Valentine’s Day 2021.