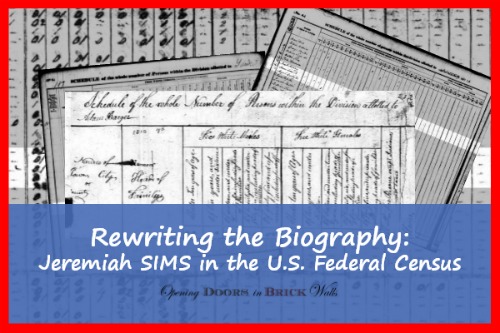 Rewriting the Biography is an ongoing theme for the rough draft notes of a new/updated biography of my 5th great-grandfather James SIMS (1754-1845) of Nicholas County.

In my last post in this series, I analyzed the census records of James SIMS (1754-1845). I will now continue with his children beginning with his oldest son from his first marriage to Phebe (maiden name unknown). Jeremiah SIMS (1777-1824) did not move to Kanawha County, Virginia, with his father, stepmother, and siblings prior to 1800. He remained in Bath County, Virginia, where he married Sarah MILHOLLIN on 26 November 1800.

As was mentioned in the previous post the 1800 census schedules for Virginia were lost. There are no online tax lists for Bath County for the time period around 1800.

I found in the FamilySearch catalog the book Ohio 1810 tax duplicate arranged in a state-wide alphabetical list of names of taxpayers : with an index of names of original entries compiled by Gerald M. Petty and published in 1976. It is available at the Family History Library and on microfilm but not online.

I also located the Tax records of Ohio, 1801-1814 and Duplicate tax records : 1816-1838 for Champaign County, Ohio in the FamilySearch catalog. More time and research is needed to find Jeremiah SIMS on the tax lists. I was unable to locate him on my first perusable of the tax records of Champaign for the years around 1810.

Jeremiah was found on Duplicate tax record : 1818-1838 in Clark County for the years 1818 and later. Although these records will be useful later when his land holdings are studied, they will not be discussed at this time as a listing was found for Jeremiah SIMS in the 1820 census.

Jeremiah was the head of a household in German Township of Clark County. He was 43 years old and engaged in manufacturing. David Fridley, a member of my Sims group of researchers who helped with the original biography years ago, wrote, “given his family history, he was likely a gunsmith or blacksmith as his father and brothers were.”

Jeremiah appears to have had six children at home, five males and one female. One of the older males has not been identified. His wife Sarah was also 43 years old.

Also in the household were three free colored persons. Ohio abolished slavery when the state was formed in 1803, therefore, they had to have been free persons and not slaves. This was discussed in my post: Slave Name Roll Project: RELEASING: Mary, Isaac, Charles, and John.

Not with Sarah was the oldest son Thomas who was named after Sarah’s father, Thomas MILHOLLIN. He was not found in the 1830 census. He married Sarah DONOVAN in 1822 and had at least three children by 1830.

Jeremiah and Sarah’s second son William, perhaps named after Jeremiah’s oldest brother, was married and living with his young wife Eliza DONOVAN in Clark County. Eliza was likely a sister of Sarah DONOVAN who married William’s brother Thomas. The 1830 census was in alphabetical order and not by order of visit by the enumerator. It is probable that William and his young wife were living close to his mother Sarah or even with her and his siblings.

Several months after the 1830 census was enumerated some deadly sickness fell upon the SIMS family in Clark County. William died on 22 September 1830 followed by his sister Phebe eight days later. William had been married barely thirteen months. A little over a month later, his youngest brother Jeremiah died on 5 November 1830. The mother Sarah was left with only two sons, James who was still at home a few months earlier and Thomas who was not found in the 1830 census.

By 1840 the only two living sons of Jeremiah SIMS had gone separate ways. Thomas was living with his family in Greenup County, Kentucky, and James was with his family in Logan County, Ohio. James, a farmer, would remain in Logan County until his death in 1887. His older brother Thomas, a physician, moved his family to Platte County, Missouri before 1850 and then to Daviess County, Missouri before 1860.

The next child of James and Phebe SIMS was William who will be discussed in the next post.