I’ve been writing about and sharing photographs from this collection since April 2015. During this time I’ve heard from three persons who recognized their ancestor or ancestors in the photos.

I want to tell you about the most recent one. Scot Holt wrote to me via private message to my Facebook page Opening Doors in Brick Walls. He recently began working on his family tree. His mother is a LILLIE and he’d found my post on his great-great-grandfather Albert Spencer LILLIE (1848-1913). He descends from Albert through the son of the youngest son Robert Wiley LILLIE (1895-1947) and knew very little about the LILLIE side of the family. My problem was that I had a marriage and two daughters for Robert but no son. In fact Robert was missing in the 1930 and 1940 census. His wife was found in with their oldest daughter in 1930 and 1940 but the second daughter was missing in 1930. If one daughter was missing in 1930, was it possible other children were missing? On the other hand, could Scot be barking up the wrong tree?

I checked and found his grandfather Robert Walton LILLIE at the age of 3 years in the 1930 household of his uncle and aunt Ray and Clara OWENS. This had to be him as Robert Sr.’s wife was Neele Audrey OWENS. I would have to look into the OWENS family to see if Neele and Ray were siblings but it looked like Scot was on the right track.

Scot wrote back, “This is definitely him. I looked at your page and my mom has a similar picture of Neele Audrey Owens” and promised to dig through a box of stuff his grandma left him to see if he could get some more information for me.

Less than five hours later he wrote, “Thought you might like to see this picture. It’s all of Albert’s children, minus one.” 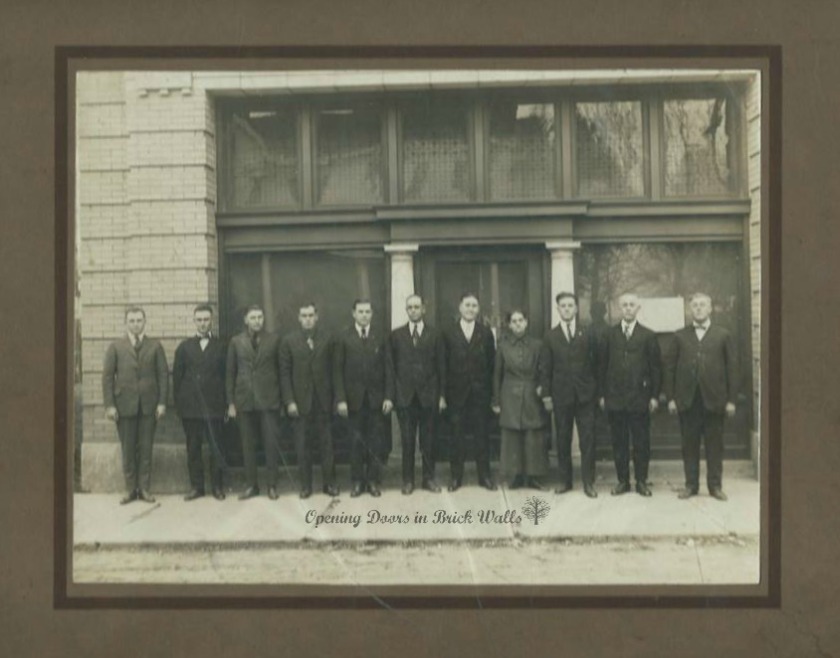 You might remember my post on the 1920 LILLIE Family Reunion in which I included the same photograph:

Ten men and a woman were lined up in front of a bank. My cousin Joe Rooney had labeled it “SamRoy3rdleft.” When I was working on the post I compared photos of Samuel Royalty “Roy” LILLIE, son of Isaac, with this photo and #5 was Roy. But who were the others?

I noticed everyone in the lineup was also in the family group photo and wearing the same clothes. It had to have been taken the same day as the reunion and, with the exception of Roy, it looked like a lineup of youngest to oldest (left to right) of the sons and only daughter of Albert Spencer Lillie and Pernecia Elizabeth Glass. Cousin Joe agreed with my idea and we came to the conclusion that Roy was standing in for Reuben D. LILLIE who was the family black-sheep and had gone underground after robbing banks – at least according to one cousin’s version!

My new cousin Scot, 5th cousins through Landon S. GOWING and Sally CRISP, not only sent me his copy of the photo above but also a view of the back.

On the left side:

On the right side:

Scot’s copy of the back of the photograph proves my labeling of the picture was right on the money!

This side of the family has always been a bit of a mystery so I’m very excited to share information with you or anyone else who would like to get in touch with me.~ Scot Holt

Even though Scot says the Lillie side of the family has been a mystery he had been told there was an uncle who went to prison. This fit in well with the story of why Reuben was missing at the 1920 family reunion. Now all we need is for another cousin to take the bait and get in touch with the answer to this mystery.

This newspaper clipping was found with the old photographs. It is not dated and does not include the name of the newspaper.

L. Vance LILLIE (1920-1993) was the son of Thelma HOLT (1901-1984) and Samuel Royalty “Roy” LILLIE (1895-1979). In his youth, he suffered from tuberculosis and had only one functioning lung. The pulmonary impairment did not keep him from becoming a successful adult. As seen in the article, in 1960 Vance LILLIE and Robert P. Cosgriff started up the Cosgriff Company, a fund-raising consultants organization. Vance was named the first member of the “$100-Million-Dollar Club” of the organization for actively participating in fundraising campaigns totaling over $100 million.

This is the only photo of Vance found in the collection. Vance (right) is being presented with the book The Illustrated Guide to the Collectibles of Coca-Cola by Cecil Munsey. The photo was taken about 1972 when the book was published.

Lynn Vance LILLIE  was the last owner of this collection before it was saved from the trash. I find it quite interesting that the only photograph of him in the collection is one where he is receiving a book on collectibles!