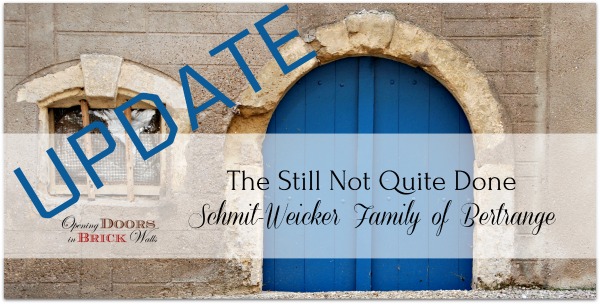 The rewards of blogging are awesome, astounding, astonishing, amazing… those are only the A’s and I could go on and on.

The Missing Marriage Record of the
SCHMIT-WEICKER Couple

Yesterday, less than an hour after I posted the link to 52 Ancestors: #31 The Still Not Quite Done Schmit-Weicker Family of Bertrange on Facebook, my friend Linda* wrote this comment:

I found a marriage that could match in Clemency, 28/08/1810, but I can’t access Family Search, it’s probably too busy. You could check yourself later.

I didn’t wait until later and was able to pull up the record she believed was the marriage of Peter SCHMIT and Margaretha WEICKER.

Five and a half months later, Peter and Margaretha became the parents of their first child Magdalena, my children’s 4th great-grandmother.

One Record Leads to the Next

The marriage record led to the 1785 baptismal record of Anna WEICKERS [sic, Margaretha was not included on this record], daughter of Nicolai WEICKERS and Anna Margaretha HARTMAN.[2] Why didn’t I notice abt. 1795 could not have been her year of birth? She would have been only 16 when her first child was born.

With the names of the parents, I was able to add three generations to the WEICKER line. I had suspected Nicolas WEICKER and Anne Margarethe HARTMANN were the bride’s parents because….

With the names of three new couples in the family tree, I will be busy finding the records to document them and may even be able to add more ancestral names.

Special thanks to my friend Linda for taking the time to read my posts, give me advice, and for telling me where to find the marriage record of Peter SCHMIT and Anne Margaretha WEICKER. *Linda has helped me out several times already. A Latin Rule You May Not Have Known was the result of one of her tips.

Happy Family History Month to all. Wishing you lots of keys to open the doors in your brick walls.