As I’m coming closer to the end of this project of writing about my children’s 5th great-grandparents, I’ve started missing the days when I spent weeks and months working on the all descendants of a brick wall ancestor. The focus on one family a week is taking its toll.

As I write these posts I find myself wanting to go back one generation and then another searching for a common thread which ran through the families. The thrill of adding a new most distant ancestor is still great but I find myself having to set aside the research before I am ready to quit.

With Eva LANSER and Henri CONSBRÜCK, my fourth great-grandparents, I tried to keep from working further however relationships mentioned in records made me seek the answers to questions I had. This led to new ancestor discoveries and several new names in the family tree.

Eva’s parents were married in 1760 and were found on the 1766 census in Echternach with their second son Henri. Their first son named after the paternal grandfather Johann Adam HASTERT had likely died between the time of his birth in 1762 and the 1766 census. After the census six daughters were born, Eva being the 5th, and then finally two more sons. All of these children grew to adulthood except for one daughter who has not been traced. As with the oldest son Johann Adam, her death may not have been recorded in the church register. I have found this to be the case in some parishes where mostly only adult deaths were recorded. Eva’s father worked as a cloth maker (draper) or drapier. None of his sons followed in his steps. 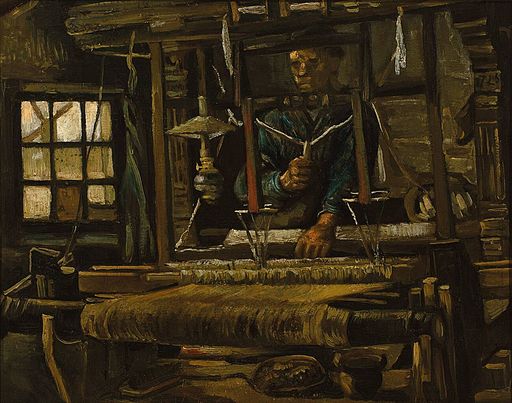 On 20 September 1791, a double marriage took place in the LANSER family. The oldest son Henri and his sister Catherine married the HERR siblings, Anne-Marie and Johann. Their children would later be close to Eva’s small family.

Henri was a cloth maker and I suspect the trade he was proficient in was one of the reasons he and Eva married. Had he been working in Sébastian’s atelier before his death or did he take over the looms only when he married Eva?

Henri CONSBRÜCK was born and baptized on 5 April 1775 in Echternach. He was the oldest of three children born to Johann and Barbara after their marriage in 1773. His sister Anna Maria was born in 1779 and lived only 8 years. He also had a brother Matthias who was born in 1782 and moved away from Echternach to the Trier, Germany, area when he married sometime before 1816.

Present at the marriage of Eva and Henri were both of their mothers as well as four witnesses who were relatives. Eva’s brother Henri LANSER, her brother-in-law Johann HERR, as well as Bernard and Mathias WAMPACH, both “uncles” of the groom.

The relationship of the last two witnesses is still under investigation. Bernard was married to Maria CONSBRÜCK (daughter of Johann Wilhelm CONSBRÜCK and Anna Maria PROMMENSCHENKEL) however her relationship to Henri has not been established. I suspect the relationship given in the marriage record was not that of an uncle as we define it today. This might be a blessing in disguise as so far no connection has been made between my CONSBRÜCK line and the parents of Maria. Further confusion has been caused by my Henri’s grandfather also being a Johann Wilhelm. His grandfather was about the same age, married about the same time, and lived about as long as the other man with the same name and in the same location.

The years after their marriage

Henri and Eva’s first child Barbara was born on 21 February 1806. Two years later Eva’s mother Maria Catharina HASTERT died on 10 March 1808. Her death was reported by her oldest son Henri LANSER who was still working as a messenger.

Eva was pregnant with twins when her mother died. Bernard and Marguerite were born on 2 September 1808. They survived only seven months. Marguerite died on 5 April 1809 and Bernard less than a week later on 11 April 1809.

Little Barbara was nearly four years old when Anna Maria, my third great-grandmother, was born on 4 February 1810 to Eva and Henri. Anna Maria went by Maria to distinguish her from a sister with the same name who would be born later.

Eva’s younger sister Margaretha LANSER was 31 years old when she married the 25 years old Johann SELM (1786-1846) on 9 June 1811. None of the witnesses to the marriage were relatives.

War had overshadowed the CONSBRÜCK and LANSER families since before Eva and Henri’s marriage. The wars may not have been raging in Echternach but the people were still affected. Eva’s youngest brother Peter LANSER joined the corps on 27 frimaire in the year XIV or 18 December 1805.

Peter was presumed to be a prisoner of war in Russia as of 11 October 1812. He was in 108e régiment d’infanterie de ligne with his 1C1R Sébastian LANSER (whose godfather in 1784 had been Peter’s father) and several other young men from the Echternach area. The presumption of his being a prisoner of war probably came about when Napoleon’s army was evacuating Moscow in October following the Battle of Borodino on 7 September 1812, the deadliest day of the Napoleonic Wars. The information on Peter’s being in the military and a possible POW came from the Matricules Napoléoniens 1802-1815 database.

Eva’s second youngest brother Nicolas LANSER was 30 years old when he married Catharina Magdalena JOERG (1790-1847) in September 1813. A date is missing on the marriage record however it must have taken place between the 7th and the 20th as these are the dates on the previous and next records.

Two years later another daughter was named Anna Maria and would be known as Anna. She was born on 8 January 1814.

Eva’s brother Peter had returned from Russia and was living in Echternach on 3 February 1815 when he, a former soldier for the French army, died at the age of 29 years (31 years on the death record). The Napoleonic Wars ended later in the year on 13 September 1815.

Years after the wars

Henri was still working as a cloth maker and was likely hoping to have a son to teach the cloth-making trade to. On 31 March 1816, Eva gave him a son they named Jean. He lived only a few days and died on 3 April 1816.

Henri and Eva named their last child, a daughter born on 4 July 1817, Odile. I suspect the name was important to Eva and the LANSER family members as Eva’s maternal grandmother was named Odilia FUNCK (abt. 1715-1778) and the name continued to be used in the family for several more generations.

Eva and Henri’s family was now made up of four daughters. Not having any sons to pass the trade on to, did his daughters help him with the wool weaving as they grew older? What I do know is that all of the daughters worked as seamstresses, maybe even sewing the cloth made by their father.

Eva’s sister Catherine LANSER died on 15 January 1833 at the age of 60. Her death was reported by her husband Johann HERR.

Sometime before 1835 my third great-grandmother, the daughter known as Maria, went to the city of Metz in France to work. While there she may have met Jean Joseph SCHLOESSER (1807-1841) of Vianden. He was the son of Jean-Népomucène SCHLOESSER and Margaretha TRAUDT. The young couple married in Metz on 17 November 1835. During the next six years, Maria gave birth to four daughters, the only grandchildren of Eva and Henri. Maria’s husband Jean Joseph died in Metz on 25 November 1841. Their oldest daughter likely died before 1843 as she was not found in the census with her three sisters. A death record for Madelaine was not found in Metz or in Echternach. This makes me wonder if she may have died while the family was traveling from Metz back to Echternach.

The extended family in the census

In 1843 Henri was the head of a household with his wife, his daughter Barbara and his three SCHLOESSER granddaughters. His daughters Maria, Odile, and Anna are missing and were likely working someplace other than Echternach. Henri’s occupation on the 1843 census was wool weaver (fileur de laine).

In 1846 he was again seen as a cloth maker (drapier). As in 1843 his daughter Barbara and the grandchildren were with Henri and Eva in 1846. Maria, the mother of the grandchildren, may be in the household but listed as single. It is also possible that the entry is her sister Anna Maria who usually went by Anna. Using their full names on official documents caused problems like this.

In 1847 the entire family group is listed: Henri and Eva with their four daughters and three granddaughters. The two younger daughters Anna Maria (Anna) and Odile are listed as absent and working as servants in France. Henri was now seen as a laborer and his daughters Barbara and Maria did not appear to be working.

In 1849 Henri may have not been well or had given up his cloth making. He was listed as having no occupation. However, his three single daughters are listed as seamstresses. Along with his wife Eva, there were two more young ladies in the household. They were Eva’s nieces Eve and Catherine HERR who were also working as seamstresses. His widowed daughter Maria and her three daughters were living in their own household.

More deaths in the family

Henri CONSBRÜCK died on 22 May 1850 in Echternach at the age of 75. His death was reported by his nephew Johann HERR, the youngest son of Eva’s sister Catherine.

Eva’s only living sibling Margaretha LANSER died on 9 March 1852 at the age of 71. Eva LANSER was now the only person left from her generation. She lived a decade longer.

Shortly before her death all of her daughters and granddaughters were living with her when the census was taken on 3 December 1861. Eva LANSER died three months later on 19 March 1862 at the age of 84 years. Her death was reported by her nephews Peter LANSER and Johann HERR.

Eva’s three single daughters Barbara, Anne, and Odile continued to work as seamstresses as did her widowed daughter Maria. The four sisters continued to live and most likely work together in their home in the rue de Luxembourg.

Eight years after the death of their mother Eva, the sisters lost their oldest sibling Barbara. She died on 2 November 1870 at the age of 64. Johann HERR, her cousin, and Heinrich DIESCHBOURG, a neighbor and tailor, were the informants for her death.

The remaining three sisters lived two more decades. Odile, the youngest, died on 17 July 1890 at the age of 73. Two years later Anna died on 2 March 1892 at the age of 78. Both of their deaths were reported by their sister Maria’s son-in-law Dyonisius Johann Peter MAAS.

My third great-grandmother Anna Maria “Maria” CONSBRÜCK was the last of the seamstress sisters. She died on 29 September 1897 at the age of 87 years. Her death was also reported by her son-in-law. Maria born in 1810 left a mystery which took me two decades to solve.

Henri CONSBRÜCK and Eva LANSER came from large families but only one of their daughters married and had children. Of the four grandchildren, three grew to adulthood but only two married. The name Odile was passed on to this generation to my 2nd great-grandmother Odile Lucie SCHLOESSER and to her granddaughter, my grand-aunt, Odile Lucie FOURNELLE.