When I opened up my genealogy program to gather material on my 5th great-grandparents Jean MAJERUS and Magretha BREGER for a new post it looked like I wouldn’t be writing a very detailed one about them. Everything I had had already been used when I wrote about their son Jean Baptiste MAJERUS in January last year. I had little information about his parents. In fact, I had only located the baptismal record for Margretha BREGER with the names of her parents the day before I posted. I added their names to a screenshot I’d made to illustrate a knothole in the fence.

Over a year later, the tree was still pretty bare. Margretha’s parents’ names had been added but without dates or places.

Jean MAJERUS’ parentage was still unknown. There are discrepancies concerning his place of birth. On the census taken from 1843 to 1852, he had been listed as born in Luxembourg or France. The places in France were not found on a map and likely misspelled. The last census he was enumerated in had Felz, also known as Larochette, in Luxembourg. This was the place his 24 years old grandson gave when he declared the death of his 87 years old grandfather, Jean MAJERUS.

No marriage record was found in Luxembourg for Jean MAJERUS and Margretha BREGER. A record which would include his birth date and place, his parents’ names and location if living or dates of death if deceased.

I didn’t let the lack of information on Jean MAJERUS stop me from continuing my research with his wife Margretha and her parents.

Before I began with a time-consuming search for siblings in the church records of Saint Michel where Margretha was born, I checked the marriage database on Luxracines to see if I could locate a date of marriage for her parents. I needed to know when they would be having children and if they were married in the same church their daughter was baptized or if their marriage even took place in Luxembourg City. While Jean and Margretha’s marriage date was not found in either the church or civil marriage databases, I found her parents married on 20 April 1758 in the Saint Jean parish in Luxembourg City. 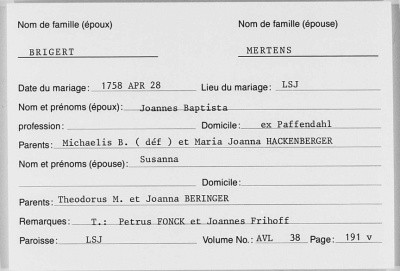 I can’t keep this wonderful discovery a secret!

This is what I found when I checked the first:

An alphabetical and chronological index of births in the parishes and garrison of the city of Luxembourg for the years 1601-1796 with over 710 images of double pages in the book. The second was the same but for marriages and deaths (nearly 500 images). The same two collections were found under Luxembourg, Saint Michel; Luxembourg, Saint-Ulrich; and Chapelle de la Garnison, Luxembourg. The information at the front of the collections has a key for the abbreviations used for the parishes and gives credit to a Mr. Weyer, secretary, for making this inventory of the baptismal, marriage, and death records. Each entry includes the name, date of event, parish, and page of the parish book making it easy to find the actual record in the collections for these parishes.

Using this NEW index I found the names and records for both sets of grandparents of Margretha BREGER, one set of great-grandparents, the name of a great-great-grandparent, and children of several of these marriages. My Ancestor Score is increasing!

How many of the researchers for Luxembourg who follow my blog knew about this amazing compilation of births, marriages, and deaths from the church records of the city of Luxembourg? Two books with a total of over 2,400 pages of names, dates, and page numbers for records from 1601 to 1796. Did I discover something everyone was already using or is this also new to you?

I was so excited and motivated after adding generations to Margretha that I began looking for a way to find more information on her husband Jean MAJERUS. Did you hear that wall come crashing down? I’ll tell you about it in my next post.