In the twenty-four years of doing genealogy I’ve learned to not take other researchers’ information for granted without retracing their work. I knew this fairly early on and when reviewing my database I still find branches of the family tree which need pruning and a bit or a lot of support.

For the CLONCH line I relied heavily on Ralph Hayes’ genealogy work as a guide. I gave him credit for information I quoted and was not able to corroborate through my own research. In time I was able to confirm much of his work but questions have remained.

One of these was the parentage of Dennis CLONCH, a twelve years old boy living in the same household as Nancy CLONCH, widow of Dennis CLAUNCH (spelling of the surname changed after his death). Someone at some time thought his parents were John CLONCH and Elizabeth DOSS. In a timeline frame this just didn’t work for me.

It is my belief he was the son of John’s brother William CLONCH and his wife Ann Eliza HILL. Dennis CLONCH aka Dennis HILL was not mentioned in the will of William CLONCH which may have lead an earlier researcher to assume he was the son of John CLONCH, John being the only other known male CLONCH in the area during this time period. The CLONCH families in Mason County, West Virginia, were all descendants of Dennis CLAUNCH and Nancy BEASLEY through their sons, William CLONCH and John CLONCH. They also had two daughters whose children passed on the husbands’ surnames, not the CLONCH name.

In my last two posts Difficulty Getting Around the Hill and Here We Go Dancing ’round the Hill I discussed the paper trail I found which supports my assumption that Dennis CLONCH and Dennis HILL were the same person.

When I shared Difficulty Getting Around the Hill with Ralph I wondered if he knew what I planned for this post when he replied:

Actually this Dennis was the son of the milkman.

How does DNA fit into the picture?

When I received the results of my brother’s DNA test at Ancestry I first looked at the closest matches. I searched for surname matches. Nothing new showed up so I began looking deeper into the more distant matches to help with some of my brick walls.

One of my brick walls is John COOLEY b. 1827 in Missouri. During this period of time ALL of my American ancestors were in Old Virginia. I searched for matches with ancestors in Missouri and found a match in the Distant Cousin range with the Missouri location but not for the COOLEY surname. You get the gist of this. I was all over the place, grasping at straws.

Although I wouldn’t suggest this method of searching through DNA results, it turned up, by accident or coincidence, a match with R.S., an Ancestry member with a small tree of 15 people. In the tree was R.S.’s great-grandfather Albert Henry HILL born 11 September 1876 in Missouri. He did not have parents but the year and place of birth was a match for Albert seen in Dennis HILL’s household in Saline County, Missouri, in 1880. This was before I began going over the HILL (line), before I wrote The Mysterious Ann Eliza HILL, wife of William CLONCH, and the two posts which followed.

Is the date of birth seen in the Dennis Hill family Bible enough proof?

If R.S.’s Albert Henry HILL was the son of Dennis HILL and Dennis was the son of my 3rd great-grandfather William CLONCH, then R.S. and my brother would be (half) 4th cousins (being descendants of William’s two relationships). The 6.5 cMs shared DNA (across 1 segment) fits in the relationship range fourth cousins once removed or third cousins three times removed. I know less than 7 cMs is not considered reliable – only about 5% of  matches in this area may have a common ancestor. R.S. has no shared matches with any of my brother’s matches. I was stumped until I learned Ancestry does not show shared matches for persons who share at the Distant Cousin level. They only show shared matches up to fourth cousins. 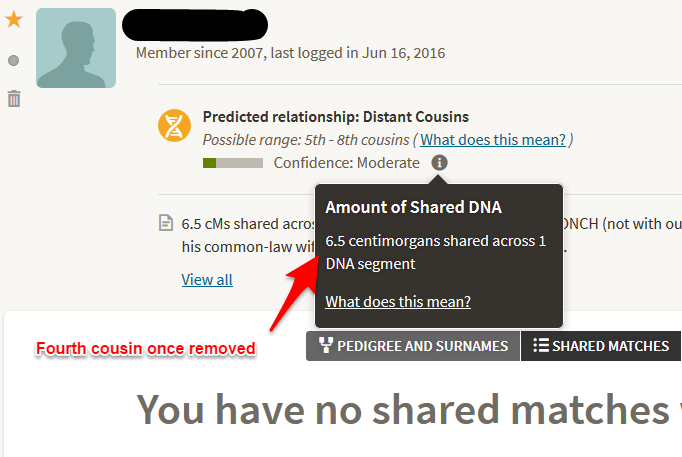 There are at least a dozen people who descend from Dennis CLAUNCH and Nancy BEASLEY who have tested and have matches with my brother. I need to:

When my brother’s DNA results came in I waited a few weeks before I began reaching out to his matches. R.S. quickly replied but was a bit wary of my theory pertaining to his Albert Henry HILL being the son of Dennis HILL aka Dennis CLONCH. I fully understood his hesitation to not accept everything I was telling him as fact. Our contact is touch and go. Ancestry messaging from the DNA page didn’t work. My email provider was blocked by his and I had to use a different email account. His computer was fried and had to be rebuilt.

While trying to keep in touch with R.S. I began checking out the CLONCH matches. Some I messaged back in June and others this past week. So far only one person has gotten back to me. Since I have done a lot of reverse genealogy for the CLONCH line I already had many of the matches’ lines at least partly documented. These are the ones who had trees or who I recognized.

Since making contact with the matches is taking longer than I expected it may be a while before we can test Ralph’s (just joking) theory about Dennis being the son of the milkman. Or even begin thinking about DNA giving us proof Dennis HILL was the son of William CLONCH and Ann Eliza HILL or the son of Ann Eliza HILL and another man or the son of an unknown child of Dennis CLAUNCH and Nancy BEASLEY.

It’s a bit frustrating to have to wait but I’m going to look on the bright side. While working on the paper trail for Ann Eliza HILL and Dennis HILL, I found a bible transcription and an obituary, and located the married children of Dennis HILL. I don’t give up easily when doing genealogy research. In this case finding a living descendant of Dennis’ son Albert  – with a DNA match to my brother – pushed me find more or was it genetic memory?

Will DNA help in getting around the Hill? I’ll keep you posted on any new developments.

In mid-March I received this message from one of my siblings:

Just wanted to let you know that I ordered a DNA kit from ancestry.com. I will send you the results when I get them. Hopefully it will be useful in your research.

When his results came in late May he sent me this message and screenshot:

Hope this doesn’t mess up your research too much.

I thought he was holding out on me, waiting to let me know only after he came to visit for Mom’s 80th birthday. But the results truly did not come in until the early morning of the day he was to arrive in Luxembourg.

He turned administration over to me as he thought I would know better what to do with the test results as he does not do genealogy.

I haven’t done DNA testing but my second cousin Laura [daughter of Geraldine Dempsey Workman (1931-2007) – the first person I know of who worked on our family tree] shared her DNA page with me earlier this year. Since Laura and I share great-grandparents (William Henderson DEMPSEY and Laura Belle INGRAM) 3/4 of her matches did not have anything to do with our common line. It, however, helped me to get a feel for Ancestry’s DNA page before my brother’s results came in.

The ethnicity results (above) of 100% European were to be expected although it blew the theory of a Native American connection right out of the water. Or so I thought. Where do the 10% Italy/Greece fit into our family tree?

After a week or so of trying to figure out some kind of system to work through the matches on Ancestry, I decided to download the raw DNA data and upload it to GEDmatch. After the kit was tokenized and while I was waiting for the batch processing to complete I did a heritage test.

1.43% Native American DNA for my brother. I understand he got about 50% of his DNA from our father and 50% from our mother (European). Family tradition is the NA connection is through our paternal grandmother Myrtle Hazel ROOP‘s mother Rebecca Jane CLONCH. If I keep doubling the percentage (which may not be scientifically correct) I get 91.52% at the 4th great-grandparent level. Dennis CLAUNCH and Nancy BEASLEY are the only known set. Another ancestor at this level was Levina DOSS who had her children with an unknown man. The unknowns are COOLEYs and TREADWAYs.

I admit this was just a game I was playing before I begin to get serious about using the DNA results for research purposes. But who knows, maybe I’m on the right track.

Oh yes, Laura and my brother are “predicted 2nd cousins” and share 381 centimorgans across 15 DNA segments.