After publishing last week’s post, several of my readers left comments which led to the necessity to re-think my post and write an update.

The Identity of the Man in the Photograph

As my Mother would say “I swanee” that looks like Quincy Royalty as a young adult. Referring to the portrait taken in Kansas as well. His hair being parted on the other side might be an image reversal, but it sure looks like him.

Joe had me comparing the photo of young John Quincy Royalty (1866-1918) and checking his timeline. The photo on the left is a flipped closeup of John as Joe thought one of the two images may have been a reversed image.

Using the similarity meter on PicTriev, I compared the above two pictures and got 78% similarity. This is more or less the same results I obtained using PicMonkey’s fade tool to compare the two overlapping photos. This was not as easy as it appears as the angle to the camera was not the same in the two photos. The positions of the mouth, nose, eyes and hairline are close matches.

The light looking eyes of the couple in the photo made me wonder if the soft tones were showing the true appearance of the couple. Quincy’s eyes appear much darker. If there was an image reversal, it would more likely be the couple photo as Quincy has his part on the same side when photographed in Kansas and in New Mexico.

The Identity of the Woman in the Photograph

Last week I wondered if the woman may have been the same person as the young girl on the left in this photo. The similarity meter showed 42% resemblance. Vera Marie Badertscher of Ancestors in Aprons explained this better than I could.

I don’t see the resemblance to Irene. Although we can only see one ear in the younger lady, it sticks out slightly, and the woman in the top photo has small, flat-to-the-head ears. The mouth of the younger girl doesn’t look wide enough, either.

Vera brought up some good points about the younger girl and the woman not resembling each other. She also wrote:

I was really struck by what a sweet-looking young man that is. Worth tracking down. Is there a history of that county of Kansas in the late 1800’s-early 1900’s? The young man looks younger than the woman to me. She could almost be his mother.

As mentioned above, Joe thought the man may be John Quincy Royalty. He was a schoolteacher in Kansas before 1900 and there is no known marriage for him. His mother died about 1874 and his stepmother died in 1892 at the age of 62 so Vera’s theory of a mother and her son wouldn’t work.

Quincy had three sisters who were living around this time. Tillie, Florence, and Olive. The three were married by 1892. Could one of them have traveled to Kansas and had her photo taken with him? Could the photograph have been taken earlier? I used the similarity meter on PicTriev to compare the young woman with Quincy’s sisters.

The similarity meter on PicTriev came up with a 93% match on the young woman and Tillie and same person for the identity. The photo of Tillie (bottom) was taken about 1895. Are they the same woman?

One last thought, is the brooch worn by Tillie above the same as the one worn by the unknown woman on the left? I got out both of my magnifying glasses and had a closer look. They are not the same. The unknown woman’s brooch looks almost like letters and Tillie’s is a bit larger.

Are the unknown man and woman, brother and sister? Could they be John Quincy and Mathilda J. “Tillie” ROYALTY?

Luanne Castle of The Family Kalamazoo made some interesting comments about the man’s collar or lack of collar.

So interesting that he wears no collar in that first pic! Would it be because he couldn’t afford a new collar and his old one was ruined or lost or something?

I thought it was more of a trend to not wear the collar.

Hmm, maybe .. . . But I know it was hard for men to get collars sometimes. They always had to budget for them.

Comments like these make me want to learn more about vintage photography and fashion of the times. Luanne has a wonderful collection of old photographs and postcards on her blog. I need to take another (closer) look at hers and mine. You see things differently when you become more interested in learning about them.

This photograph of an unidentified couple measures 6 1/2″ x 4 1/4″. The rich soft tones of the image are marred by a stain on the right side of the picture. At first, I thought a top layer had been scratched off of the photo. The original shows this is actually a piece of paper stuck to the picture. Very likely another photograph stuck to this one when the water damage happened. 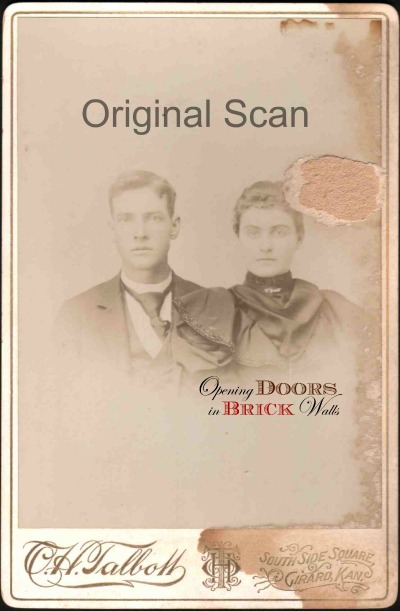 The front includes the photographer’s name and location in golden artistic print common around 1882-1900. The rounded corner and single line border dates this cabinet card to the 1889–1896 period. The photo was glued to a light cream colored heavy card stock and there is no writing or printing on the back.

The collar of the man’s shirt is a low band without an actual collar. His tie has a large knot and is tucked to the side as was the style in the late 19th century. His hair is cut short and neat.

The woman’s dress has a high neckline with lace, leg-of-mutton sleeves, and a wide cape-like collar bordered with black venitian lace similar to that around the neck. A pin is attached to the middle of the high neck of her blouse. Her face is framed in tiny ringlets instead of bangs while the rest of her hair appears to be put up in a bun at the back of her head.

O. H. Talbott who had his business in Girard, Kansas, worked as a photographer from 1894 (or perhaps earlier) until just before 1910. No information was found for a photographer of this name. To place his occupation in Girard during a certain time period I had to draw up a short biographical sketch from information found in census records and his children’s records.

Since this sketch points to O.H. Talbott doing business in Girard, Kansas, in January 1894 and until August of the same year, I wonder if his business in the town may not have gotten off to a good start. Paola is 73 miles north of Girard and I do not believe Othniel would have commuted to work. It is more than likely his business in Girard was short lived and this photograph may be one of very few, if any, which survives. 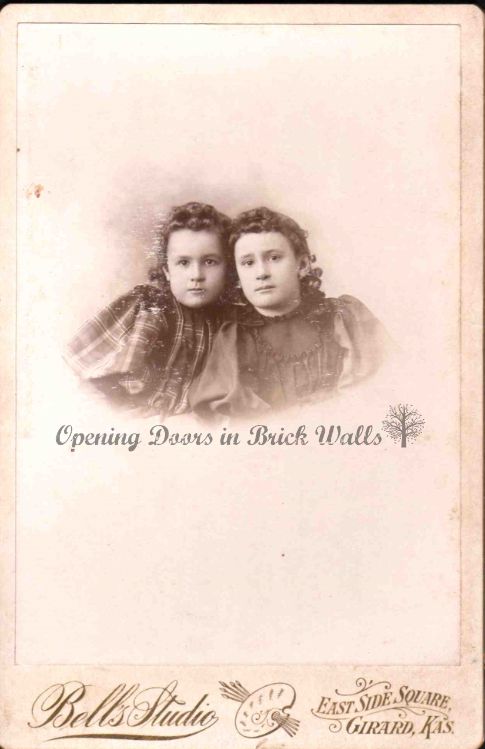 There is another photograph in this collection which was taken in Girard at Bell’s Studio in the early 1880s. It was featured in Old Photographs Saved From Trash Can ~ #18 Olive ROYALTY 1871-1949 and shows a young Olive (right) and another girl who was only identified as Irene (left). How Olive came to be in Girard to have her portrait taken with Irene is unknown. Could Olive’s friend Irene be a younger version of this young woman with the man? When comparing the two photographs the difference in the color of the eyes stands out. Could the soft tones of the photo taken by Talbott cause the young woman’s eyes to appear lighter? Can a resemblance be found between the young woman and Irene?