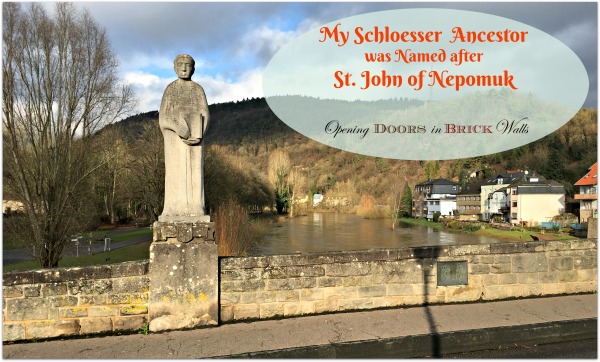 A statue from about 1740 of Saint Jean-Népomucène can be found in the interior of the Saint-Nicolas church in Vianden, Luxembourg. A copy of the statue has been on the picturesque bridge over the Our River in Vianden since 1865. The people of Vianden have given him a bizarre but kind name, a phonetic deformation of “pomucène” – Bommenzënnes.  In Echternach, he watched over the banks of the Sauer River until the bridge and his statue were destroyed in 1944 during World War II.

After the new bridge was built the statue was replaced by a replica as seen in my title photo which shows the Sauer River flooding its banks this week.

Saint John of Nepomuk (c. 1345 – March 20, 1393) is the saint of Bohemia (Czech Republic) who was drowned in the Vltava (Moldau) River at the command of King Wenzel IV (Wenceslaus), King of the Romans and King of Bohemia. Historically John of Pomuk, a small market town later renamed Nepomuk, was drowned in 1393 on the orders of King Wenzel because of disagreements over church politics. Later accounts state that he was the confessor of Queen Johanna of Bohemia and refused to divulge the secrets of the confessional despite threats and torture. On the basis of this account, John of Nepomuk is considered the first martyr of the Seal of the Confessional, a patron against slander and, because of the manner of his death, a protector from floods and drowning. He was canonized in 1729 by Pope Benedict XII. 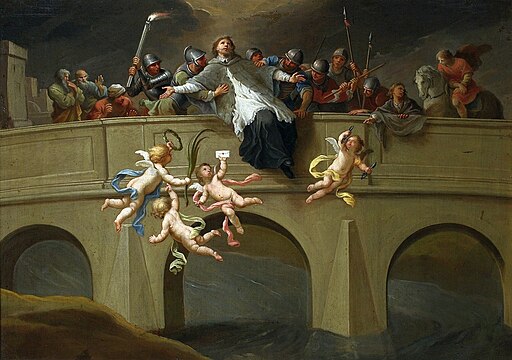 I found it interesting that my fourth great-grandfather Jean-Népomucène SCHLOESSER had the same first name as the saint who shares the honor of being the protector from floods and drowning with Saint Nicolas in Vianden. He was born and raised in Wiltz but Vianden was the town where he later married and raised his family.

Jean-Népomucène SCHLOESSER, the son of Joseph SCHLOESSER (1729-1800) and Catherine ARENDT (1730-1796), was born on 18 March 1764 in Wiltz. He was the sixth of ten children. Three of his siblings, the oldest and two youngest, died within a few days or months of their births. All others lived into their sixties and seventies except for one brother who died at the age of 44. His parents were both still living when Jean-Népomucène married Margaretha TRAUDT on 26 April 1790 in Vianden.

Margaretha TRAUDT, the daughter of Nicolas TRAUDT and Barbe BILL, was born on 8 August 1766 in Vianden. She was the youngest of nine children. Several of her siblings are known to have lived to adulthood and marry. They may have grown up with a step-mother as Barbe BILL died on 18 May 1769 in Vianden when her youngest was only a little over two and a half years old. A widower named Nicolas TRAUDT married Barbara KÖNY on 1 October 1769 in Vianden. More research is needed to determine if this marriage was the second marriage for Margaretha’s father.

Jean-Népomucène SCHLOESSER and Margaretha TRAUDT were the parents of a dozen children born between 1791 and 1809 in Vianden. The father of these children worked as a nailsmith or Nagelschmied to support his family. 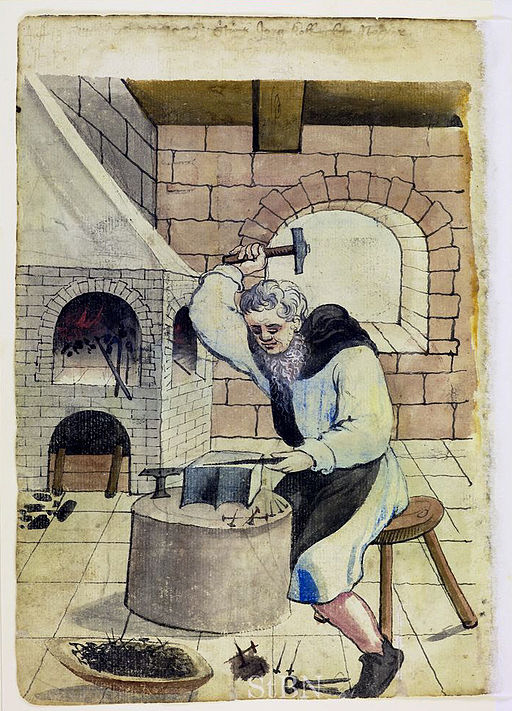 His wife Margaretha died 30 November 1809 at the age of 43 years, the day after giving birth to her last child. The children were:

Jean-Népomucène waited a full year before he remarried. The bride, Elisabetha HAMELING, was fifteen years younger than the groom when they married on Christmas Eve in 1810. She gave him two children. Laurent was born on 12 August 1812 and Gregorius on 9 February 1815. The second son lived only a little more than six weeks dying on 27 March 1815.

Ten years after his marriage to Elisabetha the SCHLOESSER children were growing and the banns were being published for the first marriages.

Gregorius SCHLOESSER, likely the oldest living son at the time, married Marguerite HACK (1794-1821) on 11 April 1820 in Clervaux. His younger brother Johann was one of the witnesses to his marriage.

Maria Magdalena SCHLOESSER, the oldest daughter, married Mathias COLLING (1793-1846) on 24 February 1824 in Vianden. Her brother Johann Peter SCHLOESSER was a witness to her marriage.

Gregorius’ wife died on 5 September 1821 and he waited four years before he married again. Marguerite ALFF (1797-1853) was his bride and they married on 21 December 1825 in Clervaux. His brother Johann Peter of Vianden was a witness.

Jean-Népomucène SCHLOESSER died on 29 July 1833 in Vianden. He was 69 years old and still working as a nailsmith or cloutier as this old profession was known in French. The informant on his death record was his youngest son Laurent from his second marriage who was 21 years old.

Jean-Népomucène’s death left my third great-grandfather without parents to give consent to the marriage he planned two years later.  Jean Joseph SCHLOESSER was 28 years old when he married my third great-grandmother Anna Maria CONSBRÜCK (1810-1897) on 17 November 1835 in Metz, Department Moselle, in France. She was 25 and from Echternach.

When I wrote 52 Ancestors: #47 The SCHLOESSER-CONSBRÜCK Family the civil records for the city of Metz were not available online. I had found their date of marriage and the dates of birth of their four daughters in the 10-year lists (Tables décennales) but did not have copies of the records. While writing this I realized it had been two years and the archives for the municipality should by now have the civil records online. [insert Happy Dance here]

I now have the digital copies of all five records but, due to terms and conditions, I cannot share images of them on my blog without getting special permission. What I can do is share the link to the Schloesser-Consbruèck marriage record for viewing:

From the record I learned, when presenting his paperwork to marry, Jean Joseph gave the name of his father as Jean SCHLOESSER. A copy of the death record of the father of the groom was presented as evidence. This caused a problem as the name on the death record was Jean-Népomucène and not Jean. Jean Joseph was then required to present the death records of his grandparents since his parents were deceased and there was a doubt the death record was for the correct person. Jean Joseph swore under oath that he did not know the dates of death or place of death for his grandparents and would not be able to obtain the records. He also presented a certificate from the commune of Vianden which stated he was able to enter into a contract of marriage with the person he had chosen according to the law.

His bride Anna Maria presented a notarized document giving parental permission to marry. Her parents were not present at the marriage as they were living in Echternach. On the marriage record as well as on the birth records the first three daughters, Anna Maria’s place of birth was seen as Etternach (Belgium). On the birth record of the youngest daughter, the mother Anna Maria’s place of birth was correctly given as Echternach in the Grand Duchy of Luxembourg. It shows the importance of finding all records to document a family group. Without all information, I may have disregarded the documents with the incorrect place of birth for Anna Maria.

The youngest son and only living child from Jean-Népomucène’s second marriage, Laurent married Anne-Marie FRIEDERICH (1812-1867) on 10 July 1838 in Beaufort, near Echternach. Laurent’s mother Elisabetha HAMELING was present and consenting to the marriage.

Deaths in the family

Five months after she attended the wedding of her only living child, Elisabeth HAMELING, the widow of Jean-Népomucène SCHLOESSER, died in Beaufort on 14 December 1838. She had been living with her son Laurent and his wife following their marriage.

My third great-grandfather Jean Joseph SCHLOESSER died on 25 November 1841 in Metz. He was only 34 years old and had worked as a locksmith or serrurier. In German, this occupation is Schlosser with Schlösser or Schloesser being the plural form. Schlösser also translates to castles. Jean Joseph’s widow and daughters returned to Echternach where Anna Maria continued to make a living as a seamstress.

In 1864 the last two known living SCHLOESSER children were Johann and his half-brother Laurent. Johann died at the age of 64 in Echternach on 6 April 1864; his deceased wife’s nephew was the informant. They likely did not have children as his wife had been 45 years old when they married. The baby of the family, Laurent died at the age of 51 in Beaufort on 31 May 1864; his son-in-law was the informant.

Jean-Népomucène’s SCHLOESSER family was large and he came from at least two generations of large families. Documenting these families was made a lot easier by using the research of my 6C1R Joseph SCHLOESSER, a direct male descendant of Nicolas SCHLOESSER and Jeanette GASPERSCH, the grandparents of my  Jean-Népomucène, as a guide. Villmols merci, Jos.

Sources: I’m taking the easy way out again this week. I’ll be uploading my updated GEDCOM file to RootsWeb. All sources have been found and can be referred to by clicking on the names in the box below.