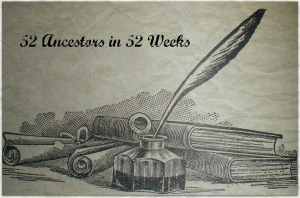 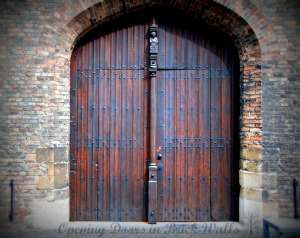 John COOLEY is the second brick wall in my series of posts for the 52 Ancestors in 52 Weeks. I’ve walked the full length of this brick wall searching for a door that will get me to the other side.

A small window that allows me to take a peek at what may be on the other side of this brick wall was created by Michael COOLEY, owner and administrator of Michael Cooley’s Genealogy Pages.

Michael and members of the John Cooley Mailing List work on finding information on the early American COOLEY lines and finding male descendants who are willing to take the Y-DNA test to prove the connections. Although emphasis is on the male line, members may opt to discuss a female line to get around road blocks.

My John COOLEY has been included in the list of Patrilineal Descendants of John COOLEY (ca.1740-1811) of Stokes County, North Carolina.  His line is “greyed out” as the assumed connection has not been proven. I shared information on living male descendants with Michael and hope at least one will take the Y-DNA test and be included on the Y-DNA Signatures of Early American Cooleys.

This Side of the Brick Wall

My 3rd great-grandfather John COOLEY was born in October 1827 in Missouri. I don’t know who his parents were. What I do know is that they, or at least his mother, had to be in Missouri in late 1827 [per 1900 census] when John was born.

The earliest record found for John was for his marriage in Meigs County, Ohio, in 1851.

John COOLEY married Sarah Ann TREADWELL on Tuesday the 9th of September 1851 in Meigs County, Ohio. They were married by H. S. Lawrence, Justice of the Peace. The bride’s maiden name is most likely not correct.

There are several reasons for this belief:

John was not located in the 1850 census. It is not known if he left Missouri soon after his birth or only just before he married Sarah. He could have lived anywhere between the time of his birth in 1827 and his marriage in 1851.

In 1853 John and his wife Sarah were living in Parkersburg, Wood County, (West) Virginia, when their first child Calvin was born. John’s occupation was listed as sawyer on his son’s entry in the birth register.

Daughter Melissa F. was born about 1855 in Cedarville, Ohio, according to her death certificate. Was this Cedarville in Greene County or Cedarville (historical) in Clinton, County? If this is reliable, Melissa may have been born while John and his little family were on their way west to Missouri. Was he going back to be with his family?

By 1860 John, a laborer, had moved his family to Lexington, Lafayette County, Missouri. John, Sarah, and their children Calvin, Melissa (seen below as Lucy), and Harrison, age omitted, are living in the boarding house of Frederick and Elizabeth King, immigrants from Germany. Young Harrison was born in Missouri.

They did not remain in Missouri for long as they were back in Ohio when my 2nd great-grandmother Tabitha Ann “Tobitha” COOLEY was born on 11 February 1861.

After Tobitha’s birth John was moving his family back and forth between Mason County, West Virginia, and Meigs County, Ohio. Or at least it appears this way when comparing the places of births of the children on the census. Sallie b. 1865 and Robert b. abt. 1868 are seen as born in West Virginia on the 1870 census when the family was living in Meigs County, Ohio. Ida, who was born in April before the census, was found in the Meigs birth register. Harrison, who was the youngest member of the family in 1860, appears to have died before the 1870 census. John, as a sawyer in 1853, is once again working in a sawmill in 1870.

John’s oldest children began to marry in the early 1870s giving us an idea of when the move to Mason County may have become more permanent. Daughter Melissa F. “Lucy” COOLEY married Henry Hartman BIRD (1833-1900) on 19 March 1871 in Meigs County, Ohio. Son Calvin COOLEY married Mary MacNeal CAMDEN (1855-1931) on 14 November 1872 in Mason County, West Virginia. Both of these children are seen as residents of the county they married in. The move to Mason most likely was between March 1871 and November 1872.

After coming to Mason County two more children were born: Minnie O. on 3 May 1873 in Arbuckle District and Timothy on 6 June 1876 in Hannan District. Even with six children in his household in 1880 John “adopted” two young children whose mother was born in Missouri. Was their mother a sister, niece or cousin of John COOLEY?

Tabitha Ann “Tobitha” COOLEY married Alexander CLONCH (1842-1910) on Thursday the 19th of August 1880 in Gallipolis, Gallia County, Ohio. The day after their marriage, in Mason County, “a heavy storm of wind, rain, and lightning, came up. The rain poured down in torrents, with flash after flash of lightning and peal after peal of thunder. It was a fearful afternoon and got so dark that lamps had to be lighted in the business rooms. During the time the lightning struck the Court House at the extreme point of the cupula, and descending the lightning rod jumped from it to the metallic roof, and from there to the spouting, clearing away about one half of the spouting on the east side of the house, following the spouting along until it again came in contact with the rod, when the fluid passed on down the rod into the ground. The rod is probably what saved the building.”[1] What a dramatic day after the marriage of my 2nd great-grandparents. It must have been a good omen as the marriage lasted 30 years, until the death of Alex at age 68. And to think that five months earlier Alex’s marriage to his first wife had been dissolved at that same Court House.

Unfortunately, not all news was good news during these times. John and Sarah’s 14 years old son Robert Ulysses S. Grant COOLEY died of typho-malarial fever on 2 November 1882 in Arbuckle District. Malarial fever was prevalent in the area at the time. The parents may have been ill or caring for others in the family as one of Robert’s sisters gave the information on his death. This may have been one of the older married sisters as Ida and Minnie were 10 and 8 years old at the time.

John and his son Calvin had some bad luck with horses in the 1884-1885. Calvin lost one of his team horses in June 1884. It had “died from scours, supposed to be caused from eating some weed that has made its appearance in our pastures, and of which considerable complaint is being made.”[2] In February of 1885 John’s horse fell on the ice on Nine Mile creek and hurt itself so badly it had to be killed.[3]

John’s son Timothy COOLEY married Lilly E. CROOKSHANK (1879-1961) on 19 September 1897 in Clay County, West Virginia. Most likely the COOLEYs and the CLONCHs moved to that county about the same time.

John and Sarah lost a daughter Melissa F. “Lucy” BIRD who died on 23 March 1898 in Bashan, Meigs County, Ohio. This was also about the time that the COOLEYs and the CLONCHs moved to the Dixie/Belva area of Fayette County, West Virginia.

At first glance the census listing for 1900 was overlooked as the surname was misspelled and John and his parents’ places of birth were seen as Mississippi instead of Missouri. A marriage record for John’s youngest daughter Minnie O. COOLEY helped to make the connection. Minnie married George WILSON (1849-aft. 1900) on 8 March 1900. She did not live long enough to be enumerated on the 1900 census but her widowed husband and a daughter from a previous relationship are seen living with John and Sarah COOLEY (misspelled Cowley) in Belva.

John and his wife Sarah were in their early 70s in 1900. Calvin, Tobitha, Sallie and Timothy were the only children remaining. No record has been found of their daughter Ida born in 1870 and last seen in 1880.

John and his wife were not found in the 1910 census. It is very likely that they passed away during the decade as they were getting on in age. I would have liked to have found a death record for John COOLEY with the names of his parents listed on it but that was not to be. By the end of 1913 only daughter Sallie WAUGH was still living.