This photograph was printed by D. K. Walton in Rising Sun, Indiana. The photographer Daniel K. Walton was born about 1852 and was first seen with the occupation of photographer on the 1880 census at the age of 28.

Could this be a reproduction of a photograph taken in the 1840s? The stand up collar touching the cheek and the large wraparound bow tie suggest this period. The back of the photograph identifies the man as John ROYALTY.

John and his little family may have lived in Washington County, Kentucky in 1830. A census record was found in the county which “fits” and includes an additional older woman. If this is the correct family group, John would have been a bit younger than his wife. The family hasn’t been found in the 1840 census and John may have died before 1850. His wife Sarah was found in the 1850, 1860, and 1870 census, years in which the status of a person was not included, and may have been widowed as John was not present.

If John ROYALTY named his first son after his father-in-law, were his daughters named after his mother-in-law and mother?

Getting back to the photograph, John’s oldest daughter Ellen lived in Rising Sun, Ohio County, Indiana, at the same time as the photographer D. K. Walton. Could she have had an earlier photo of her father reproduced?

About 1890-1891 the young family of Dr. James A. CROW and his wife Anna Mae HODGE posed for a photograph with their young son William Jacob HODGE in Golconda, Pope County, Illinois, at the Alt studio.

James of Massac County and Anna of Pope County, married about 1889. Their first child Willie was born on 28 January 1890 in Kentucky.

About 1909 Anna wrote on the back of a photograph of herself with her husband and two daughters: 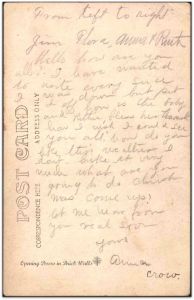 From left to right
Jim, Flora, Anna & Ruth
Hello how are you all? I have wanted
to write every (sic) since I was down but put
it off. How is the baby and Ruthie, bless her
heart. How I wish I could see you all. How do
you like this weather. I don’t like it very much.
What are you going to do Christmas.
Come up! Let me hear from you real soon.
Yours, Anna Crow

The photograph is not dated and Anna did not write the name of the person she was writing the note to. From the text I believe it was taken most likely in 1909 and was for Florence ROYALTY. My only doubt comes from Anna’s writing, “since I was down” and “come up.” Florence lived in the Jefferson District of Pope County and Anna lived southwest of her in Benton, Massac County. Did she mean it literally as in coming to a higher place from a lower place? Or did Anna consider Pope County as “down home?”

Samuel’s mother Sarah ROYALTY née LUNDERMON and Johanna PADDOCK, who four years later would marry the widowed Samuel, were living with the HODGE family. Samuel L. ROYALTY came from Indiana to Pope County after the Civil War and before 1866.  His mother may have come with his family to Illinois while his sisters remained in Indiana. Johanna PADDOCK, an “old maid” and first cousin of Samuel’s wife Joanna PALMER, also came to Illinois from Indiana in the 1860s.

Anna’s sister Julia (1858-1924) married Florence’s oldest brother Chester Ashley ROYALTEY (1856-1917). Anna and Florence were neighbors, went to school together and may have been best friends growing up. They both named their daughters Ruth and Ruby. The baby mentioned in the note was Joe ROONEY‘s mother Ruby Pernecia LILLIE who was born in April 1909.

She was identified on the back of her portrait as Aunt Ellen Enoch, Father’s Sister, by her niece Florence ROYALTY. 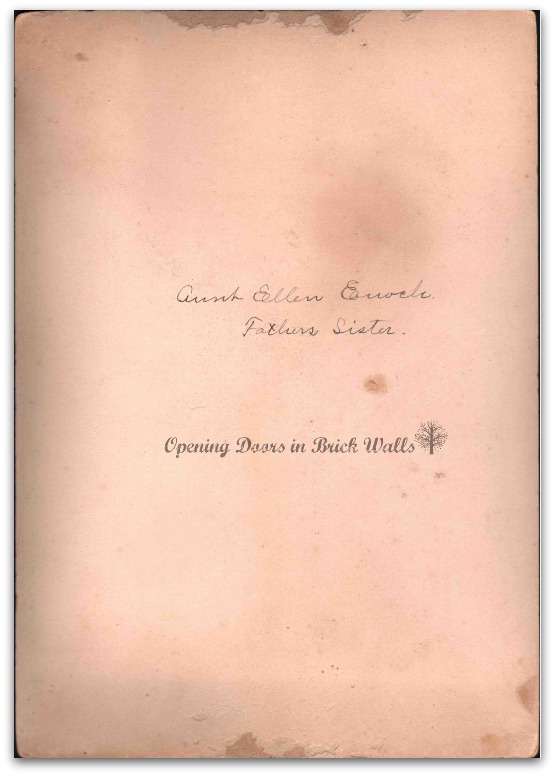 Photographs of the oldest daughter Martha Olephene ENOCH and her daughter Alice B. LOSTUTTER were found in this collection and will be featured next. They will be followed by Ellen and Hananiah’s youngest daughter Caroline “Carrie” ENOCH.

This is a spin-off of my 52 Ancestors: #14 Albert Spencer LILLIE (1848-1913) ~ Old Photographs Saved From Trash Can blogpost in which I featured a few photos from a collection of old photographs my 4C1R Joe Rooney shared with me. I asked Joe about using the photos and he kindly wrote, “Please use them at your will.  I feel it is keeping it in the family and don’t need credit.  If anything, I appreciate your evaluations, identifications and detective work.  I’m hopeful you and yours enjoy them.  On a blog, in a book, above a cloud.”

Hester Ann ROYALTY was the daughter of John ROYALTY and Sarah LUNDERMON. She was also a sister of Samuel L. ROYALTY (1829-1902) and an aunt of Florence ROYALTY (1868-1946) who wrote on the back of these photographs.

Hester’s mother’s maiden name was discovered while I prepared this post. Hester was first married to Marion BLAIR before the 1850 census. They had six children, one of whom died young. On the 1880 census Marion BLAIR was listed as divorced and Hester was not found.

From the information found on the back of Hester’s photographs I knew she must have married again following the divorce. I did some checking in April and found a marriage in Edgar County, Illinois, on 4 June 1882 for Hester A. BLAIR to Moses MARK. I kept coming up with blanks on this man named Moses MARK or MARKS and put it aside for later. Hester A. MARKS was found in the 1900 and 1910 census and was widowed.

I searched again while writing this post and was surprised to find a marriage for Moses MARK to Hester A. ROIETY for the same place and date in the same database searched previously, “Illinois, County Marriages, 1810-1934.” The description of the database reads: Index of county marriages from the state of Illinois. Additional records will be added as they are completed. I don’t know if I missed the second entry due to the misspelling of the bride’s name or it having been added after my first search.

This second entry includes the names of the parents of the bride and groom. The bride’s mother’s maiden name was indexed: Limd… I then searched for John ROYALTY marrying a young woman named Sarah and found a marriage bond and minister’s return for the marriage of John ROYALTY to Sarah LUNDERMON in Spencer County, Kentucky, on 3 February 1824.

Hester Ann ROYALTY’s photographs were the key I needed to open the door to this brick wall. Sarah was widowed before 1850 and died after the 1870 census. Her maiden name was not known until the pieces of the puzzle fell together.

Hester’s second husband Rev. Moses MARKS was one of the original settlers of Monroe Township, Randolph County, Indiana. He was a preacher in the Methodist Church in Farmland, Randolph County, Indiana. His marriage to Hester was his third per the second marriage entry found. He died before the 1900 census. Find A Grave memorial #81207466 for Moses MARK buried in Blackburn Cemetery in Paris, Edgar County, Illinois, shows “My husband” and died at age 74 years. The age of the groom at the time of his marriage to Hester and ages found in the 1850 through 1880 census indicate he was born about 1818. If the age at death is correct, Hester was widowed about 1892.

As of 14 October 2015 this collection of photographs is in my possession. Joe Rooney kindly gifted them to me to use on my blog and facilitate the search of possible close descendants interested in giving them a permanent home.

Joe ROONEY wrote on 15 February 2015: This collection of photographs was scanned at 300 dpi color by me. The original photos were sent by Sandra Lillie about ten years ago after she found them cleaning out a relative’s garage in Southern Illinois, finding no other takers (suckers). She believes they were a collection by L Vance Lillie. Many of the pictures seemed to be removed from frames or were in albums evidenced by fading characteristics and may have been from other’s collections. I scanned the reverse if there was laboratory advertising or writing. Some of the authors’ identification may be figured out of the handwriting matches. I did not scan the reverse of photos where there was only a three digit number that I believe to be sequence numbers on a roll of film. I didn’t spot any obvious helpful commonalities.