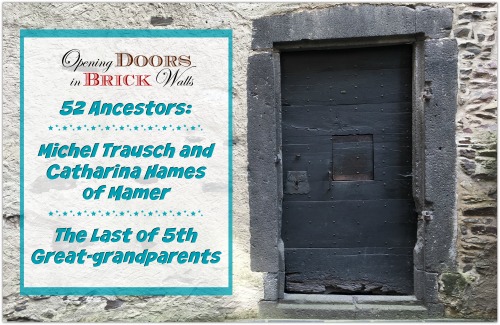 With this post, all of my children’s known ancestors from their grandparents to their 5th great-grandparents have been featured since I began blogging four years ago. I actually did it in three years as I took a break from the 52 Ancestors in 52 Weeks in 2016.

Michel TRAUSCH (1792-1869) and Catharina HAMES (1789-1864) married in Mamer, Luxembourg, on 18 February 1817.1 Their marriage record included the groom and bride’s dates and places of birth. His parents were both deceased; their names and dates and places of death were included. Her parents were living, present and consenting to the marriage. Also present were four witnesses. Michel KOLBACH, the bride’s brother-in-law, and three unrelated persons.

Michel and Catharina had the following children:

As can be seen above Michel and Catharina had seven children, two of whom died young, one who never married, three who married and gave them seven grandchildren, and one son who has not been traced after 1855. Of the grandchildren, only one was a girl – an important fact as will be seen at the end of this post.

Three daughters marry and have children

Maria TRAUSCH although the second born was always the oldest of the bunch as her older sibling died a year before her birth. Maria married Jean MAJERUS (1817-1887) on 31 May 1849 in Mamer.13 He was the son of Jean Baptiste MAJERUS and Catharina CORNELY. Their daughter Marie MAJERUS (1850-1931) was born on 19 June 1850 in Mamer.14 Marie was my 2nd great-grandmother. She lived with her parents and grandparents in the home in Mamer.

Soon after the birth of their first grandchild, Michel and Catharina saw their daughter Elisabeth marry in Kehlen. She married Jean Henri KLEIN (1811-1866) on 15 December 1852.15 A year later, she gave birth to the second grandchild Johann KLEIN on 7 December 1853 in Nospelt.16

The third daughter to marry was Susanna. She married Pierre KLEES (1823-1903) on 14 February 1855 in Kehlen where her sister Elisabeth had married.17

These marriages in Kehlen were only found with the help of the Marriage Database dedicated members of my genealogy association Luxracines are working on. As a member of the board, I have access to the database which will soon be made available on our website. It will be a real time-saver for all researchers who have ancestors who married in Luxembourg between 1797-1923 as marriage records include so much genealogical information.
Lëtz Play! Can You Top This? A Marriage Record With 15 Events

Catharina and Michel die in a three-generation house

Catharina HAMES died on 22 November 1864 at the age of 75 years.23 Her husband Michel TRAUSCH died five years later on 28 December 1869 at the age of 77 years.24 They both died in Mamer in the house called Schreinesch where they had raised their family. It had been a three-generation home as their son-in-law Jean MAJERUS, who was the informant at the time of both deaths, lived there with his wife Maria and their only daughter Marie.

The Parents and Siblings of Michel TRAUSCH

Michel’s parents Remacle TRAUSCH and Theresia BRAUN (also seen as COLLING) were married on 24 July 1787 in Bissen.30 The marriage index cards for marriages in the parish records incorrectly listed the year as 1789. I was searching for a marriage in 1789 and wondering why a child was born in 1788. After not finding the marriage in 1789, I continued back until it was located in 1787. The marriage was recorded twice, by two different persons, first on the 23rd of July and then on the 24th. The later was complete and included signatures.

Remacle and Theresia had six children all born in Colmar-Berg. The oldest three grew to adulthood, married and had children. Franz born in 1788 was the father of 10 children; Catherine born in 1790 was the mother of 14 children; and Michel, as was seen above, was born in 1792 and was the father of 7 children. The three youngest have not been traced past their baptisms: Nicolas b. 1794, Susanna b. 1796, and Maria b. 1798. The mother Theresia died on 16 February 1798 in Berg, a week after the birth of her last child.31 Michel was not yet six years old when he lost his mother. Four of the six children’s baptismal records had their mother’s maiden name listed as COLLING instead of BRAUN(ERS). The different names will hopefully lead to more information on Theresia’s ancestors.

Remacle remarried six months later on 26 August 1798 in Berg to Anne Marie WIROTH.32 They had one known daughter, Peternelle born in 1799. Remacle  and Anne Marie had removed to Luxembourg City from Colmar-Berg sometime after the birth of their daughter and before Remacle’s death on 31 August 1804.33

Two years later Catherine, sixteen years and six months, was in a family way and the conseil de famille, or family counsel, gave their permission for her to marry Peter OLINGER. This was necessary as she was under age and both parents were deceased. Catherine’s uncle Nicolas COLLING, a witness to the marriage, was likely one of the family counsel. It was not mentioned in the marriage record dated 29 November 180634 that she was expecting but four months later on 2 April 1807 she gave birth to a son François.35

By 1813 Franz, the oldest of Remacle and Theresia’s children, was living in Schieren near Ettelbrück where he would marry Eva MERTZ and raise a large family.36 His brother Michel remained in Colmar-Berg until 1817 when he married Catharina HAMES of Mamer.

The Parents and Siblings of Catharina HAMES

Catharina’s parents, Johannes HAMES and Agnes HERTZ were married in Mamer on 18 January 1785.37 They were the parents of six known children. Three sons died as infants, one son died at the age of 18, leaving only two daughters who would marry and raise families. Catharina was the younger of the two. Her sister Susanne was the first to marry. She married Michel KOLBACH, son of Michel KOLBACH and Susanne KIEFFER, on 11 January 1815 in Mamer.38 Her mother-in-law Susanne KIEFFER was one of my 4th great-grandmothers. She had married Paulus FRANTZ after the death of the elder Michel KOLBACH. Susanne and Michel (the younger couple) were the parents of six, two of whom died in infancy. Their four children married and had children.

Agnes HERTZ, her daughter Catharina HAMES, her granddaughter Maria TRAUSCH, and her great-granddaughter Marie MAJERUS are my mitochondrial line down from Agnes’ mother Anna Catharina RONAS. The parents of Anna Catharina are at this time unknown to me. A couple of years ago I talked to a person who appears to have been “on to something” concerning the RONAS family but did not want to make the research public at the time.

Family history research will never be finished or ready to publish. Share what you have, make corrections and additions, write about your ancestors. Yes, it probably will remain a work in progress or a draft of a family book. By sharing what you think is incomplete, you may reach someone who has the missing information or the key to open the door in your brick wall.

P.S. A special thank you to Amberly Peterson Beck, The Genealogy Girl, for letting me know I can enable Markdown in WordPress.com posts, pages, and comments for easier styling, including footnotes – see below, aren’t they beautiful? Note: Footnotes in numbered and bulleted lists did not seem to work until I tricked the editor into not using html formatting for the lists.