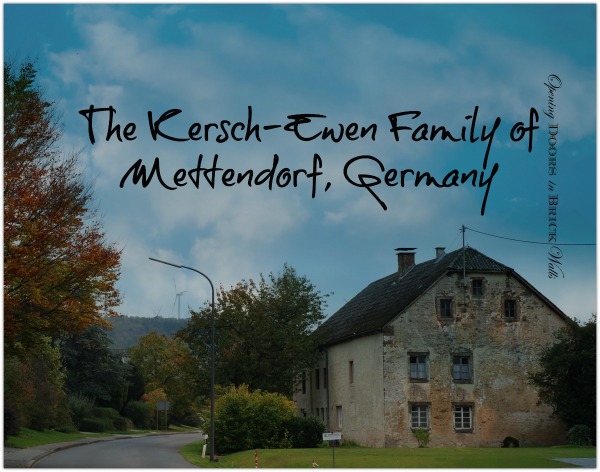 The last set of fourth great-grandparents who lived in what is now Germany were Mathias KERSCHT and Anna EWEN. Mathias’ surname was spelled differently in several family books (Familienbücher=FB). As KIRSTEN in the FB Meckel1; KIRST, KIERSCH, and KIERSTEN in the FB Messerich2; and as KERSCH and KIRSCH in the FB Mettendorf3. For Anna’s maiden name EWEN, no variations were found.

Mathias KERSCHT, the son of Peter KERSCHT and Eva SCHMIDS, was born on 28 March 1759 in Meckel, Eifel, Rheinland, Germany, and baptized the same day. His godparents were Matthias BERENS and Anna Maria SCHUL, both of Meckel. His godfather was likely a brother or relative of his mother Eva. Matthias BERENS went by his wife’s maiden name and was known as Matthias SCHMITZ before his marriage. Mathias KERSCHT had only one known sister Luzia who was two years older. It is not known if she married and had descendants.

Mathias married Anna EWEN, daughter of Gerhard EWEN and Barbara THIELEN, on 26 November 1785 in Messerich. Anna was born on 6 June 1766 in Messerich. She was the fourth of ten children. 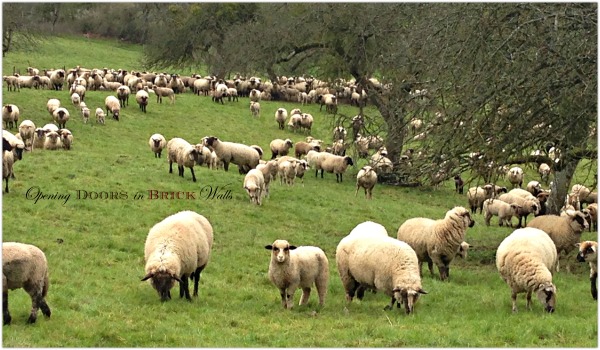 Mathias worked as a sheepherder (Schäfer) in Messerich until about 1795 and then moved to Mettendorf where he continued to work in the same occupation.

Mathias and Anna had the following children.

1. Margaretha was born on 9 September 1786 in Messerich. She was baptized the same day. Her godparents were Peter KIRST of Meckel and Margaretha BAUER of Messerich. Was the godfather also the child’s grandfather? The FB Meckel in which Mathias’ father was found as Peter KIRSTEN does not include a date of death.

2. Anna was born on 4 October 1788 in Messerich and was baptized the same day. Her godfather was Theodore EWEN, single, from Messerich, likely her maternal uncle who was 27 years old at the time. Her godmother was likely her paternal grandmother Eva. The entry in the FB Messerich shows Evan KIERSTEN of Meckel. The godmother’s first name may be a typo in the book and the child was not given the name Eva or Evan but Anna. She married Heinrich LUDEWIG on 23 January 1809 in Mettendorf. They were the parents of eleven children. Anna died on 8 January 1843 in Mettendorf.

3. An unnamed child was born on 19 December 1790 in Messerich and died the same day.

4. Catharina was born on 14 December 1791 in Messerich and was baptized the same day. Her godparents were Jakob WEILER, a sheepherder (Schäfer) and Katharina LOCH of Spangdahlem. Catharina married Joannes Friedericus LOCHEMES on 19 September 1811 in Mettendorf. Joannes Friedericus was born about 1784 in Dahlem. From the time of their second child’s birth, her husband was given as Theodore LOCHEMES on all births thereafter. They were the parents of seven children. Catharina died on 9 December 1851 in Mettendorf. Her husband died on 16 January 1864 in Mettendorf.

5. Matthias was born on 19 April 1794 in Messerich and was baptized the same day. His godparents were Mathias SCHMITZ, a pig herder (Sauhirt) of KIRCHWEILER and Luzia BICHELER of Messerich. Matthias married Angela ACHEN on 21 January 1818 in Mettendorf. Angela was born on 11 December 1793 in Mettendorf. She died on 21 December 1870 in Mettendorf and Matthias died on 16 November 1876 in Mettendorf. They were the parents of seven children, two of whom died young. Their three youngest children went to America in the 1850s and settled in Wright County, Minnesota. Two were sons and their descendants spelled the surname KIRSCHT.

8. Anna Catharina was born about 1806 in Mettendorf. She died on 22 May 1824 in Mettendorf at the age of about 18 years and was buried the following day.

10. Johann was born on 18 February 1811 in Mettendorf and was baptized the same day. His godparents were Johann WEYERS and Margaretha THEISEN, both of Mettendorf. Johann married Elisabeth ROTH on 7 January 1841 in Nusbaum. The family lived in Sinspelt, part of the Mettendorf parish. They were the parents of two known children, one of whom died young. No entry for his death was given in the FB Mettendorf which may mean he died after 1899.

As mentioned at the beginning, this is the last of my fourth great-grandparents who lived in the Eifel area of Germany. Next up will be the eight sets of fourth great-grandparents who lived in Rodange, Wiltz, Vianden, Echternach, Mamer, Capellen, and Strassen in Luxembourg. With only five weeks to the end of the year, it looks like I may not be able to get them done on schedule.