Last week I had a bit of Difficulty Getting Around the Hill. I wondered what became of several of Dennis HILL and Mary Ann BAKER’s children who seemed to disappear after 1880. Where else can information be found on this elusive family? The question led me to an amazing discover.

I was getting desperate to find information. Not only is HILL a common surname, it is also a word found in so many location names. I tried different internet search combinations. “Dennis Hill” + family + Saline pulled up first my GEDCOM and then two sites with “Dennis Hill Family Bible,” a combination I would never have thought to search. This led me to the MoSGA (Missouri State Genealogical Association) site with their Journal in PDF form – online and free.

Have I mentioned lately that genealogy associations and societies have the best hidden genealogy treasures? Not everything is on the internet but some associations have begun to share their publications online.

I was doing the genealogy happy dance when I found MoSGA’s website which includes their Journal for the years 1985-2005 (more current issue are available in the Members Only section)  and their newsletter for the years 2011-2016. If you have families in Missouri don’t pass up the information you might find on them in the Journal or the newsletters.

The first article in the second issue of the Journal was a transcript of the marriage, birth, and death information found in the Dennis HILL family bible. A new key to open the door in this brick wall!

Information found in the bible transcript (we’ll get it in a moment) led to a further online search which turned up another piece to the puzzle. I searched for “Timothy Hill” + Saline + 1900 and found this obituary cut from the Miami News and pasted into a scrapbook kept by Wilbert S. Myers (1871-1940) and now in the possession of The State Historical Society of Missouri.

ARTHUR TIMOTHY HILL
Died, at his home in Slater, Wednesday, March 28, 1900, at 3 o’clock a.m., at the age of nearly 22-years, Arthur Timothy Hill, after 2 1/2 weeks’ illness, the result of pneumonia.
The deceased was the son of Dennis and Mary Hill and was born in Chariton County, and for 8 years up to last May lived at Miami, when he moved to Slater, where he drove a dairy wagon for Claude Fields. He joined the Christian Church at this place in 1893, and was a consistent member.
Funeral services were conducted at the family residence in Slater by Elder Shelton, and the remains were interred at the Baptist cemetery at this place Thursday, Elder Prewitt officiating.
[Source: Miami News clipping, Wilbert S. Myers diaries and scrapbook, transcribed by Meredyth Lee (Myers) Devin, used with permission]

So much information in two short paragraphs. The HILL family lived in Chariton County until about 1881 when they went to Miami in Saline County. They lived in Miami until May 1899 when they moved to Slater. We are talking about the time period between the 1880 and 1900 census!! Missing years for so many of us. Mr. Myers diaries and scrapbooks may have some tidbits for others with ancestors living in Saline County during the period.

Welcome to a journey back in time….

I wrote to Meredyth Lee (Myers) Devin and she kindly gave me permission to quote the obituary I found on her site. Her grandfather kept diaries which “preserve a way of life in a little town that really doesn’t exist anymore…..just a post office and church among the farms.” Meredith also wrote, “Like you, there are many times when I wish that he (my grandfather) had written more about certain events and more about the people of Miami, but I guess we should be grateful for what we have.” Please take a moment to leaf through Mr. Myers’ diaries on the Rootsweb site Welcome to a journey back in time…. developed by his granddaughter Meredyth Lee (Myers) Devin.

Let’s discuss what I found in the bible transcription

The introduction to the bible transcription includes census information and the same assumptions I made about the family’s move to Missouri. The year of print of the bible places it’s purchase at 1890 or later. Which means the date of marriage and the dates of birth had to have been written down after the fact. Before I go into the ownership, let’s discuss what I found in the transcription:

The last date recorded in the bible was the death of the youngest son Timothy in 1900. At the time his mother Mary Ann, his sisters Anna Belle and Zettie May, and his brothers James Isaac and Albert Henry were still living. Four people, excluding Albert who was in Kansas as early as September 1899, could have been in possession of the bible at the time of Timothy’s death.

I researched Haddon HILL of Leawood, Kansas, the last known owner of the bible, to determine his relationship to the Dennis HILL family.

George Haddon HILL (1898-1980) lived in Jackson County, Missouri, in 1900 and 1910. By the time the WWI draft cards were filled out he was working on his father’s farm in Waldron, Platt County, Missouri, were he was also living in 1920. He was living in Jackson when he married Lena OBERDIEK from Platt in 1925. They lived in Kansas City in 1930 and 1940 and had two daughters.

In 1900 while Haddon was living with his parents Lee Jackson HILL (1862-1940) and Sarah Diana LUSEN (1864-1942) in Kansas City, Missouri, his grandfather Samuel Henry HILL (1817-1906), widower of Jamima WORSHAM (1864-1897), was living in Slater, Saline County, Missouri, with his son Samuel Henry Jr. and his family. The Samuel Henry Hill Sr. family came to Missouri from Lunenburg County, Virginia, after the 1880 census. Before living in Lunenburg they were in the adjoining county of Nottoway in 1850.

The history of Haddon’s family does not show a connection to Dennis HILL other than Haddon’s grandfather living in the same town as Timothy at the time of the later’s death. Interesting to note is that Algernon Archer HILL, Haddon’s uncle, also lived in Slater. He  had two sons, Sam and Claude, who owned the Hill Brothers Funeral Home from 1910-1958.

Was the family bible saved by a non-related HILL family? Following Haddon’s death, did it pass to one of his daughters or was it donated to The State Historical Society of Missouri or a similar association? Or, did Mr. Hill find a home for the bible with a descendant of Dennis HILL?

Why Have I Gone Through This Exercise?

The main reason I wanted to learn as much as possible about Dennis HILL and his family was because I believe he may have been the oldest son of my third great-grandfather William CLONCH. Collateral lines are important to my genealogy research. You never know when you’ll find a distant cousin who has the answers to your questions. 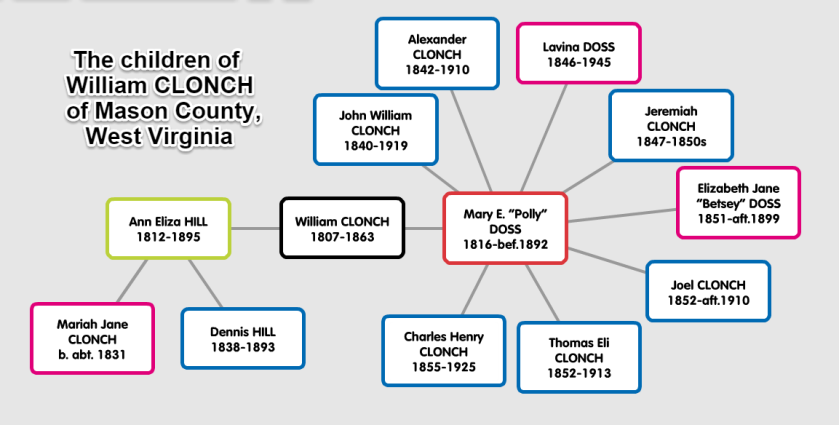 After the first of this series, The Mysterious Ann Eliza HILL, wife of William CLONCH, was posted Janet Webster Brown, creator of the Genealogy Bloggers group on Facebook, left this comment: “DNA testing might help resolve whether Anna Eliza was the same in both families, yes? no?” All I could say was, “I’m working on it!”

Will DNA help in getting around the hill? Join me next week when I take my first plunge into the genetic pool to figure out what I have and what I need to make DNA work.