Since I am presently concentrating on the RUPP, RUPE, ROOP, ROUP, ROOPE, ROUPE, RUPPE families I thought I would share heirlooms which are still in the family only not in my possession.

My great-grandfather Walter F. ROOP was a blacksmith, coal miner, artist, poet, photographer, and cartoonist. He left us precious memories including this photo of the Gauley River. Walter took three photos at Jodie in Fayette County, West Virginia, in 1921, tinted them by hand, and put them together to make this panorama view.

The year 1921 was a very productive year for my great-grandfather. Not only did he make the panorama photo of Gauley Bridge, he also made ink drawings which were passed on to his children and are now in the possession of two grandchildren and a great-grandchild.

His granddaughter Peggy Jean Ramsey Baker recounted how the Panther and Deer and The Grizzly drawings were copied from pictures in a big book (maybe some sort of history book). She saw the pictures which were approximately 2×2.5 inches in size in the book as a child. She believes there was a third drawing of “some sort of cat in tall grass.”

When I wrote my post on Walter in 2014 my cousin Linda Roop let me know she has the third drawing and shared a photo of it. It’s in the original frame made by Walter F. ROOP but she was not able to get a good photo due to the size and it being behind glass.

Isn’t it wonderful how the three drawings are now united even though they are at home with Walter’s descendants through his children Edith Estelle, Myrtle Hazel, Walter Gordon and Alfred Lee?

This beautiful black stained glass baby grand piano music box is one of my newer heirlooms. It was sent to me by my third cousin twice removed James S. INGRAM for Christmas 2004.

The music box plays the “Edelweiss” melody, the last song Rodgers and Hammerstein wrote together. 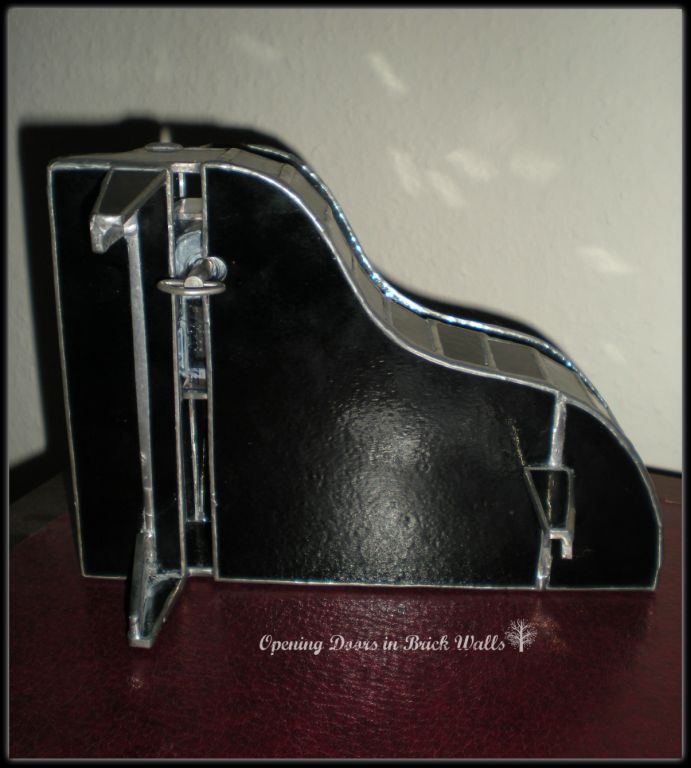 Before Jim gifted me this music box he had been sending me wooden carvings he made: Christmas 2001 a crane, Christmas 2002 a quarter moon Santa and a “hillbilly” boot, Christmas 2003 a Santa pencil and a cardinal. As you can see he is a very talented cousin.

Jim and I worked on our INGRAM line for several years after we found each other around 2000-2001 on a message board. I felt he sent me more information than I shared with him but he was determined I should have everything so that I could one day open the door to our INGRAM brick wall.