Which Cora is which? 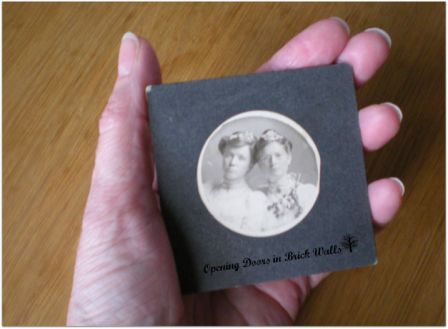 This is the dilemma I’m facing with this photograph taken by Riley & Cook of Paducah, Kentucky. I was amazed at how small the original photograph is. The photo is mounted on a 2.75 inch square cardboard frame with the name of the photographer debossed in the lower left corner. Both ladies are wearing matching flower corsages in their hair. The lady on the right has a corsage which looks like a bouquet with the stems pinned on her shoulder and the flowers draping down. I would like to date it at 1898 for reasons seen below. 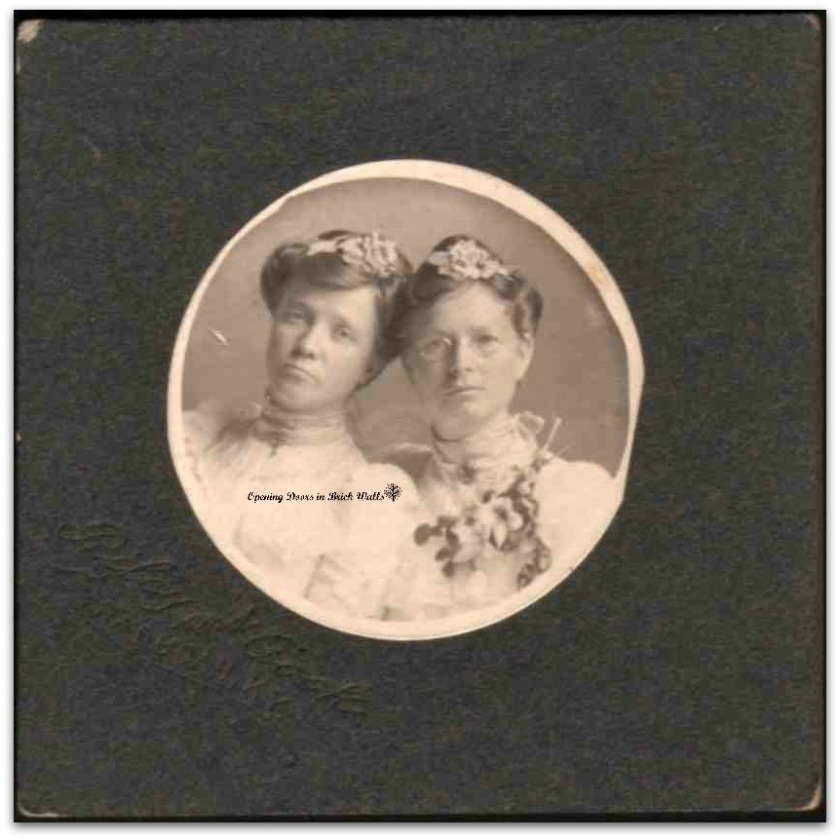 I believe the lady on the left is identified as Cora B. GOLIGHTLY. Below her name is written “married Mr. COLVIN” which suggests GOLIGHTLY was her maiden name. The lady on the right would be Cora DAVIS. Azotus, written below the names, is the name of the cemetery in which Cora B. GOLIGHTLY’s parents Calvin W. GOLIGHTLY and Sarah K. METCALF are buried. No where have I found it is a town name in Illinois.

I thought Cora DAVIS may have been another name for Cora GOLIGHTLY, before or after her marriage to Mr. COLVIN, due to the brace or curly bracket, until I searched Pope County for Cora DAVIS.

Cora B. RUSHING (1881-1964) married Peter DAVIS (1878-1939) and both are buried in IOOF Cemetery, Golconda, Pope County, Illinois. I didn’t find a marriage record for them. On Find A Grave their date of marriage is listed as 19 April 1898 in Pope County. I was able to confirm this date using the Illinois Statewide Marriage Index, 1763-1900 on the Illinois State Archives site. Cora was born after the 1880 census and married before the 1900 census which means she was not found on a census with her parents. I have not found any source which lists the names of her parents.

Could this photograph have been taken on her wedding day? Was Cora B. GOLIGHTLY her maid of honor? Both ladies were born in 1881 and lived in Pope County, Illinois, while growing up. Were they best friends or related to each other?

Cora B. GOLIGHTLY (1881-1984) married Charles Owen COLVIN (1872-1943) about 1928 when she was 46 years old and following her widowed father’s death in 1926. I hadn’t been able to locate the couple in the 1930 census until I tried wild cards and found the surname spelled Calvin. On this census Cora was seen as age 48 married at age 46. Her brother Hiram GOLIGHTLY was in the household and helped make the positive identification. Cora and Charles don’t appear to have had children together.

And now dear reader please tell me, which Cora is on the left and which on the right in the photograph?