Week 3, Tough woman — Who is a tough, strong woman in your family tree? Or what woman has been tough to research?

My husband’s maternal grandparents were Franz KREMER (1905-1971) and Susanna PEFFER (1910-1987).  Their names were seen on their birth records and marriage record as Franz and Susanna. In later years their first names were spelled François and Suzanne. Records in Luxembourg were kept in German and French at different times. It is not unusual to see the German spelling of a name on records and the French spelling on the index and/or Tables Décennales – ten year tables.

Franz KREMER was born on the 6th of March 1905 in Bettendorf, Canton of Diekirch, Luxembourg. He was the first son of Nicolas KREMER, a railroad worker, and Catharina GRISIUS. Nicolas, the 29 years old father, went to the records office at 10 o’clock in the morning to have his son’s birth recorded. Franz was born at 2:30 in the morning. The child’s grandfather Anton KREMER, the 70 years old municipal crier, was a witness. He signed his name Antoine KREMER, the French spelling, while the municipal secretary wrote in his name with the German spelling, Anton. Franz’s mother was listed as 25 years old and without an occupation.[1]

Franz spent his childhood in Bettendorf were he was born. He grew up with six sisters and a little “brother” who was actually his oldest sister’s son. That is a story for Week #7 when his parents and siblings will be highlighted.

Susanna PEFFER was born on the 18th of February 1910 in Wecker, in the community of Biwer, Canton of Grevenmacher, Luxembourg. She was the youngest daughter of Nicolas PEFFER, a shepherd, and Maria MERTES. At 4 o’clock in the afternoon on the 19th of February 1910, Nicolas, 45 years old, arrived at the records office in Biwer to have the birth of his daughter recorded. His 34 years old wife Maria had given birth to Susanna the day before at noon. An annotation of Susanna’s death is included in the left margin of the record.

Susanna/Suzanne caused problems in my research from the very beginning and so you could say that she was tough to research. Twenty years ago my first call to Biwer to get a copy of her birth record from the records office did not go well. This is not meant in a negative way. Some records offices would send copies of records requested by telephone after a small fee was received while others required a written request with or without a fee. In this particular case they would not search unless I came in person. I didn’t pursue it further as I already had a copy of her marriage record which listed her birth information.

When the images of civil births, marriages, deaths, and indexes became available at FamilySearch.org I did not immediately look for hers. I finally got around to looking for her birth record this past December.

While putting everything together I learned that she was a lot tougher than any of us knew. My husband’s grandmother had two sisters and a brother – this was a known fact. What we did not know was that she was the 9th and most likely last child of Nicolas and Maria PEFFER-MERTES. Her first four siblings, three brothers and a sister, were born and died during the first five years of her parents’ marriage. Another brother, her closest sibling as he was born the 8th child, lived less than three months. I searched the birth records of Bettendorf, where 7 of her siblings were born, and of Biwer which includes Wecker where the two youngest were born, but did not find a child born after Susanna. Census records are presently available to 1900 on FamilySearch for Luxembourg. How I wish the census of Luxembourg were available to 1940 as they are in the U.S. so that I could trace Susanna’s location during her childhood.

Franz and Suzanne most likely knew each other growing up as the villages of Bettendorf and Moestroff are only 2.5 km apart.

On the 7th of January 1931 at 6 o’clock in the evening the mayor of Bettendorf, Johann Peter MULLER, joined Franz and Suzanne in marriage. Franz was 25 and Suzanne was 20 years old and considered underage. Franz’s father Nicolas was present and agreeable to the marriage, his mother was deceased. Suzanne’s father Nicolas was present and agreeable to the marriage, her mother was deceased. The banns had been read only once on the 28th of December 1930. A marriage contract was not drawn up by the couple prior to their marriage. No witnesses are listed on this marriage record which was signed by the bride and groom, the fathers of the couple and the mayor.[3]

Susanna had already begun to use Suzanne as the spelling of her name when she signed the marriage record (above).

Their first child Marie Françoise was born in Rumelange on 29 August 1931. As previously discussed in 52 Ancestors: #1 The MEDER-KREMER Family (1926-1996) Maisy, as their daughter was known, believed that she had been a twin. As no records were found we will never know if this story was true.

Some time after Maisy’s birth they moved into their new home on the bank of the Sauer River in Moestroff.

Four years later, in 1935, a son was born and named Aloyse. On the 1st of April 1936 his father François was notified at work that his son had died. He was very upset with the people who brought the news because he thought they were playing an April Fool’s joke on him. Unfortunately it was true. In 1939 their third child, a son, was born and they named him Aloyse.

In 1946, he was entrusted with the post of first aldermen (1. Schöffen) of the municipality of Bettendorf for the Moestroff section. He unselfishly provided them with great skill and prudence until 1958.

A Family and Town Tradition

Above right, is the Kremer-Peffer house as it is today, renovated by the new owners. The Kremer-Peffer family used the land on the left side and behind the house to raise a vegetable garden and an apple tree. François also had another larger garden located on the other side of the building next door (above, left) that was used for storage by the town. He planted rows and rows of potatoes, grew green beans on poles, and had 6-8 plum trees.

Quetschen,  Luxembourgish plums, are a deep purple, elongated in shape with a long thin stone. The family and the town had a tradition associated with this tasty plum, the cooking of Quetschekraut. In late August when the Quetschen were ripe and picked, François would build a fire in front of his house for the large copper pot that would be used to cook Quetschekraut. The townpeople would bring their own Quetschen to the Kremer house. They were weighed before the women would cut them and remove the pits. The adults would take turns stirring the fruit, sugar and spices until it became a thick compote. This was then filled into stone jars like the smaller ones (below) to be taken home by all of the families who participated. How many they took home depended on how much fruit they had contributed to the huge batch.

This  tradition of cooking Quetschekraut is no longer kept up as it was in their days. Today we buy ours in a mason jar at the mall from the musicians of the “Schëtter Musek”. It is only sold on one weekend so we always make sure to mark our calendars.

Not all of the fruit was used for Quetschekraut as Quetschentaart is another favorite in Luxembourg.

The Death of a Spouse

Just two months before his 66th birthday François KREMER died from a prolonged illness in his home in Moestroff. The insidious disease that had attacked him was lung cancer and slowly with severe suffering put an end to his life on 7 January 1971. 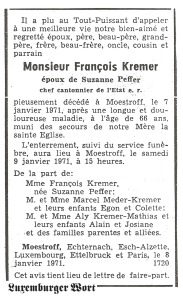 His open nature and correctness earned him friendship, trust and respect. For years he was president of the local church choir. This association was very dear to him.

Fritz, as he was known by his colleagues, was an avid fisherman. He was often seen on the banks of the Sauer River were he swung his rod and chased pike and carp, silently and patiently outwitting them. Only the illness that claimed his life stopped him from enjoying this sport in his last years.[4]

His marriage to his faithful companion Suzanne and his children, his daughter Maisy and his son Aly, brought deep happiness to him. He was fond of his four grandchildren who called him Bop. They were dear to his heart and filled his days with love to the last. 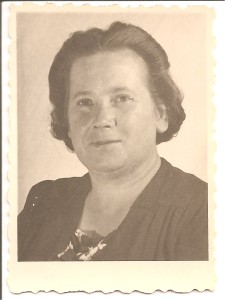 Suzanne continued to live in Moestroff in the home near the Sauer River. She would telephone with her children everyday, alternating between her calling them and their calling her. On Fridays she would take the bus to Diekirch to do her shopping, visit the butcher for a beef roast to serve on Sunday, see her doctor, and pick up her medicine at the pharmacy.

The family often joked about the shoe box full of pills and other medicine that she used everyday and brought along when she spent a few days with one or the other of her children.

On Sundays she would often have her daughter’s or her son’s family come to dinner. Before her daughter Maisy and her son-in-law Marcel had a car they would take the bus from Echternach to Moestroff, arriving while Suzanne was at church. Maisy would begin preparations for dinner while the family waited for Bom, as she was known by her grandchildren, to come back from church.

On Mother’s Day and Kirmes Sunday Bom would invite both families to dinner at a restaurant. Kirmes, the traditional fair, is an important event in the religious and social lives of the inhabitants of a town. Bom had not always taken the family to a restaurant for Kirmes. When she was a little younger she would cook for the whole bunch. Everyone would squeeze into her small front parlor, which was her living and dining room. If someone needed “to go” and he was sitting with the table between him and the door several people would have to get up to let him out. The grandchildren enjoyed crawling under the table to get out.

Suzanne was a tough woman during these years that she lived without her husband. But this changed when her daughter Maisy died in 1986 of cancer. She also lost her grit after her first and only stay in a hospital at the age of 77. She gave up on life when she was diagnosed with an illness “down there.” It wasn’t talked about and only later would we learn that she may have had cancer in her reproductive organs.

On Saturday afternoon the 13th of June 1987, the day before Mother’s Day, she took her afternoon nap, as usual, in her armchair resting her legs on the foot rest. She wanted to be well rested for the planned dinner with the family on Mother’s Day. But that was not to be. Her sister Tattes found her later that afternoon. Suzanne, our Bom, had died in her sleep of heart failure.