Susanne KIEFFER was born on 25 March 1754 in Mamer to Nicolaus KEIFFER (1734-1796) and Susanna SCHILTZ (1737-1807). Earlier variations of the KEIFFER surname were KIEFER and KÜFFER. Susanne was the oldest of eight known children. The only reference available online is an alphabetical family group register of births/baptisms and marriages for the town of Mamer. Actual parish records for baptisms, marriages, and burials in Mamer are only available on FamilySearch for the years 1779-1793.

Susanne was my fourth great-grandmother. She married Michel KOLBACH on 17 February 1783. Michel was born about 1748 in Kehlen to Francisci KOLBACH and Maria KAYSER. His parents were deceased at the time of his marriage. Michel and his parents were not my ancestors.

Susanne and Michel were the parents of five children.

These children are documented as they were born during the period in which actual parish records are available on FamilySearch for baptisms, marriages, and burials during the years 1779-1793.

Following the birth of Susanne and Michel’s fourth child, her sister Elisabeth married Nicolas CHRISTOPHORY (1743-1803) on 11 May 1789. Elisabeth was the only known sibling of Susanne to also marry.

When their youngest child had just turned two years old, Susanne was widowed when Michel KOLBACH died on 30 May 1793. He had been a linen weaver or linitextor and was about 45 years old.

A little over seven months later Susanne remarried. On 7 January 1794, she married Paulus FRANTZ. Paulus was the son of Nicolaus FRANTZ and Angela BARTEL of Senningen.

No marriage record has been found for Susanne and Paulus. Their marriage is recorded on a marriage index card. The information on the card points to Paulus being from Bergem in the parish of Schifflingen. Per the 1843 census, Paulus was born on 10 August 1763 in Senningen. On the 1846 census, the day and month were the same but the year was 1764. The place of birth on the 1846 census was blank. Although their names are known, his parents and siblings are at this time a brick wall.

Paulus was my fourth great-grandfather. When he married Susanne he took on a family of five children between the ages of 3 and 10 years. Like Susanne’s first husband Michel, Paulus was a linen weaver.

Susanne was soon expecting twins. Nicolas and Johannes were born on 21 November 1794. As no birth records are available for the twins it is not known who was the oldest. Nicolas or my third great-grandfather Johannes.

When the twins were seventeen months old their grandfather, Susanne’s father, Nicolaus KEIFFER died on 1 May 1796.

Susanne gave birth to another son on 10 January 1797. He was named Henri. Less than two months later Susanne’s youngest daughter from her first marriage, Anna Maria, died at the age of five years on 6 March 1797. The family may have been battling some kind of disease or the baby was not strong enough to survive as little Henri died on 6 June 1797 at the age of five months.

The children grew and by 1802 the Susanne’s oldest daughter was courting and the results were soon to be seen. Margaretha was 17 years old when she married Leonardus RÖELINGER on 18 November 1802. Three and a half months later, on 9 March 1803, she gave birth to a boy she named after her father Michel.

Susanne’s brother-in-law Nicolas CHRISTOPHORY died on 16 December 1803. His widow Elisabeth was 46 years old when she married Theodore HELLESCH on 7 May 1806. It was on this marriage record that the 1796 date of death for Nicolaus KIEFFER, the bride’s father, was found.

Susanne’s mother Susanna SCHILTZ died on 4 August 1807. Her son-in-law Paulus FRANTZ was the informant on her death record. A little over a year later, on 9 October 1808, he was once again at the city hall reporting a death. This time it was his wife Susanne KIEFFER who died at the age of 54 years. She left 4 KOLBACH children and the FRANTZ twins.

My 4th great-grandfather was now alone to care for his 13-year-old twin boys and three unmarried step-children who were in their twenties. Only his step-daughter Marguerite was married with two little boys but likely also living in the household as was her right as the oldest.

Five years after the death of Susanne her daughter Catherine KOLBACH married Jacques HENTGES in Mondercange on 29 December 1813. This marriage was only found in the last few days.

Her brothers Michel and Peter KOLBACH would add some very interesting branches to my family tree.

Confused? I hope this will help. 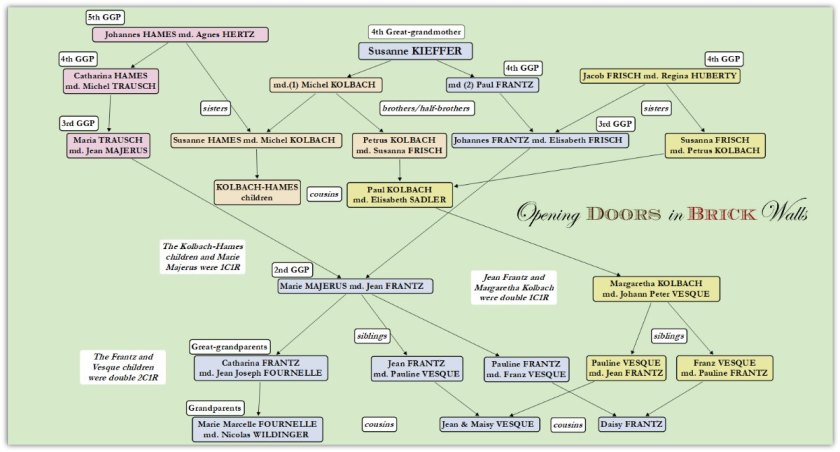 It would be another nine years before the other twin, my fourth great-grandfather, would marry Elisabeta FRISCH (1800-1880), daughter of the above mentioned Jacob FRISCH and Regina HUBERTY. They were married on 18 January 1827 in Holzem.

All of Paulus FRANTZ’s children, biological and step, were now married. I believe Paulus was living in the home he had shared with his wife Susanne with her oldest daughter Margaretha and her family. This is supported by the census taken in 1843 and 1846. But before the census was enumerated there were several deaths in the family.

The oldest of the bunch, Margaretha KOLBACH had given birth to ten children. She died on 16 December 1838 in Mamer. She left a widower and six children. During the years the family had changed the spelling of RÖELINGER to RELINGER and finally REDLINGER, the version seen when Margaretha’s widower Leonardus die on 20 March 1843.

In 1843 when the census was taken, Paulus FRANTZ was the head of a household in Mamer. Living with him was his step-grandson Peter REDLINGER, his wife Susana WAGNER and their four children. Both of Peter’s parents were deceased and he was likely the oldest of the REDLINGER children. The family home may have been passed on to him. In 1846 Peter REDLINGER was the head of household and Paulus FRANTZ, as well as three of Peter’s single brothers, was living with the family.

Paulus died at 8 in the morning on 27 July 1847 in Mamer at the age of 83. His death was reported by his step-grandson Peter REDLINGER.

The only living KOLBACH child, Catherine died on 30 October 1869 in Bergem. Until a few days ago I thought she may have died as a child. However, after finding her marriage record, I learned she was the mother of at least six children. Her husband Jacques died on the oldest son’s 15th birthday in 1830 leaving her widowed with children between the ages of 2 and 15.

One final note of interest and the reason for the peculiar title for this article. My 4th great-grandparents Paulus FRANTZ and Susanne KIEFFER were the 2nd great-grandparents of the famous Nicolas “Nic” FRANTZ, winner of the 1927 and 1928 Tour de France. He was not the first Luxembourger to win the Tour but he was the only one to win it twice and twice in a row.

P.S. Things are always busy this time of the year and I have not had the time to include the sources at the end of my last few articles. I relied on being able to point my readers to my online GEDCOM file, however, Rootsweb is currently unavailable and it is not known how long the downtime will last. Three more sets of 4th great-grandparents to go and then I will come back and add the sources later in January 2018.