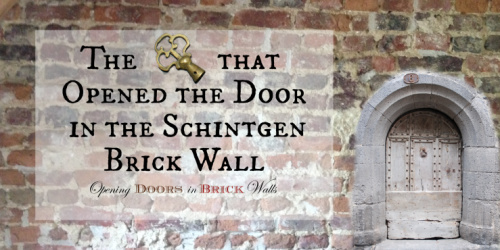 While gathering the records to tell the story of my 5th great-grandparents Hubert CORNELY and Margaretha EVEN from Wickrange in Luxembourg, I made an awesome discovery which turned out to be a key to open the door in a brick wall.

Hubert and Margaretha’s marriage banns were proclaimed in Reckange-sur-Mess and in Obercorn, the towns they lived in at the time. There was no opposition and the couple married in Reckange on 23 March 1779.1 The marriage record was written in Latin. I’m fluent in English, Luxembourgish, French, and German but Latin is not a language I learned in school. I’ve picked up many of the words in church records but am stumped when it comes to grammar and declension. I can usually pick out the most important parts: the date; names of persons present, residences, and occupations.

Religious marriage records for the most part follow a pattern and can be between two lines and two to three pages long depending on the priest and persons marrying. The longer the better as long as the handwriting is legible.

This marriage record is nearly an entire page and has quite a few marks and signatures at the end. Names and locations were easily abstracted but some of the words were not legible until I got used to the handwriting.

This line stood out:

Hubert CORNELY’s mother was Marie SCHINTGEN whose parents and siblings were not known at the time. The spelling is different but at the bottom of the record the witness left his mark and his name was written Huberti SCHINTGEN.

witnessed by Hubert Schintgen uncle of the bridegroom from Schouweiler.

With this short line in the marriage record, I had a lead to the parentage of Marie SCHINTGEN (1725-1790). These are the steps I took to find them.

Tables des mariages 1700-1798 (index organisée par l’époux/l’épouse), is a card index of marriages performed in parishes in the Grand Duchy of Luxembourg before 1800. I wrote about how this database came into existence in this post:

My genealogy society Luxracines has the marriage collection indexed on the Luxracines website which makes it a bit easier to search than browsing the digital images of the cards.

I did a simple search for Hubert SCHINTGEN (SCHENTGEN). This turned up a marriage in Dahlem in 1764 for Hubert SCHENTGEN and Anne SIMON. 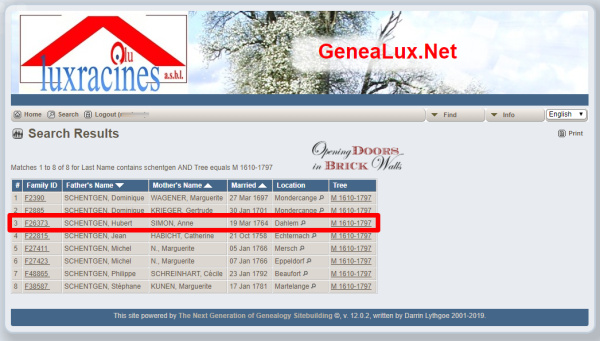 Hubert seen in the 1779 marriage record was from Schouweiler which is in the parish of Dahlem. Geographically this could be a match. At FamilySearch there were two collections which could include the 1764 marriage record:

The marriage was recorded in table format and included the groom’s parents and the bride’s deceased husbands’ names. The marriage took place in Schouweiler.2

This format actually had the same information as the table format found in the first collection.3 It was a first marriage for Hubert SCHENTGEN (highlighted in yellow) and a third for his bride Anna SIMON (highlighted in orange below) who was the widow of Nicolas ARENDT and of Nicolas KIRBACH. Most important at this time were the names of the parents of Hubert: Michaelis SCHENTGEN and Susanna JOST, a married couple from Mondercange.

This was something to keep in mind for later. The entry above Hubert and Anna’s is for another marriage which took place the same day. Anna’s son Joes (Johannes or Jean) ARENDT from her first marriage (highlighted in orange above) married Catharina SCHENTGEN, daughter of Christian SCHENTGEN and Anna MESCH (later seen as MEYERS or MEYERSCH) (highlighted in pink).

Back on Luxracines’ website, the search for SCHINTGEN or SCHENTGEN with the first name Michel or any variations of the first name was negative. I used the advanced search to filter out surnames starting with SCHINT and SCHENT with a first name starting with Mich. Only one hint was close: Michel SCHINTGES married Susanne JACQUE on 18 June 1713 in Mondercange.

✔ for Michel and Susanne’s marriage record

Although the bride’s maiden name was JACQUE instead of JOST, I looked up the index card for the marriage for possible further information. Individuals in Luxembourg church records may be found with a house name instead of a surname. In this case, it is prudent to view all records for the individual or their relatives to determine if the name is consistent.

Additional information found on the card: the groom was from Mondercange and widowed (veuf), the bride was from Schifflingen, and the record was in the parish records of Mondercange on page 135.4

The actual record gave no further identifying information. Parents’ names were not included.5

✔️ for Michel and Susanne’s children

Mondercange is one of the parishes in Luxembourg which has records missing for certain (long) periods of time. The only collection which would include children born to a couple married in 1713 is:

This is the book with the earliest church records for Mondercange. I searched for the year 1713 and worked my way forward to 1729 recording each child born to Michel and Susanne. The mother’s maiden name wasn’t listed in any of these baptismal records however the names of the godparents looked promising.

In the above list of children, child #3 Jacob’s godfather was Jacob JOST of Schifflingen. Could he be the grandfather or a maternal uncle of the child? The surname of the godmother of child #5 Maria (who I believe is very likely my 6th great-grandmother) was corrected from JOSTEN (a variation of JOST) to JACK (a variation of JACQUE). Was she a maternal aunt or other relation?

Note: There was another Michel SCHINTGEN with a wife named Maria having children at the same time in Steinbrücken, also a part of the Mondercange parish. Their children’s records appear to show the parents were Michel Schintgen and Marie Schmidt who married 31 March 1706 in Mondercange. This helped to discard persons of the same name.

I searched the members’ trees on Luxracines as well as Geneanet.org for SCHINTGEN (and other spellings) in Mondercange. Very few Luxracines members who share their GEDCOM files have worked on early families of Mondercange, likely due to the many missing records. One tree on Geneanet shows Michel SCHINTGEN married to both Susanna and Maria. Obviously, a mistake I was able to avoid as I had paid attention to the family group living in Mondercange and the family group living in Steinbrücken (Pontpierre).

The SCHINTGEN families of Luxembourg seem to all have had a Michel!

Since Michel SCHINTGEN who married Susanna JACQUE was a widower, I checked for children born before the 1713 marriage. Only one child was found:

Joes (Johannes) baptized 5 July 1709, parents were Michel and Angela, godparents were Joes Kauffman and Maria Roden both of Mondercange.11

With this information, I checked for a death record for Angela after the child’s birth in 1709 and before the marriage in 1713. I found a death record dated 16 May 1711 for Angela SCHINDGES of Mondercange.12 It is a one-liner and does not mention the wife of or a child of. No confirmation that Angela was the wife of Michel. Angela SCHINDGES was not the only person of this name in the town of Mondercange as another death entry was recorded on 24 July 1714 for a widow named Angela SCHINTGES.

For the years 1727 to 1778 records of baptism, marriage, and death are missing in Mondercange. I believe Child #5 Maria SCHINTGEN is my ancestress Maria who was the mother of the bride at the 1779 marriage at which her brother Hubert was a witness.

My Maria married Pierre CORNELY and had five children. Three of these children’s baptismal records include the names of people with the SCHINTGEN surname:

The questions these godparents bring up:

To learn more of the JOST or JACQUE connection in Schifflingen, the church records for that location need to be browsed. However, the earliest available records are baptisms for 1708-1778 and confirmations for 1745-1776. No marriages prior to 1779. Both too late to find Susanna JACQUE aka JOST who moved away from Schifflingen at the time of her marriage in 1713. Are there Luxembourg researchers who have worked with the Schifflingen church records or on the JOST or JACQUE families who would be willing to share? It would be helpful if someone would step forward as it would save me the time to extract all of the names into a table for analysis.