This young man was not easy to research. On the back of this photograph his name was written as . . . 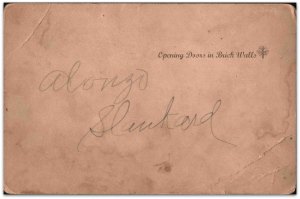 I spent a lot of time looking into Alonzo Oliver SLANKARD (1872-1935) until I found an Alonzo SLANKARD, age 23, a single boarder living in Pope County, Illinois, in 1900. Warning bells were ringing as Alonzo O. was 28 and married at this time. In 1900 there were two men named Alonzo SLANKARD, one born abt. 1872 living in Alexander County, IL in 1900 and the other born 1876 living in Jefferson, Pope County, IL.

Who was the younger Alonzo? William Alonzo SLANKARD was born 17 September 1876 in Pope County, Illinois, to Thomas F. SLANKARD and Loney JONES. In 1900 he was living only a few households away from Green Berry Lyon GLASS (1864-1933). Jefferson, Pope County, was the residence of the LILLIE and GLASS families who are included in this collection.

In 1918 on his World War I draft card William Alonzo SLANKARD is described as tall, medium build, blue eyes and dark hair. His permanent home was in St. Louis at the same address as Miss Lora SLANKARD who was his nearest relative. His employer was the City of Minneapolis. This matches entries found for him in the city directory of Minneapolis in 1914 and 1915.

William was 47 years old and still single in 1923 when he finally married in Salt Lake City to Belle RUSSELL. She was Della Belle LOE, divorced, and the daughter of Sam LOE and Mary BOWER of Massac County, Illinois. Her date of birth on the marriage record made her six years younger than she really was. William and Della lived in Denver, Colorado, in 1930 and 1940. They did not have children.

As the photograph of “Alonzo” was most likely taken in the 1890s he may have been a friend of one of Albert Spencer LILLIE and Pernecia Elizabeth GLASS’ older sons. I have not been able to find a family relationship.

Alonzo Oliver SLANKARD or William Alonzo SLANKARD? If you recognize this young man, I’d love to hear from you.