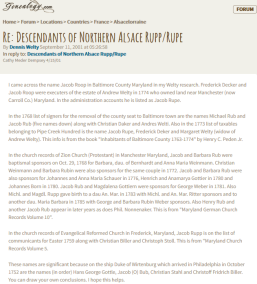 I can remember the day I learned the name of the ship my 6th great-grandparents Johann Jacob RUPP and Maria Barbara NONNENMACHER came over on even though it was nearly fifteen years ago. I can close my eyes and imagine the way my living room looked on that day. Very little is the same today as it was then. It has more to do with the day than with new furniture and decorating.

I received a notification of a reply to my message on the GenForum board for AlsaceLorraine, France, from Genealogy.com. Dennis Welty had seen my post dated 15 April 2001 concerning a trip I was planning to make to the Oberhoffen-lès-Wissembourg and Steinseltz area in Northern Alsace to visit the birthplace of Johann Jacob RUPP (1723-aft. 1792).[1] I was so excited reading his message.[2]

My husband called home as I was copying the post to send to Rupe/Roop researchers Louise Akers and Theron Rupe. He told me to check the news on TV as two planes had crashed into the World Trade Center. It was 11 September 2001, the fateful day our world changed. The thrill of being able to share the information from Dennis with Louise and Theron turned to a chill. The events of the day prevented me from celebrating.

At the time I was new to researching my American families. Dennis Welty wrote about things I had no idea how to find or access. But I trusted what he wrote and his conclusion. I shared with others but I did not try to follow through on how he made the discoveries until many years later.

A little over a week ago, while reviewing everything I have on my immigrant ancestor Johann Jacob RUPP (1723-aft. 1792), I checked some of the trees on Ancestry.com. I found a statement I made in Jacob’s notes in my GEDCOM file was attached to a tree in 2009 and has been saved to 46 other family trees.

Jacob and his family arrived in Philadelphia on October 20, 1752 on the ship “Duke of Wirtenburg” that sailed from Rotterdam and Cowes under Captain Daniel Montpelier.[3]

I was convinced the information Dennis Welty sent in his message was correct when I wrote the above. However at the time I did not include the source. One public family tree owner wrote this comment, “Can’t be true, not on 20 Oct 1752 ship list for Duke of Wirtenburg.”  I realized I needed to review everything Dennis Welty mentioned and at least try to find an original source for each part of his message in order to prove the ship.

I came across the name Jacob Roop in Baltimore County Maryland in my Welty research. Frederick Decker and Jacob Roop were executers (sic) of the estate of Andrew Welty in 1774 who owned land near Manchester (now Carroll Co.) Maryland. In the administration accounts he is listed as Jacob Rupe.

I searched through FamilySearch’s Maryland Register of Wills Records, 1629-1999 for Jacob RUPE’s will (none found) but not for Andrew WELTY’s. Last week I realized I needed prove what Dennis wrote by finding the will records mentioned above and adding them to  Jacob’s story. These are the records I found:

I hereby nominate and appoint my Trusty and well beloved friends Frederick Daker and Jacob Roop Executors of this my Last Will and Testament….2 November 1772 Andrew Welty

Seen as Jacob RUPE throughout the entire administrators’ bond, he signed his name Jacob RUB. Note: this is a copy of the original bond and the signatures are not the originals but show how the person signed. Jacob signed himself and did not leave a mark like George Fisher.

Baltimore County — March 30th 1773 then came Frederick Docker and Jacob Rupe Executors of the Testament and Last will of Andrew Welthy late of the County aforesaid deceased and severally made oath….

By finding the will, administrative bond, and inventory of the estate of Andrew WELTY, I was able to prove the first statement made by Dennis in his message.

In the 1768 list of signers for the removal of the county seat to Baltimore town are the names Michael Rub and Jacob Rub (five names down) along with Christian Daker and Andres Welti.

Christian DAKER and Andres WELTI signed with a mark. Also on the petition were three other men who would play a part in the story of the Jacob RUPP family: Dietrich REINHARTH, Johannes SCHAUER, and Anthon NOLL.

Michael and Jacob RUB left their mark (below) while another man left his signature which was transcribed as Jacob RUL [?].

In 1768 Jacob’s sons Jacob b. 1747 and Michael b. 1749 were over 18 years old but signed only with a mark. Did they not have the education their father received in the old county? From the 1772 administrative bond of Andrew WELTY’s estate we know the elder Jacob signed his surname RUB which may likely have been transcribed incorrectly as RUL (?) on this petition.

Also in the 1773 list of taxables belonging to Pipe Creek Hundred is the name Jacob Rupe, Frederick Deker and Margaret Welty (widow of Andrew Welty). This info is from the book “Inhabitants of Baltimore County 1763-1774” by Henry C. Peden Jr.

While searching online for Henry Peden’s book Inhabitants of Baltimore County 1763-1774 I virtually stumbled upon the scanned images of the 1773 tax list which I needed to confirm Dennis’ statement about Jacob RUPE being on the list of taxables with Frederich DECKER and Andrew WELTY’s widow.[8]

Before I found the 1773 tax list I located another tax list which is even more noteworthy. It will be discussed in detail in a new post. This much I can tell you, other researchers claim Revolutionary War service for Jacob RUPP however they are claiming the wrong patriot.

In the church records of Zion Church (Protestant) in Manchester Maryland, Jacob and Barbara Rub were baptismal sponsors on Oct. 29, 1768 for Barbara, dau. of Bernhardt and Anna Maria Weinmann. Christian Weinmann and Barbara Rubin were also sponsors for the same couple in 1772. Jacob and Barbara Rub were also sponsors for Johannes and Anna Maria Schauer in 1776, Henrich and Anamarya Gottier in 1780 and Johannes Born in 1780. Jacob Rub and Magdalena Gottiern were sponsors for George Weber in 1781. Also Michl. and Magdl. Rupp gave birth to a dau An. Mar. in 1783 with Michl. and An. Mar. Ritter sponsors and to another dau. Maria Barbara in 1785 with George and Barbara Rubin Weber sponsors. Also Henry Rub and another Jacob Rub appear in later years as does Phil. Nonnenaker. This is from “Maryland German Church Records Volume 10”.

The above events brought up by Dennis Welty were easily confirmed many years ago (2001) when Louise Akers sent me the book with the compilation of English translation of the German church records.[9] [Keep in mind the presence of persons with the surname GOTTIER above.] I don’t have actual images of the church records and have not tried to find where the collections are kept.

In the church records of Evangelical Reformed Church in Frederick, Maryland, Jacob Rupp is on the list of communicants for Easter 1759 along with Christian Biller and Christoph Stoll. This is from “Maryland Church Records Volume 5.

The 1768 petition mentioned earlier was practically a census of all adult males over 18 as the referendum for and against the change of the county seat was circulated throughout Baltimore County. Jacob RUPP and his sons’ appearance on the petition was the earliest known sighting of the RUPP family in Maryland and in America.

Dennis’ statement (above) gives a new and earlier sighting. I have not been able to confirm Jacob RUPP was on a list of communicants with Christian BILLER and Christoph STOLL in 1759 at Easter as I do not have Volume 5 of this series of Maryland Church Records or access to the records. All previous information Dennis wrote about has been confirmed and it is only a matter of time before this statement will be proven as true.

This was the first mention of Christian BILLER and Christoph STOLL. They were not on the 1768 petition or the 1773 tax list with Jacob RUPP which suggests they remained in Frederick County while Jacob moved [check formation of counties] to Baltimore County between 1759 and 1768. What makes finding these three men on the list of communicants so remarkable is Dennis’ next statement:

These names are significant because on the ship Duke of Wirtenburg which arrived in Philadelphia in October 1752 are the names (in order) Hans George Gottle, Jacob (O) Bub, Christian Stahl and Christoff Fridrich Biller. You can draw your own conclusions. I hope this helps.

At the Court House at Philadelphia on Friday, the 20th October 1752 Joshua Maddox, Esqr. met the foreigners, whose names were recorded, imported in the ship Duke of Wirtenburg, Daniel Montpelier, Commander, from Rotterdam by way of Cowes. All adult male passengers age 16 and above signed the oath of allegiance. A transcribed list was found online[10] as well as in the book Pennsylvania German Pioneers. A Publication of the Original Lists of Arrivals in the Port of Philadelphia from 1727 to 1808 by Ralph Beaver Strassburger, William John Hinke.[11]

The names listed by Dennis Welty were found in the book – next step would be to view the original oath of allegiance list for the passengers who came over on the Duke of Wirtenburg to determine if the name Jacob BUB was transcribed incorrectly and should be Jacob RUP. An email query has been sent to the Pennsylvania State Archives – wish me luck.

You can draw your own conclusions

I believe Dennis Welty was correct when he pointed me to the Duke of Wirtenburg being the ship my ancestor Johann Jacob RUPP came over on in 1752. To further support this I would like to note the information found in two other sources which do not include the name of the ship but give 1752 as the year of immigration.[12], [13]

This exciting news, received on 9/11, was overshadowed by what followed several hours later but it taught me a wonderful lesson about reaching out, sharing and helping others, and giving credit where credit is due. If you would like to include this post in your family tree, please do not copy/paste it as errors made [it happens] may be corrected at a later date. Instead please feel free to include a link back to this article. Thank you.