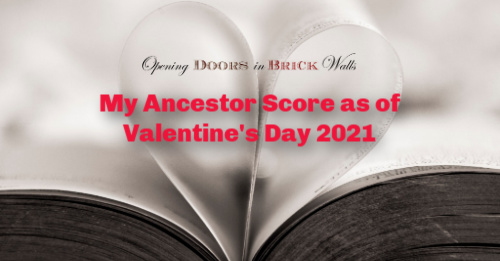 It’s time for my Ancestor Score!

We would not be here without the ancestral couples who came before us. What better day to feature them than on Valentine’s Day. Nearly all of my ancestors were married, some cut it close, and two ancestresses never bothered to marry.

I’ve been writing about The Ancestors since I began blogging, going back one generation at a time. Generations 2 through 7 are complete except for one set of 4th great-grandparents. The 8th generation is off to a good start with nearly a dozen couples’ stories already written. Vital statistics, spouses, children, residence, occupation, ownership, military service, and miscellaneous biographical information were used in the stories.

There are close to 400 known ancestors in the next four generations – many have baptism, marriage, and burial records, some have more biographical detail,  while others may only be names gleaned from their children’s records. 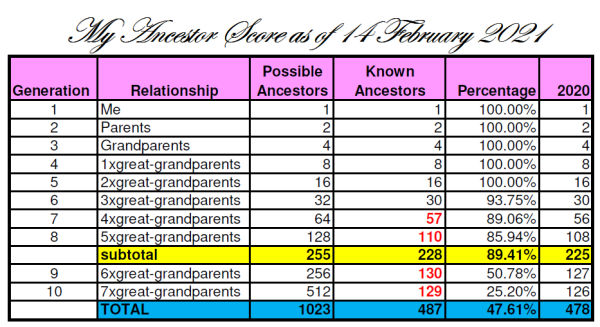 Nearly 90% of my ancestors are known up to generation 8. The numbers go down significantly in the next two generations due to the brick walls in my paternal lines in the US.

New Names in the Family Tree

The name of Henry TREADWAY’s first wife was found this past year in a book with a series of sketches on early families of Steubenville and Jefferson County, Ohio, written by Mrs. Mary Donaldson Sinclair  (1862-1940) in the early 1930s, and published at that time by The Steubenville Herald-Star. The article included not only Henry TREADWAY’s wife’s name but also her parents’ names and where they were from. Three new names in the family tree (generations 7 and 8) need to be researched. Perhaps they will firm up the assumption that Henry TREADWAY and Sarah JOHNSON were the parents of my 3rd great-grandmother Sarah Ann TREADWAY. DNA matches to descendants of three other children of Henry have been found in one cluster and are the reason I’ve taken a closer look at available publications.

Henry TREADWAY and his wife are the 4th great-grandparents I mentioned above that have not yet been featured on my blog. I plan to take time to review the research I’ve done and, finally, write about them sometime this year. 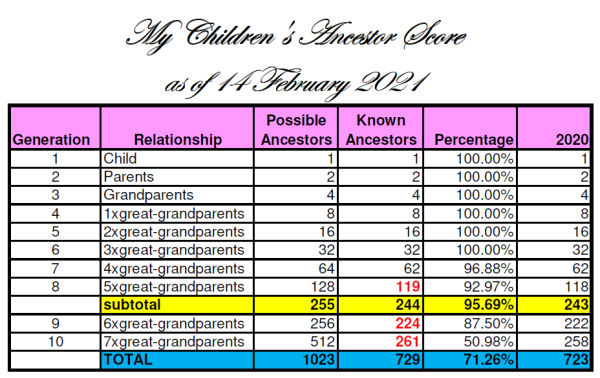 My children’s numbers are looking a lot better than mine as their paternal line is Luxembourgish. The 4% missing in the subtotal up to generation 8 is due to my DEMPSEY, DOSS, and COOLEY brick walls, as well as, one set of 5th great-grandparents that is unknown on their paternal side.

How do you keep track of your ancestors?

I learned this way of keeping tabs on the progress of genealogy research on Barbara Schmidt’s blog Connecting the Worlds in 2014. This is my 8th year doing the Ancestor Score on Valentine’s Day.

The posts from previous years can be found here: 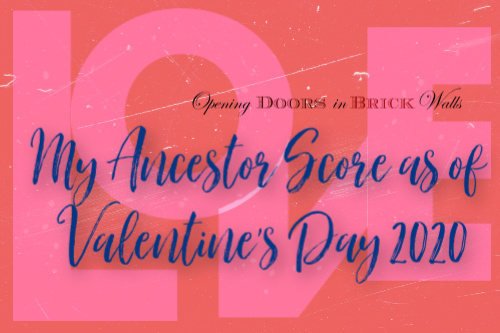 It’s time for my Ancestor Score!

This is my seventh year doing the Ancestor Score on Valentine’s Day.  I first read about this way of keeping tabs on the progress in my genealogy research on Barbara Schmidt’s blog Connecting the Worlds in 2014. 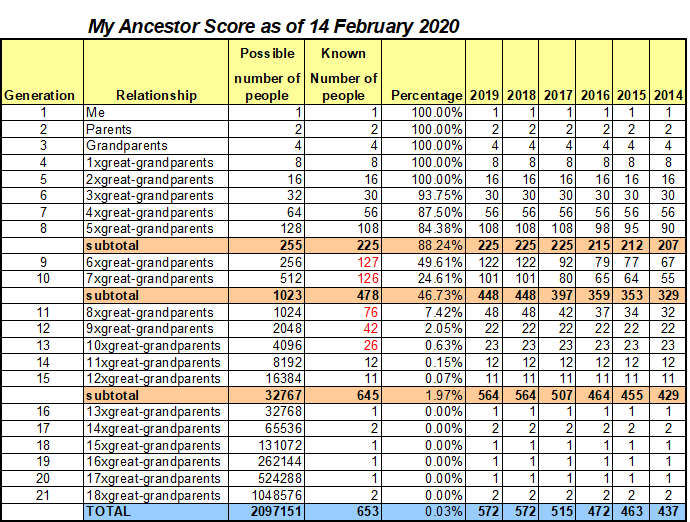 In the first eight generations, there were no changes. I’m still missing my 3rd great-grandparents Mr. and Mrs. DEMPSEY. In generations 9 through 13, new ancestors were found, mostly on my maternal side. In all, I have 81 new ancestors.

Stats for the previous years are included for comparison in the table above and below (for my children). 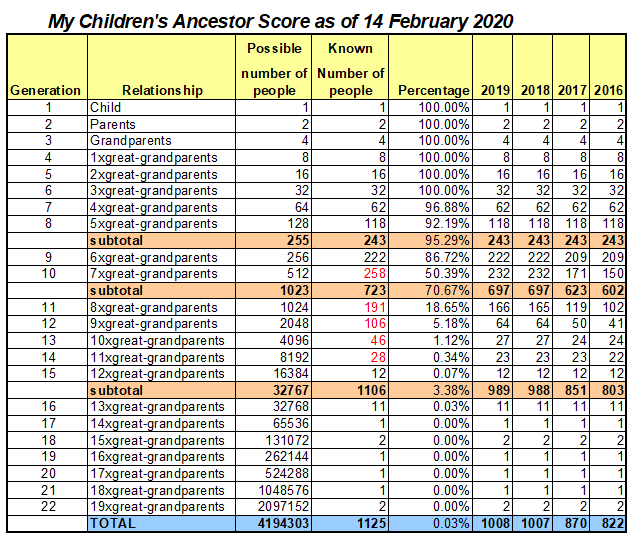 [There are a few more cases of pedigree collapse in the family tree. I haven’t considered reducing the number of possible ancestors in each generation to reflect duplicates.]

Please leave a link in the comments below if you’ve recently calculated your Ancestor Score. I’d love to take a look.

Wishing you a year full of love and meaningful friendships.

The posts from preceding years can be found here: 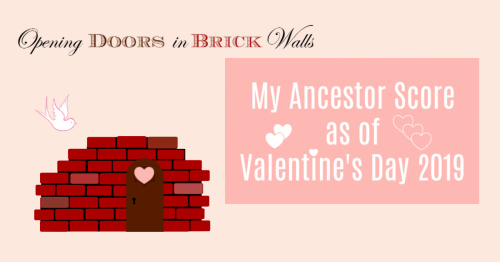 It’s time for my Ancestor Score! Short and sweet.

This is my sixth year doing the Ancestor Score on Valentine’s Day.  I first learned this way of keeping tabs on the progress in my genealogy research from Barbara Schmidt in 2014.

I almost didn’t bother with doing this post as the numbers have barely changed. 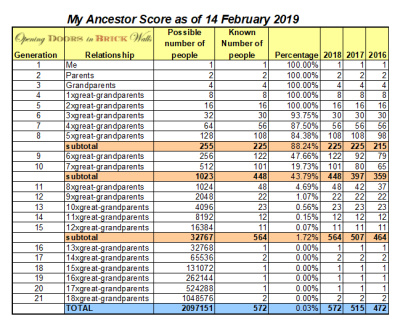 I didn’t add any new ancestors to my family tree since last Valentine’s Day. Those 3rd great-grandparents Mr. and Mrs. DEMPSEY are still missing. The man who made Levina DOSS my 5th great-grandmother is an absentee. Mr. and Mrs. COOLEY are also unaccounted for. Mr. TREADWAY who I’ve been including in the count has never been written about here since he has not been proven. Earlier this week a DNA match turned up and points to the possibility of his being the father of my Sarah Ann TREADWAY. If I get it sorted out this year I should be able to add several generations to the TREADWAY branch.

My children’s ancestor score increased by only one – an 8th great-grandparent. 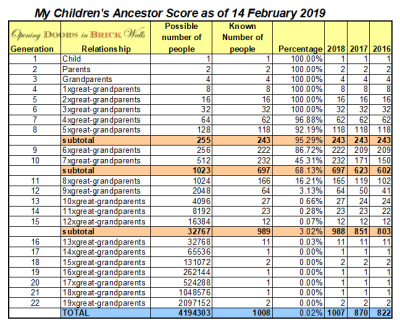 Stats for the previous four years are included in both tables above. The posts from previous years can be found here:

Have you done your Ancestor Score recently? I’d love to have a look. Please post your link in a comment below. Thank you and Happy Valentine’s Day. 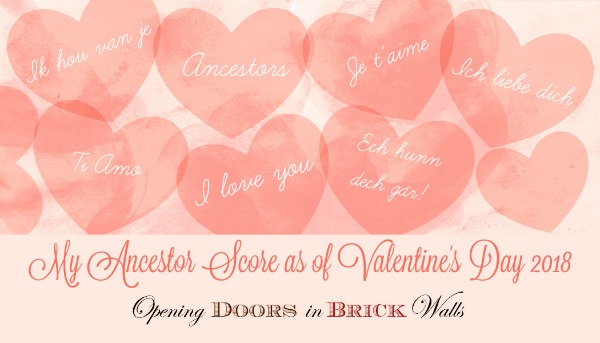 Valentine’s Day reminds me of the couples who came before me – without whom I would not exist.

This is my fifth year doing the Ancestor Score on Valentine’s Day.  I first learned this way of keeping tabs on the progress in my genealogy research from Barbara Schmidt in 2014. She posted her latest Ancestor Score February 2018 last week. 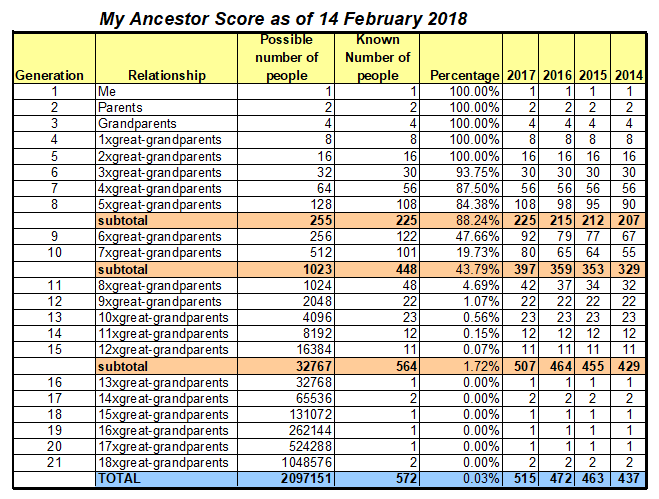 Generation 6 is still hanging in there at 30 of 32 ancestors. I continue to search for the key to the door of my most frustrating DEMPSEY brick wall. Who were the parents of William A. W. DEMPSEY 1820-1867 of Fayette County, West Virginia?

I wrote the above last year and it’s still the case and has been for at least a half-dozen years or longer.

My focus this year is on the American ancestors as I organize and set up the groundwork for more serious DNA research. I am now seeing descendants of William A. W. DEMPSEY in my matches. I have matches for descendants of his four sons (James Alexander, John Henry, William Henderson, and Elijah Lewis) and daughter Mary Virginia. I’m still looking for matches who descend from Lizzie and Eunice, the other two daughters. All I need is for all of the matches to upload their raw DNA to GEDmatch so I can compare the chromosomes, separate the chromosomes coming from his wife Sarah Ann WOOD, and compare all unknowns with what is left in hopes of finding matches who descend from William’s parents, grandparents, or great-grandparents. Sounds easy?

My children’s ancestor score looks a lot better mostly due to their paternal line being mainly from Luxembourg. Ninety-five percent of their ancestors to the 8th generation are known. Their numbers for the next two generations are quite high compared to mine – even when you consider the difference in generations. 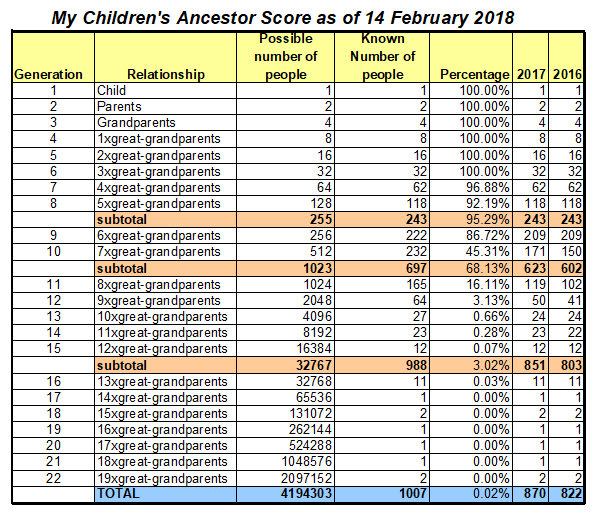 Have you done your Ancestor Score recently? I’d love to have a look. Please post your link in a comment below. Thank you and Happy Valentine’s Day. 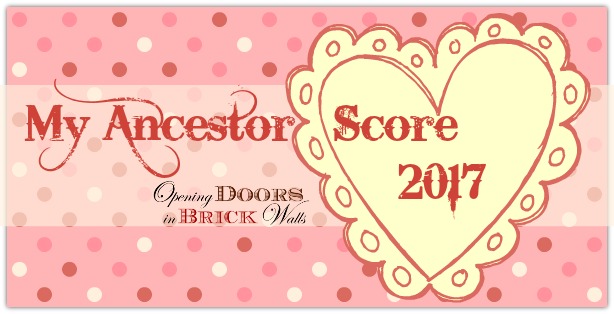 Valentine’s Day, which is celebrated in many countries on the 14th of February, is the time for people to show feelings of love and affection. Without the couples who came before us, we would not exist. Most were married, some cut it close, and at least one lady gave us a non-paternity event.

This is my fourth year doing the Ancestor Score on Valentine’s Day after reading Barbara Schmidt’s “My Ancestor Score – February 4, 2014” post in 2014. [Update: The link to the 2014 post no longer works. She’s moved her blog but not all the content is up. Here’s her My Ancestor Score February 2017.]

The names of 43 new ancestors were added to my family tree database during the year. This is nearly five times more than those added in 2016. Many of these are due to my now having access* to the Family Books of German towns where my ancestors lived and the recent work I’ve been doing with the church records of Luxembourg. The new additions are in the 5th to 8th great-grandparents’ generations. The new ancestors who lived in areas which are now Germany have names and dates. Records are being found in the church records of Luxembourg for those who lived in these German towns which belonged to parishes in Luxembourg at the time.

* Thanks to our newly opened Luxracines library in Walferdange, Luxembourg. 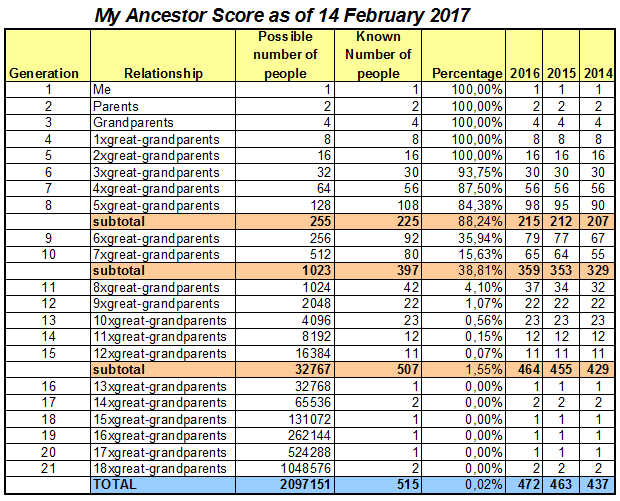 Generation 6 is still hanging in there at 30 of 32 ancestors. I continue to search for the key to the door of my most frustrating DEMPSEY brick wall. Who were the parents of William A. W. DEMPSEY 1820-1867 of Fayette County, West Virginia? As the administrator of my youngest brother’s DNA, I’m beginning to see several cousins, with shared matches, who descend from his daughter Mary Virginia DEMPSEY and son-in-law John A. SNELL who married in 1872.

My children have 355 more known ancestors than I do. Their paternal ancestry, being mostly Luxembourgish, helps to bring in a whopping 95% score for the first 8 generations – up to their 5th great-grandparents. Even at 10 generations they have 61% compared to my 39%. 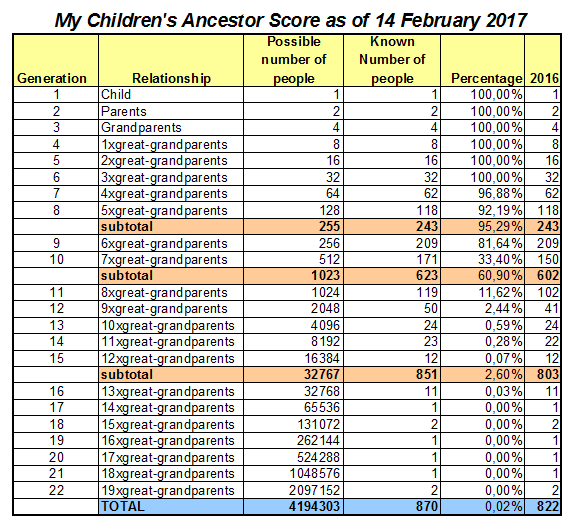 Have you done your Ancestor Score recently? Please post your link in a comment below so that I can visit and have a look.

This is my third year doing the Ancestor Score on Valentine’s Day. I’d like to thank Barbara Schmidt who got me started with her post My Ancestor Score – February 4, 2014.

We would not be here without all the Valentine couples who came before us. Most were married, some cut it close, and at least two Doss ladies gave us non-paternity events. 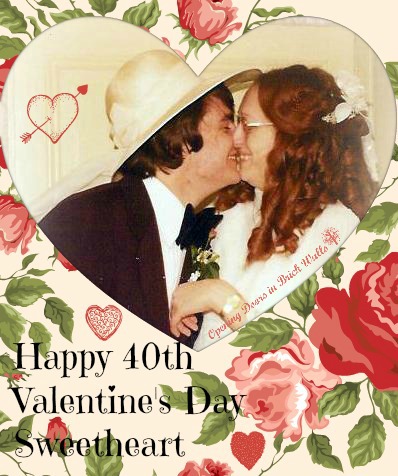 Nine new ancestors were added since last year – thanks to the church records in Luxembourg. This is not much compared to the 26 from 2015 but as you can see (in the second spreadsheet) I have also been working on my children’s bloodline. 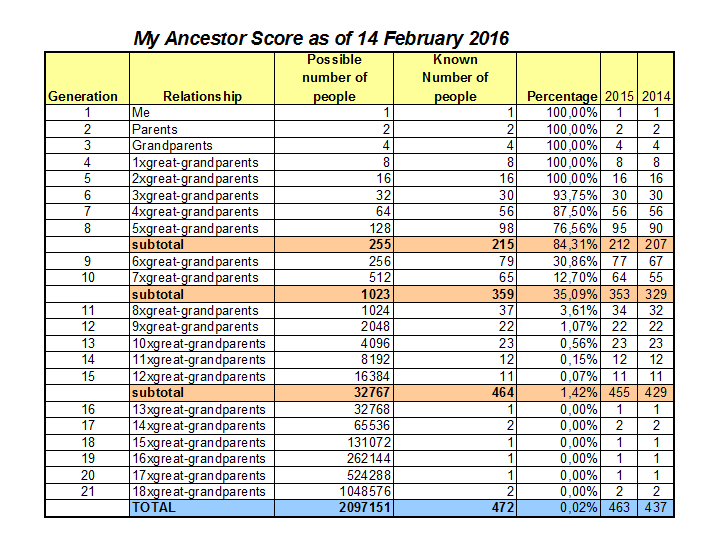 Generation 6 is still hanging in there at 30 of 32 ancestors. I continue to search for the key to the door of my frustrating DEMPSEY brick wall. Who were the parents of William A. W. DEMPSEY 1820-1867 of Fayette County, West Virginia? 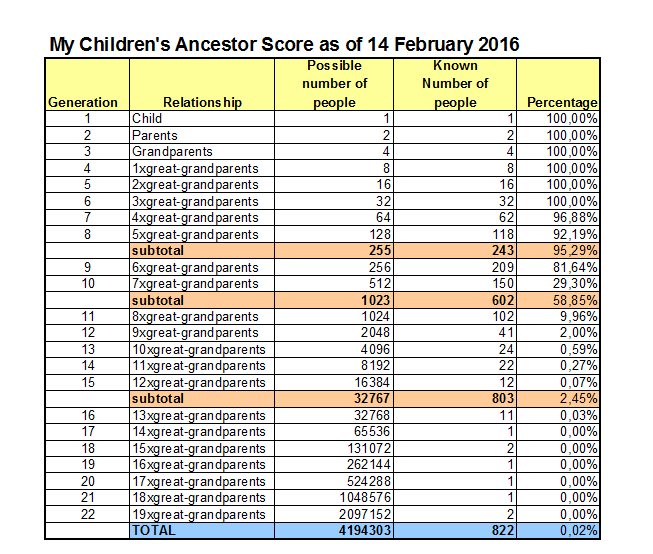 Have you done your Ancestor Score recently? Post your link in a comment and I’ll have a look.