Be still my impatient genealogy heart….

My new duties as treasurer and member of the board of Luxracines have kept me busy this summer.

Last year my genealogy association Luxracines bought a very large collection of German family books from Peter Daus of Wittlich, Germany. On 30 September 2015, we moved the library from Wittlich to a temporary storage area in Luxembourg.

The permanent location of Luxracines‘ new locale was not yet available. The Commune of Walferdange had agreed to provide a rent-free location which was to be repainted before we could furnish it and move in our new collection of books.

The day the keys to our new locale were given to our president Rob Deltgen finally came. We held our first committee meeting there on June 14. There were a few tables and chairs but the rooms were otherwise bare. Plans were made for obtaining estimates and buying equipment, etc.

By mid-July lockers, computers, and bookshelves had been purchased. Locks were put on the doors to the three rooms we are using. A work plan was drawn up for July 19, 22, 26 and 27 to assemble the lockers for the conference room, the bookshelves for the library, and to set up the computers and printer in the computer room.

The conference room (below) will be shared with the ladies who run the child care center located on the first floor. As it is open in the mornings, Luxracines is only allowed to use the locale in the afternoons or when the center is closed.

The books were transported from temporary storage to the basement of our building. On July 27 over a dozen members, including some spouses, came in to help carry the heavy boxes filled with books from the basement to the 2nd floor. Due to lack of space, all of the books were placed in the bookshelves as they came out of the boxes. 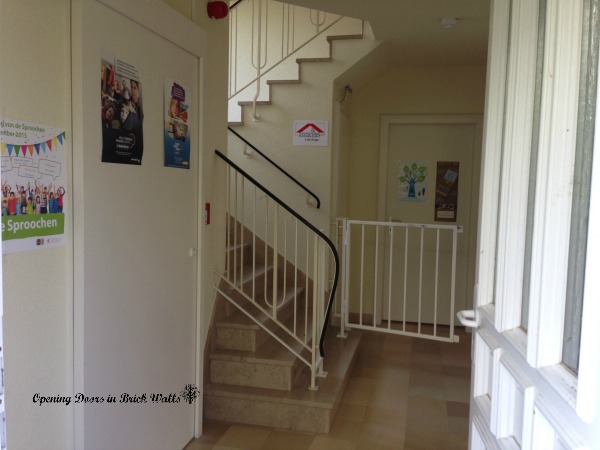 On August 3 several members came in to remove black marks on the floor, clean up and get rid of empty boxes, and hang posters on the empty walls of the computer and conference rooms. We wanted to be ready for our first official visitor the next day. Sara Bamberg of the Luxemburger Wort, Luxembourg’s daily newspaper, was coming to do an interview for an article on Luxracines and our new library.

On August 9 Peter Daus visited (above) and brought along more books and genealogical material he no longer needed (on the table). This particular item (below) caught my eye.

As more donations of books are expected from other members we bought more bookshelves and set them up in the computer room on August 17 (below). This will likely contain mostly Luxemburgensia. This term is used for all books and media published in Luxembourg, written by Luxembourgish authors, and/or about Luxembourg.

On August 18 Sara Bamberg’s article “Genealogy per Mouse Click” was published in the Luxemburger Wort. It was good advertisement for our club as many new members subscribed in the days following the piece.

On August 27 we began sorting through the books and re-arranging them in the bookshelves.

An afternoon’s work and we had A-C alphabetized, arranged in 1 1/2 bookshelves, and entered into an Excel document. It was similar to working one of those sliding tiles puzzles.

On August 31 we continued our work. Two persons sorted out all the books by letters of the alphabetic, our secretary worked on the Excel document inputting the books from German towns beginning with D through H, while I alphabetized the books from D through P.

Things were busy that day as other workers were in the building including a firm that installed alarms, smoke detectors, and fire extinguishers. 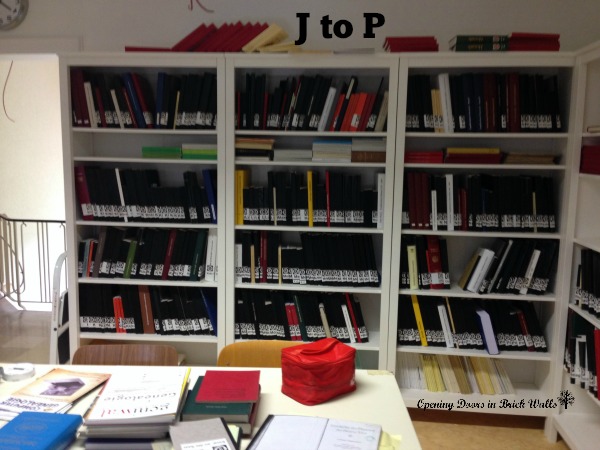 On Saturday afternoon, September 3, we finished sorting of the German family books from R through Z and put some order in the remaining books. In the weeks to come, we will complete the inventory of the family books and begin to work out a system for the rest of the miscellaneous books.

We will begin the printing unique call numbers for each book for easier access by our patrons as soon as the inventory is completed. And, the sliding tiles puzzle will finally be complete.

The driving force behind this project has been our president Rob Deltgen. Without his leadership, the committee, other members of the club and even spouses of some of the members would not have been as organized as we were to set up the library over the summer months when many people are usually off on vacation.

An official opening is in the planning. Luxracines Club House (Vereinslokal) will open its doors to members and the public on Saturdays from 2 p.m. to 5 p.m. during the month of September.

13 thoughts on “Behind the Scenes at Luxracines”